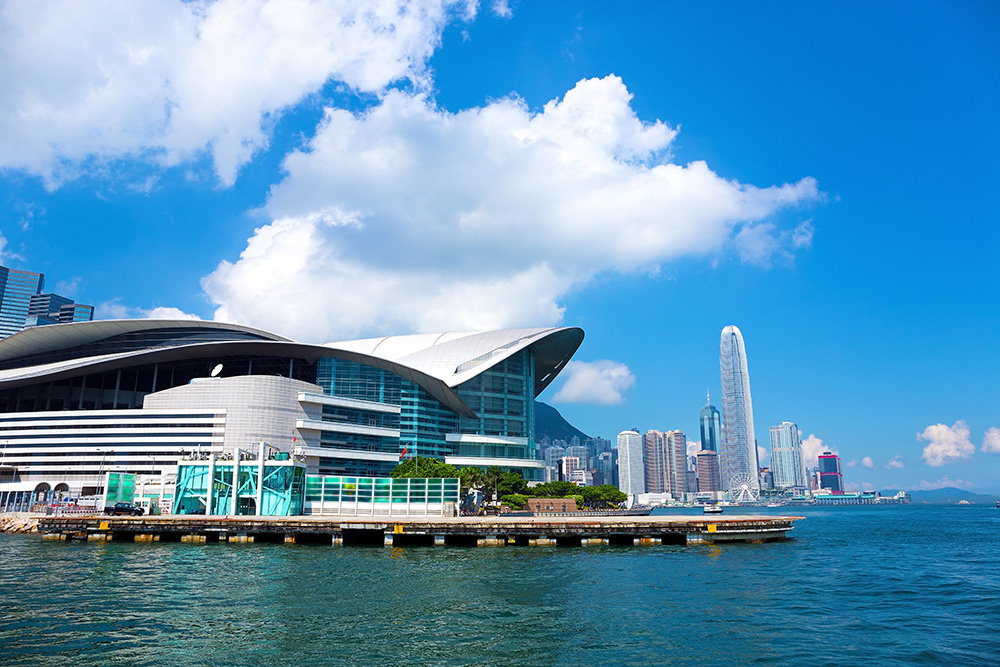 Hong Kong Convention and Exhibition Center is owned by the Hong Kong Trade and Development Council and is one of the occupants of the seaside building complex, located at 1 Expo Drive, Wanchai, Hong Kong. Many important international conferences have been held here, including the ceremony celebrating Hong Kong’s return to China on 1st July 1997. It is also the center of many trade activities in Asia.

HKCEC is an international-standard venue for conferences and exhibitions. It is adjacent to two five-star hotels, an office building, and a luxury apartment. Its newest wing was expanded through land reclamation and is located on an artificial island. The building has three huge exhibition halls, divided into three floors, it contains exhibition halls of different sizes as well as conference halls. The auditorium in HKCEC is one of the largest banquet halls in the world and can accommodate 4,300 people.

The second phase of HKCEC – the Golden Bauhinia Square, is a seaward facing building with a meaningful message. It does symbolize the return of Hong Kong with the Golden Bauhinia statue, and is also the venue for the daily flag-raising ceremony of Hong Kong. It has great meaning for Hong Kong and the unique shape of the building, which resembles flying birds spreading their wings, adds beauty to Victoria Harbour’s skyline. Every day, from 7:50 to 8:03 in the morning, police officers in uniforms preside over the flag-raising ceremony and the national anthem is played.

The HKCEC has many accessibility adaptations for those with disabilities. For example, the entrance to the center is a gentle slope and also boasts a spacious elevator to allow wheelchair users to enter easily. The information counter features braille directory and teleloop system (hearing aid system). Moreover, there are directories for the blind, accessible restrooms, and special parking spaces inside the center. 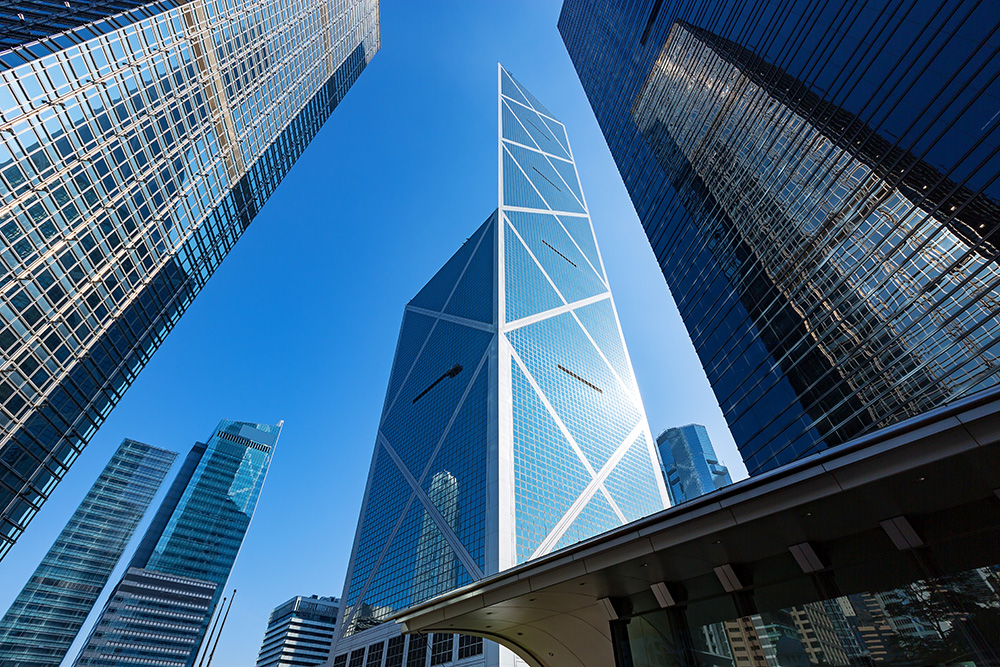 The Bank of China Tower is the headquarter of the Bank of China in Hong Kong. It is located at 1 Garden Road, Central and Western District, Hong Kong. It was designed by a famous Chinese-American architect, I.M. Pei, in 1989 and is part of the economic and financial core of the Central District. Ever since, this building has won many awards, including the 2002 Hong Kong Building Environment Assessment where it received a rating of “Excellent” and was listed among the Hong Kong Institute of Architects’ Top Ten Best Buildings in Hong Kong in 1999.

The shape of the Bank of China Tower is inspired by bamboo, each trunk reaching higher and higher as they grow, symbolizing strength, vitality and growth. The granite exterior wall on the ground floor symbolizes the Great Wall of China. It is composed of four triangular columns of different heights with two triangular gardens on either side, which matches the triangular theme of the building. Every flower, plant, and tree in the garden alludes to Chinese landscape painting.

The four floors at the top and the first 19 floors in the Bank of China Tower serve as offices for the Bank of China, Hong Kong. The other floors are leased out. There are more than 100 companies in the BOC Tower. The 70th floor is also set up as the main viewing area and named the “Seven Halls”. The banquet hall can host all kinds of grand parties, with a high-sloping glass roof above the banquet hall. The designer used lighting as a design feature for the building, characteristic of Pei’s famous saying, “Let the lighting do the design”.

The exterior lines of the BOC Tower are simple yet well-defined. The reflective glass matches the wide, smooth metal panels, inlaid on the four corners of the building. The middle of each surface is marked by a diagonal silver cross which gives us a modern impression, which is anti-traditional, anti-glamorous, anti-cumbersome. Most importantly, this building has become a new symbol of Hong Kong. 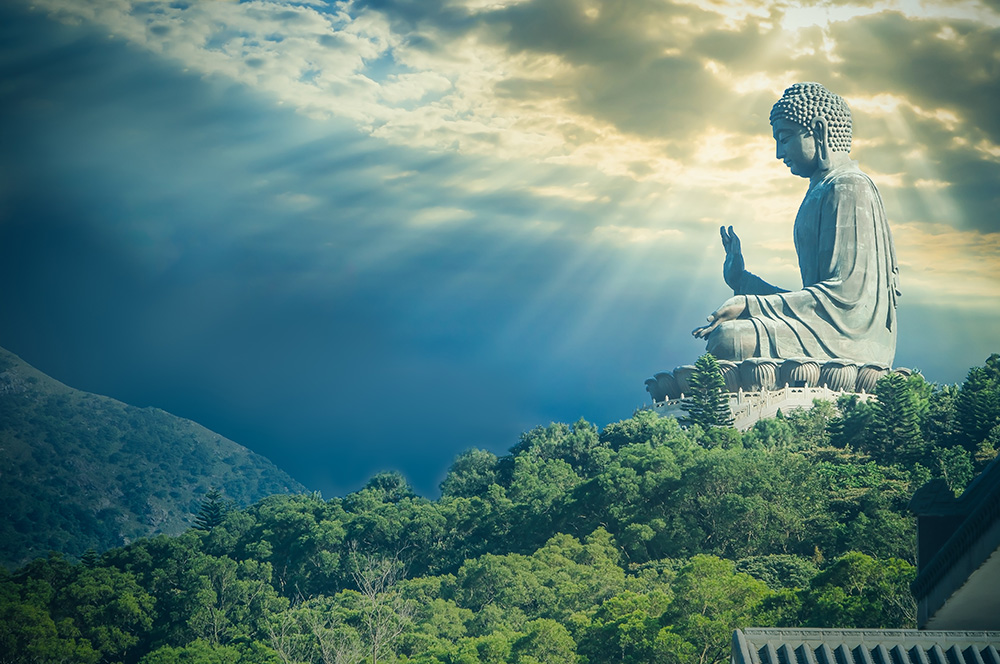 The Big Buddha is located on the Muyu Peak of Lantau Island in Hong Kong at an altitude of 482 meters above sea level. It is the world’s tallest outdoor bronze sitting Buddha statue. It took the Po Lin Monastery 12 years to build this giant Buddha. It represents the wishes for Hong Kong’s prosperity, for the future of Hong Kong, as well as the country’s peace and security. As a crucial landmark in Hong Kong, there are countless believers and tourists from China and abroad who visit. In addition to its outstanding artistic attainments, this giant Buddha is also a precious cultural heritage of mankind.

The Big Buddha is 26 meters high, weighs 220 tons, and is constructed by 200 bronze castings. The face of the Big Buddha is based on the Lushana Buddha in the Longmen Grottoes, which is round and beautiful. The headdress and the texture of the clothes reference the Buddha statue of Sakyamuni in Cave 36 of the Dunhuang Grottoes, which is smooth. Big Buddha combines the characteristics of the sculptures from the heyday of Buddhism during the Sui and Tang dynasties and the creator’s own whimsical ideas. The big Buddha sits on a lotus, which represents rising above the sinful.

Every detail of the Buddha statue contains profound religious significance. The face of Buddha itself is like a full moon, the forehead is wide and flat, and his lobed ears show the Buddha’s blessings, wisdom, and perfection. The Buddha’s kind smile makes all beings happy. Between his brows, there is an auspicious Urna spiral symbol that is white and soft as cotton rotating to the right, representing the Buddha proclamation of the truth and righteousness of all beings. Buddha’s palms are long and round, soft and firm. The right hand shows the Abhaya Mudra gesture, representing the Buddha’s compassionate wish to save sentient beings. The left-hand rests on the leg, with the palm facing outward, and the fingertips tilting slightly downward. This is called Varada Mudra, which represents the sharing of blessings and kind wishes for all beings. The Dharma wheel in the center of both palms represents the eternal existence of Dharma, circulating in ten directions. The character “卍” on the chest represents the dignity of Buddha’s solemn morality.

The Big Buddha combines the essence of ancient and modern Buddhist achievements, it merges traditional bronze craftsmanship with modern technology, as well as representing the most ideal state of peace pursued by mankind.

Location: In front of the Po Lin Monastery, Hong Kong 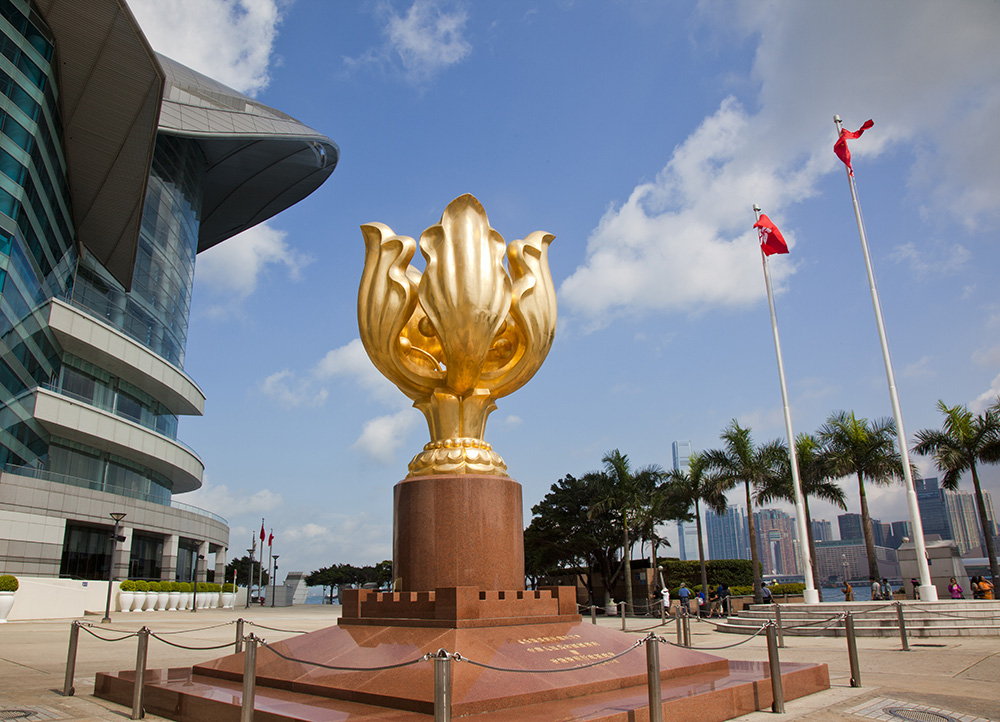 The Golden Bauhinia Square is surrounded by Victoria Harbour on three sides and in the center of the port, facing Tsim Sha Tsui. It is an attraction for many visitors to Hong Kong. In a corner of the square, there is also a 20-meter-high monument commemorating the return of Hong Kong which is made with 206 slabs, each representing a year from 1842 to 2047. The monument is divided into three parts: a foundation stone made of solid and durable granite, a stele column and a turquoise bronze wrought column head. The front of the column is engraved with words from President Jiang Zemin. The white ring on the top of the monument to Hong Kong’s return to China symbolizes the return of Hong Kong’s sovereignty to China, and the 50 rings above represent the promise that Hong Kong Special Administrative Region’s economic and political systems shall remain unchanged for 50 years.

Location: in the Hong Kong Convention and Exhibition Center’s newer expansion along the waterfront 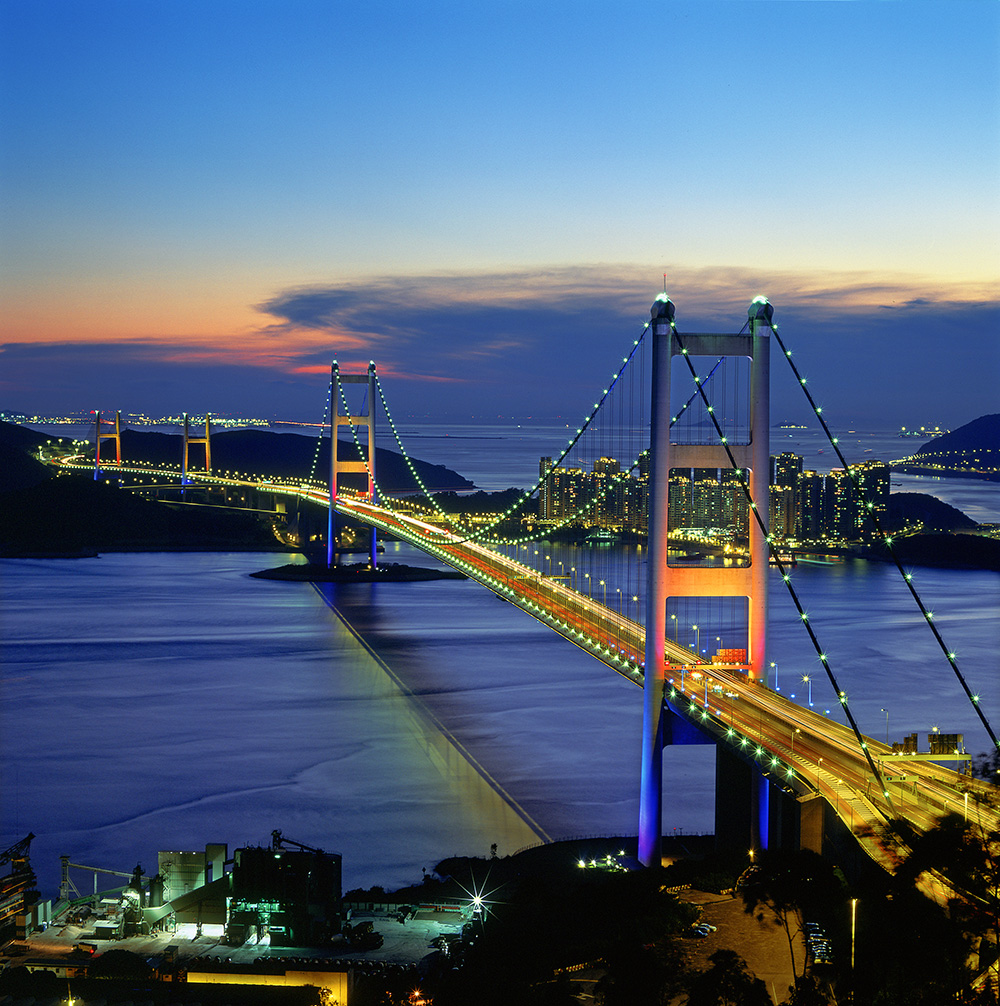 The Tsing Ma Bridge, was opened to the public on 22nd May 1997. The total length of the bridge is 2,160 meters while the main span is 1,377 meters. It starts from Tsing Yi Island in the east, crosses the Ma Wan Strait, and ends at Ma Wan Island in the west. The upper level is a two-way six-lane urban expressway, and the lower level is a dual-track railway. Tsing Ma Bridge is not only the main connection between Tsing Yi and Ma Wan Island, it is also a part of the larger Lantau Link roadway in Hong Kong.

Tsing Ma Bridge runs from northeast to southwest. It is composed of a main span which was built on top of water, a north-south bridge approach, two tower columns, and multiple interchange ramps. The Tsing Ma Bridge is designed to be flexible. It adopts double-layer steel suspension technology for road and rail. The upper and lower floors are mutually flexible. In the event of strong winds or emergency, the lanes can be changed at any time to keep traffic smooth.

Since 20th August 2017, the Lantau link has implemented two-way tolls. For example, cars and taxis are charged 15 HKD for a round trip. Also, since it is located on top of the Ma Wan Strait, it is inevitable that Tsing Ma Bridge will be closed temporarily in the case of severe weather such as storms. At these times, no vehicles will be allowed to pass through.