The Oriental Pearl Radio & Television Tower is one of the iconic landmarks in Shanghai and is classed as a national 5A tourist attraction.

As the first key project after Pudong was opened to the international world, the Oriental Pearl Television Tower has been playing an important role in publicity. Within 10 years of its opening, it has hosted 295 foreign leaders, held nearly 100 important world-class conferences, and more than 300 large-scale events. It has become a significant window through which Shanghai presents itself to the outside world.

The Oriental Pearl Television Tower is also an important tourist attraction within Shanghai. Its main tourist facilities include a sightseeing floor, an exhibition hall, and a rotating restaurant. In addition to the 50-meter diameter, lower sphere, outdoor observation gallery and the 259-meter suspended corridor observation gallery, there are also space capsules on the observation floor, creating a science fiction charm and futuristic style.

Within the tower, there is an exhibition hall which depicts Shanghai’s history of urban development. In the museum, the six exhibition halls are filled with a variety of different themes. Visitors will get a sense of the atmosphere living in old Shanghai, and when it opened as a port. There are hundreds of precious historical relics, hundreds of scaled down, intriguing buildings, 117 life-size wax figures, and nearly a thousand small wax and clay figurines. All of these helps to bring the development of Shanghai to life.

The tower also features a rotating restaurant, 267 meters high up in the upper sphere, where 350 guests can be accommodated. 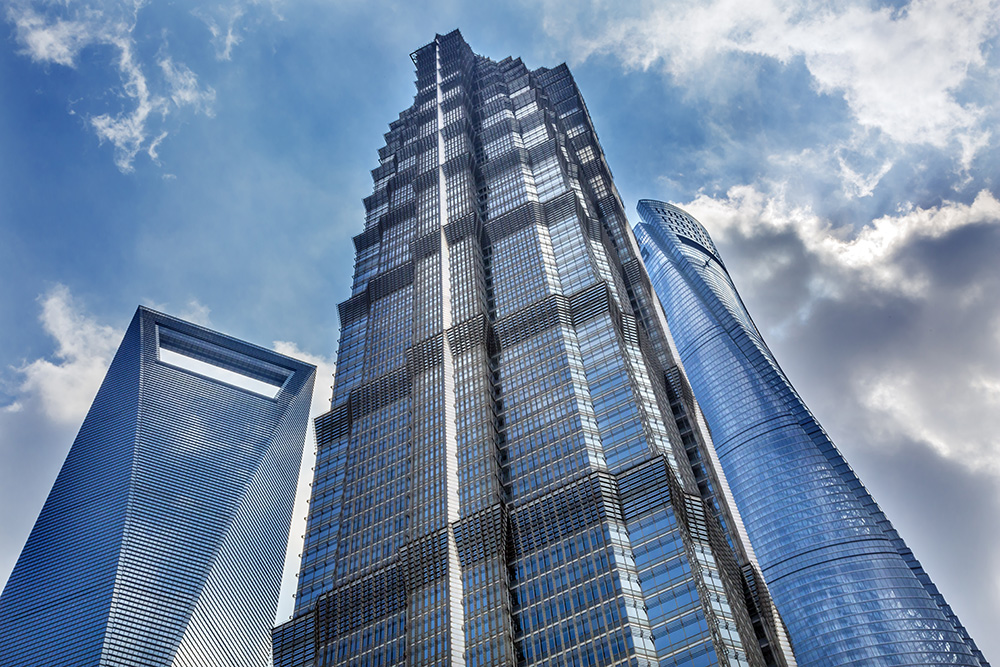 The Jin Mao Tower, also known as the Jinmao Building, is the second tallest skyscraper in Shanghai, the third tallest in the Mainland China and the eighth tallest in the world. It has 88 floors above ground. If the floors in the spire are included, there are 93 floors in total. There are a further 3 floors underground. It is one of the main landmarks of Shanghai, and serves as a modern office building, five-star hotel, convention center, entertainment center, and a shopping mall amongst other facilities.

The Jin Mao Tower is a high-tech building. Floors between 3rd to 50th are spacious office areas with bright column-free, open plan, spaces that can accommodate more than 10,000 people. The 51st and 52nd floors are mechanical floors. The 53rd to 87th floors contain the world’s highest five-star hotel, the Grand Hyatt Shanghai. The atrium of the hotel goes from the 56th floor to the top of the tower’s core. It has a 27-meter diameter and is 142-meter high. This “air atrium” catches the sunlight, casting a beautiful glow within. Surrounding the atrium are 555 guest rooms that come in different sizes and styles, and with a variety of Chinese and Western restaurants. The 86th floor is a club for entrepreneurs; the 87th floor is a restaurant with panoramic views; the 88th floor is the second highest observation deck in China which can accommodate 1,000 visitors at any given time. It offers a spectacular view of the city which spreads out on both sides of the Huangpu river and the Yangtze Estuary.

From the inside of the tower, you can see the world’s best hotel atrium. The corridors are as beautiful as rows of galleries. The incomparable hotel atrium of Jin Mao Tower has been praised by architects, scientists, and writers as “golden rings” and a “time tunnel”.

On the 88th floor, there is also the highest “air post office” in China. The postal service office on the 88th floor of Jin Mao Tower provides tourists with collectable stamp products and unique services. The museum also has a digital photography service, allowing visitors to take home with them a permanent memorial.

Shanghai Exhibition Center is located in the Jing’an District of Shanghai. It was built in 1955 and was also called the Shanghai Exhibition Hall. It was the first large-scale building built in Shanghai in the 1950s. The exhibition center is the choice venue for important exhibitions, whether domestic ones or international ones. Also, it is where the Shanghai Municipal People’s Congress, the Political Consultative Conference and the Government Work Conference are held. In September 2016, it was listed in the first batch of buildings placed into “China’s 20th Century Architectural Heritage Project”.

When viewed from above, Shanghai Exhibition Center looks like a flying plane. There are many multi-function exhibition halls, conference rooms, theaters, banquet halls and cafes. An circular road connects six large squares, the tranquil verdant garden, the majestic large-scale music fountain with lights, and seven characteristic buildings. Inside the building, light floods in from the north through to the south. The wide space and brightly-lit environment creates a convenient, comfortable, and relaxing atmosphere for its guests.

As a multi-function conference center, the central hall of Shanghai Exhibition Center can accommodate more than 2,000 people for conferences and more than 1,000 people for banquets.  The banquet halls and theaters are well-equipped. The Shanghai Exhibition Center has hosted various types of domestic and international exhibitions, fairs, expos. It has taken the initiative to hold several cultural and scientific activities. The 27th South Pole Science and Technology Conference, the 14th National South Pole Bureau Director’s Council Meeting, the second meeting of the 6th Round of the Shanghai Lawyers’ Congress, and the Conference of New Textile Product Launches from Korea, have all been held at the Shanghai Exhibition Center. 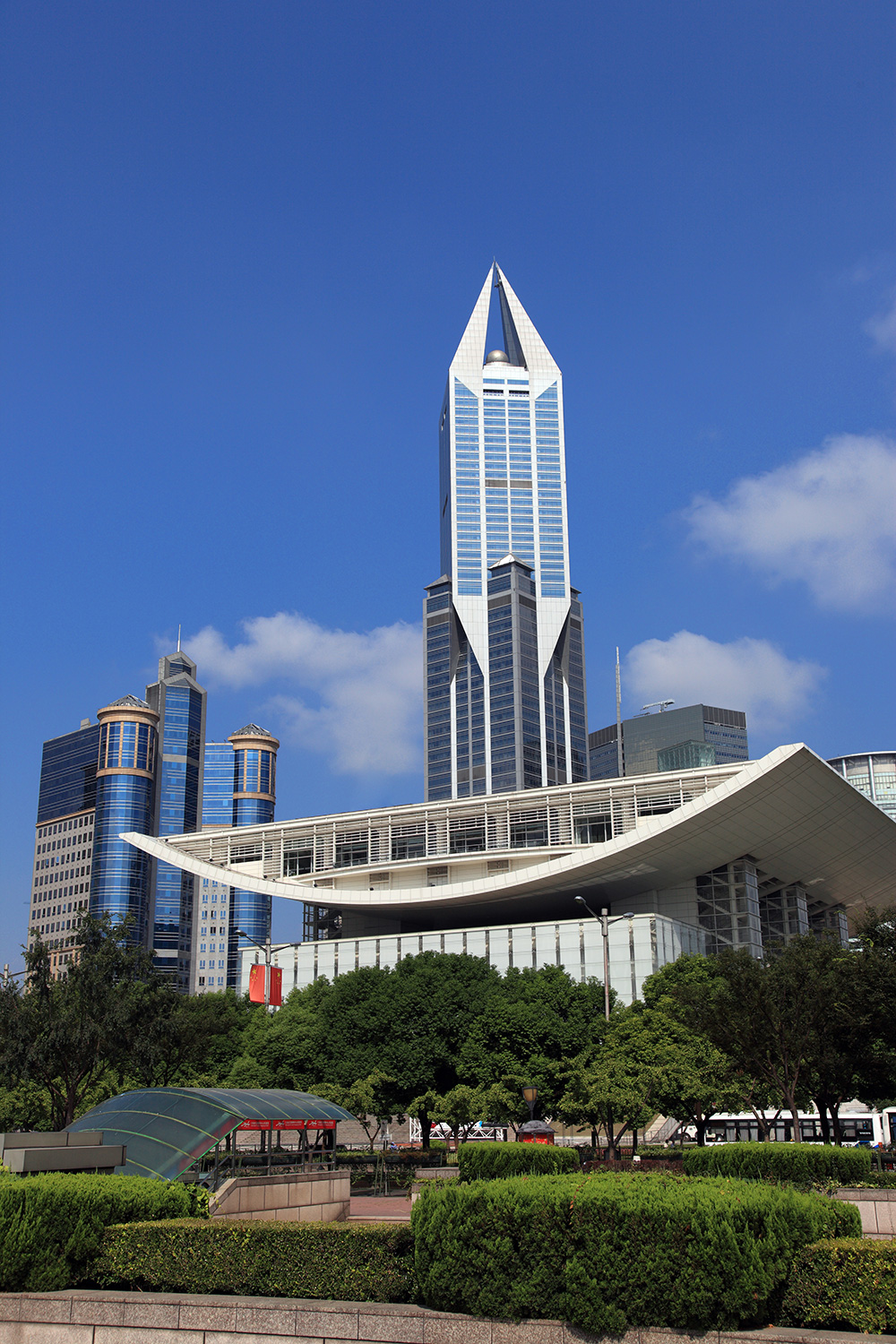 Located in Shanghai’s People’s Square, the Shanghai Grand Theater was designed by French architect, Jean-Marie Charpentier. The Grand Theater is divided into three theaters of varying sizes: The Auditorium, The Buick Theater, and The Studio Theater. The Grand Theater looks like palace made from crystal. The roof is a white arc with both ends raised up like it is embracing the sky. This design was inspired by classical Chinese philosophical thought. On 6th January 2020, the Shanghai Grand Theater was selected as one of the top,new landmark buildings in Shanghai, which was an immensely important moment.

Since its founding, it has always made it its motto to present “first-class art, first-class artistic experience, and first-class education”. It has also adhered being “international, classical, artistic, and original as it provides a platform for famous masters, groups, and masterpieces. Moreover, it also aims to “the leader of Chinese theaters, the cultural business card of the city, and the center of cultural creativity”.

The international significance of the Shanghai Grand Theater cannot be ignored. Since its official opening on 27th August 1998, it has attracted numerous world-class performing groups and numerous artists from China and abroad. The tenors Pavarotti, Domingo and Carreras have performed here together. It was the only time that has happened nationally. There have also been performances of the four major European opera genres, the Vienna Philharmonic Orchestra, the Berlin Philharmonic Orchestra, the Royal Opera House of the UK, Paris National Opera, The Bolshoi Theater and plenty of other Chinese and international first-class troupes have come to perform at Shanghai Grand Theater and offer the audience an extraordinarily charming piece of art. 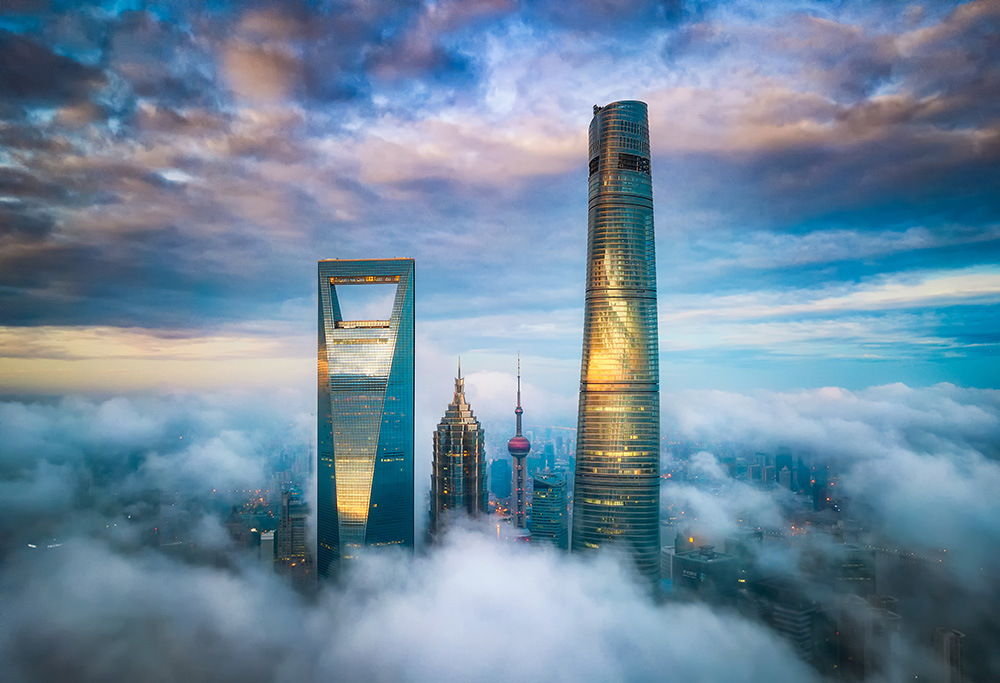 Shanghai World Financial Center, located at 100 Century Avenue, Pudong New District, Shanghai, is a skyscraper in which towers above the Lujiazui Financial District. It faces Pudong New Area in the east, Puxi District and the Huangpu river in the west, Zhangyang Road Commercial and Trade Zone in the south, and Lujiazui Central Green Area in the north. The building was titled as “The Best High-Rise Building of the Year” in 2008 by the World High-Rise and Urban Habitat Council

Shanghai World Financial Center functions as both a financial center and an information center. These two aspects provide the greatest thrust for the development of today’s society. They create new sparks together. Like a powerful magnet, the center attracts outstanding professionals from all over the world to gather here for creation and innovation. It is a magnetic platform that connects the finance industry with the information industry, Chinese culture with Western culture, economy with civilization, knowledge with technology.

The ground floor of the building consists of different shopping malls and restaurants. From the 7th floor to the 77th floor, it is the office area for various enterprises. The public space is in line with the high standard configuration of the International Financial Center, with both functionality and comfort being considered. The 29th floor is the Shanghai Global Financial and Cultural Communication Center, which is not only a platform for gathering and disseminating financial and cultural information, but also an ideal place for people from all different backgrounds such as the culture industry, media industry and economic industry to exchange ideas with others. Starting from the 79th floor is Shanghai’s Hyatt hotel, one of the most famous brands of hotel, known for its high-quality service, and high-end facilities. The observation deck, on the 100th floor of the building, is the top floor and features a suspended sightseeing corridor made from glass and mirrors.  It offers unparalleled views of the city.