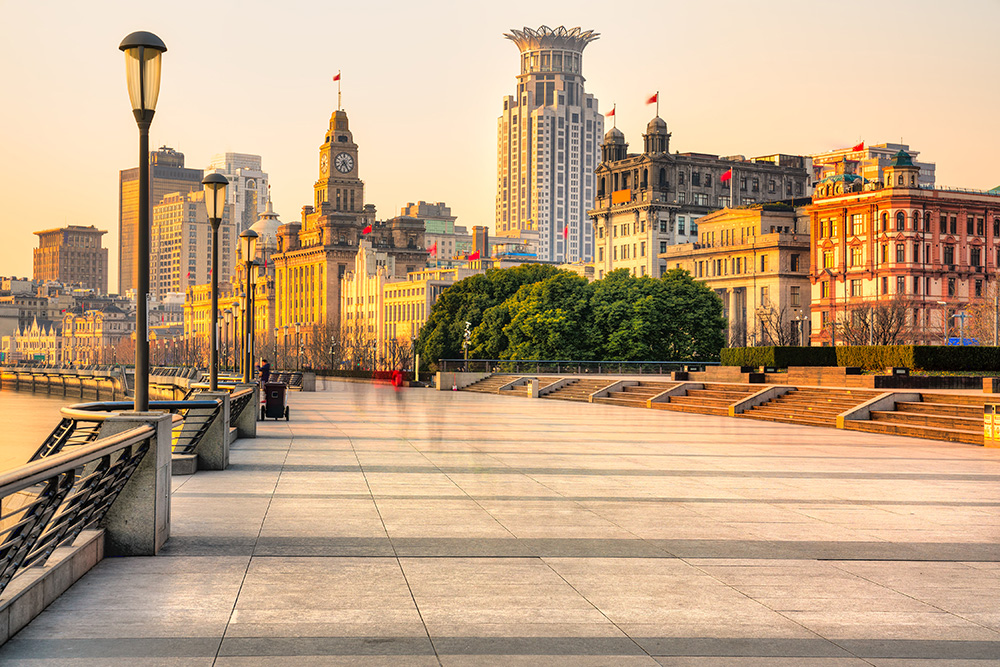 The Bund, one of the most iconic and scenic spots of Shanghai, is located in the center of Shanghai’s Huangpu district. It was once the concession area of Shanghai from 1844 to 1943, and can be described as birthplace of modern Shanghai. The Bund is bound by the Huangpu river to the east, the financial and foreign trade center of Shanghai to the west, the Waibaidu Bridge over Suzhou Creek to the north and Yan’an East Road to the south.

After Shanghai became an economic metropolis, numerous international banks, companies, media organizations and so on were set up. Distinctive pieces of architecture have gradually appeared in the international metropolis of Shanghai and the Bund has become an international financial center. Strolling along the riverside, visitors will not only have the opportunity to admire the towering skyscrapers but, in particular, see iconic buildings such as the Oriental Pearl Tower, the Shanghai Jinmao Tower, and the Shanghai World Financial Center.

The Bund also has various scenic spots for tourists to visit and enjoy, including Huangpu Park, Baidu Bridge, the shops in Chen Yi Square, and the Bund Sightseeing Tunnel.

At night, tourists can take a cruise along the Huangpu river, Shanghai’s mother river, or walk hand in hand with their loved ones along its banks. Illuminated by the neon lights on either side of the river, you will find high-rise buildings juxtaposed against traditional architecture in this “city that never sleeps” and which remains perpetually full of romance and charm! 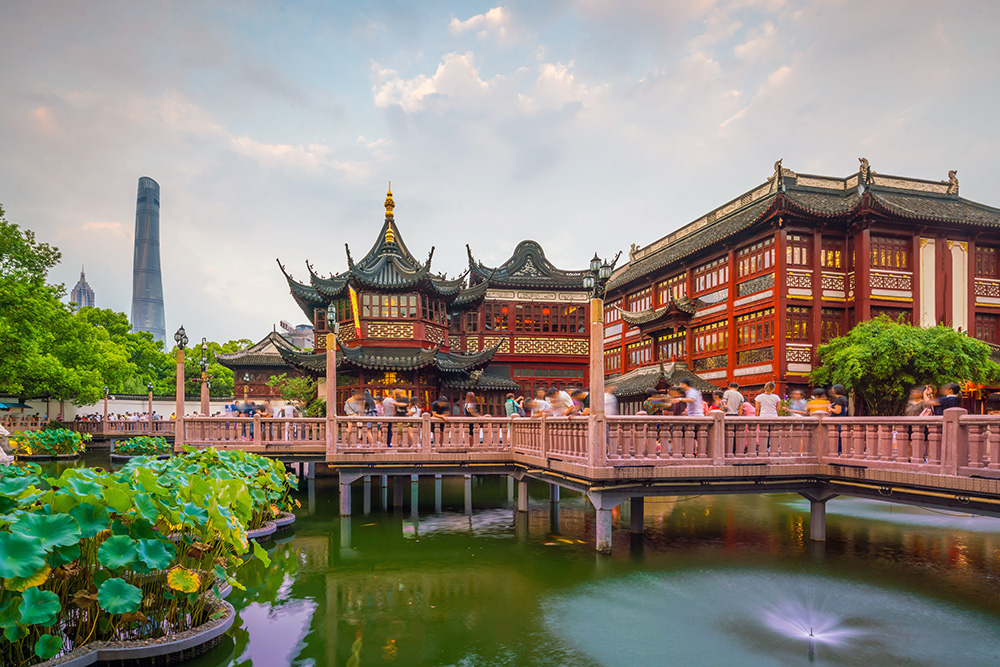 Yuyuan Garden was built in the Ming Dynasty. It is a typical Jiangnan-style garden located south of the Yangtze River, with Fuyou Road to its north and Anren Street to its east. Its history stretches back 450 years. The beautiful scenery and exquisite design of the park attract a huge number of local and foreign tourists. Together with Chenhuang Temple and Shanghai Yuyuan Tourist Mart, Yuyuan Garden is a part of Shanghai’s Yuyuan Tourism Business District.

There are many exquisite examples of Chinese architecture inside Yuyuan Garden, which is dotted with picturesque rockeries, flowers, plants, and trees. Peace and elegance can be found in every corner of this small but exquisite park. Take a look at the Sui Hall, the iron lions, the Dianchun Hall, the Yangshan hall, and the many other buildings. The forty plus buildings are all designed according to the traditional Jiangnan style of garden architecture. Entering from the main entrance into the garden, you will find yourself in the Sansui Hall, where visitors can watch the koi weave through the water. Yuyuan Garden reflects the typical architectural features of Jiangnan gardens popular in the Ming and Qing dynasties.

The “Book Collection Tower”, the birthplace of the famous “Shanghai Painting and Calligraphy”, is in Yuyuan Garden, as is the Dianchun Hall which served as the headquarters of the Small Sword Society. Both these historical sites are well worth a visit. The “Book Collection Tower”, also known as the “Green Poplar Spring Tree” or the “Painting and Calligraphy Building”, is a golden house where many painters gathered to hone their painting and calligraphy skills and engage in discussions. Having walked to the five-bay Dianchun Hall, you can enjoy the unique craftsmanship of the beams and columns, and admire the fans which are filled with carvings of opera characters.

In the past dynasties, people have unwaveringly praised Yuyuan Garden and called it “the exquisite, wondrous beauty of the southeast”, as it is one of the most famous gardens in the southeast. Today, Yuyuan Garden is a popular place for all kinds of festivities, such as the Lantern Festival and the Double Ninth Festival. Painting and calligraphy exhibitions are also held here, adding to the elegance and tranquility of the garden. 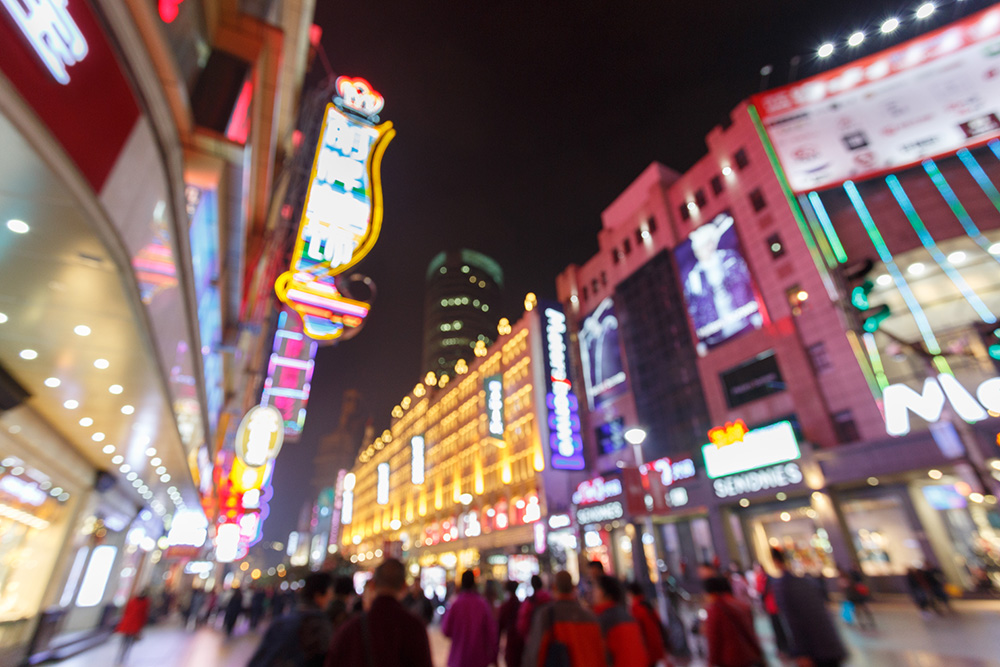 Nanjing Road (Pedestrian Street), founded in 1999, is located in the Huangpu District of Shanghai. It was the first commercial street built after the opening of the treaty port in Shanghai. A 4.2-meter-wide “golden belt” runs through the pedestrian street to lead shoppers and tourists along the way. It has many public facilities, such as benches, information kiosks, wastebins, shopping booths, sculptures, and colorful billboards. The thirty-four flower beds of varying shapes also add beauty to the street. An endless stream of visitors come here all year long.

Nanjing Road brings together many department stores, filled with a dazzling array of goods, creating a true shopping paradise. One obvious highlight is the Wing On Department Store, with its eclectic architectural style. Designed for the first time by the Chinese, it combines several western Renaissance styles. There is also the bold design of the Sincere Department Store building with its arcade-style verandahs. The juxtaposed isosceles and right-angled triangles of Shanghai Shimao Festival City is also another distinctive piece of architecture. Within, there are thousands of brands. So those who want to shop can shop for the latest trends of their favorite brands, and simply enjoying the pleasure of shopping.

On the “Golden Belt” of the Nanjing Road, there are three groups of life-size sculptures. Namely, they are the “Family of Three” on Henan Middle Road, the “Young Woman” on Zhejiang Middle Road, and the “Mother and Daughter” on Xizang Middle Road. Along the pedestrian street, there are benches for visitors to take a rest. They are not only practical in function but also artistic and avant-garde in shape. Even the thirty-seven manhole covers dotted along the street have unique designs.

Leisurely moving along the streets, the dangdang pass by. They look like the small old trams of yesteryear, and immediately reignite the charm of old Shanghai. In an instant, they make people feel they have stepped back in time. Don’t forget to give them a ride. The experience is well worth it. 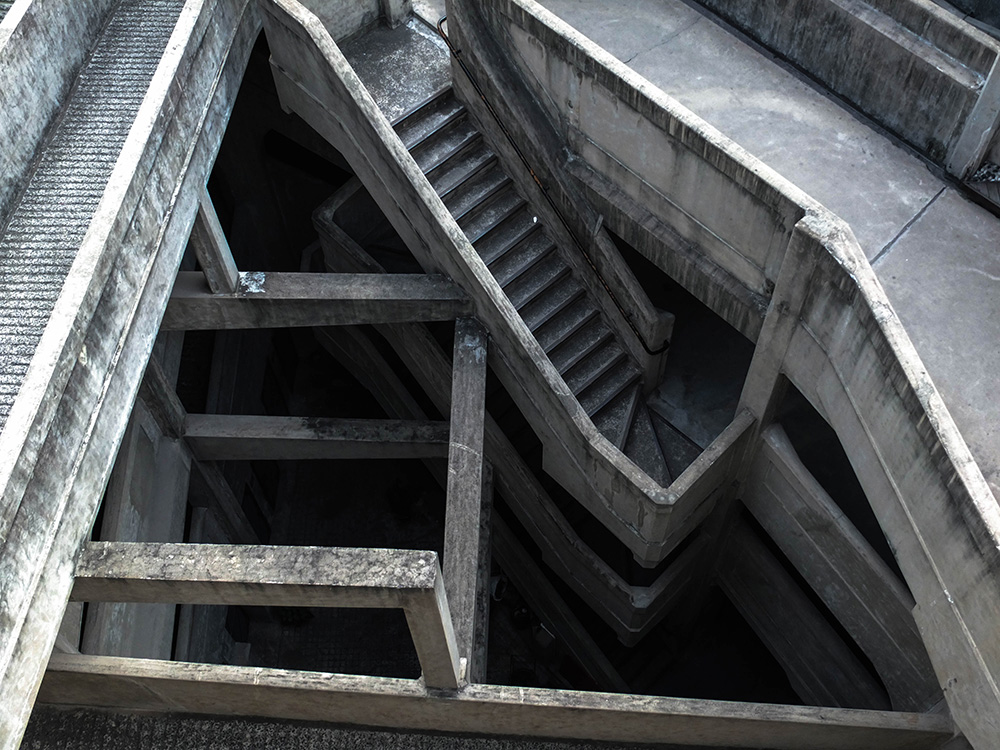 1933 Old Millfun is located on Shajing Road, Hongkou District, Shanghai. It is used to be the Shanghai Municipal Council Slaughterhouse and was built by the famous British architect Andrew Balfour. Nowadays, it is the perfect place for many artists and creators to hold activities. Inside the old slaughterhouse, the peculiar umbrella-shaped columns, the climbing corridors, and the cleverly designed interior space create a unique and mysterious atmosphere.

The design concept of 1933 Old Millfun provides an exemplary integration of Chinese and Western elements. The whole building’s design structure, which is square on the outside and but round on the inside, cleverly conveys the ancient Chinese conception of the world and the heavens: a square earth covered by a hemispherical dome. The interior is connected by intertwining corridors and bridges which extend in all directions, looking like a maze of heaven and earth. The slaughterhouse’s ingenious design, exceptional style, and admirable spatial structure has attracted many famous brands to host commercial activities such as anniversaries and new product launches here. Brands including Ferrari, Rado, Coca Cola, Mercedes-Benz, and Porsche, have hosted events here. When new products are released, the avant-garde design and unparalleled style of 1933 Old Millfun, provides a befittingly novel atmosphere. The various commemorative activities carried out also overlap with the historical charm of old Shanghai, encouraging people to ponder on the passage of time.

1933 Old Millfun retains its original structure and presents itself to the world as a creative center fit for the new era. The combination of fashion, creativity, and design, has transformed this building into a landmark for the fashion and art circles in Shanghai. 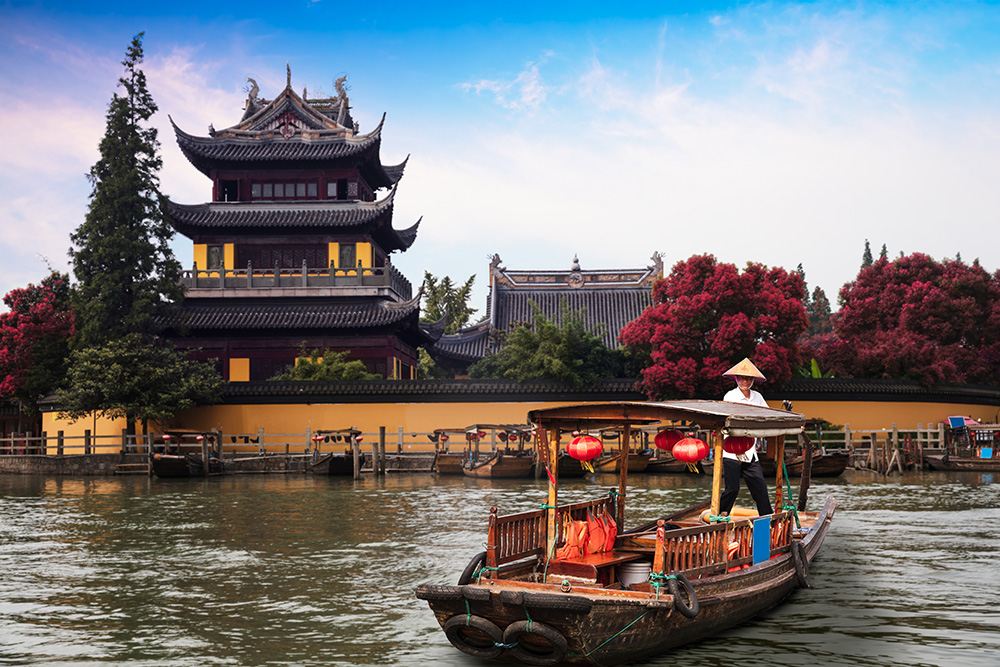 Zhujiajiao Ancient Town is located a few kilometers east of Dianshan Lake in the west of Shanghai. It is a typical Jiangnan-style town south of the Yangtze River. Zhujiajiao is rich in tourism and leisure activities. All kinds of entertainment facilities can be found here, including water sports areas, youth activity camps, golf clubs and many more.

In addition to these modern recreational facilities, the most remarkable thing about Zhujiajiao is its natural and cultural landscapes, as well as its historical sites. The whole ancient town is composed of nine old streets, upon which a thousand houses are situated. The small bridges and the flowing rivers complement each other perfectly. The most famous street is Bei Dajie (North Street), the best-preserved street in Shanghai belonging to the Ming and Qing dynasties. Starting from Fangsheng Bridge in the northeast and extending to Meizhou Road in the southwest, it extends for over 300 meters and attracts countless tourists every year. They come here to enjoy the typical Jiangnan-style scenery along the street. In addition to the famous garden and temple, Kezhi Garden and Chenghuang Temple, in the ancient town, there are also many scenic spots full of folk customs, such as Dianshan Lake, Dianshan Mountain (a key mountain of the “Nine Peaks”), Zhuxi Garden, and Guan Wang Temple (Baoguo Temple).

Religious activities in Zhujiajiao can be traced back to 1127 when Puguang Temple was built on the top of Dianshan Mountain. It was the earliest temple built in the Zhujiajiao area. Today, many other styles of temples have sprung up. Their number exceeds twenty. Baoguo Temple and Cimen Temple are both typical Buddhist temples. Taoists, Catholics, Christians, and Muslims have also built religious venues in Zhujiajiao, leaving their marks. Having entered Zhujiajiao, boredom will cease to exist as you explore this beautiful city which is beyond words.