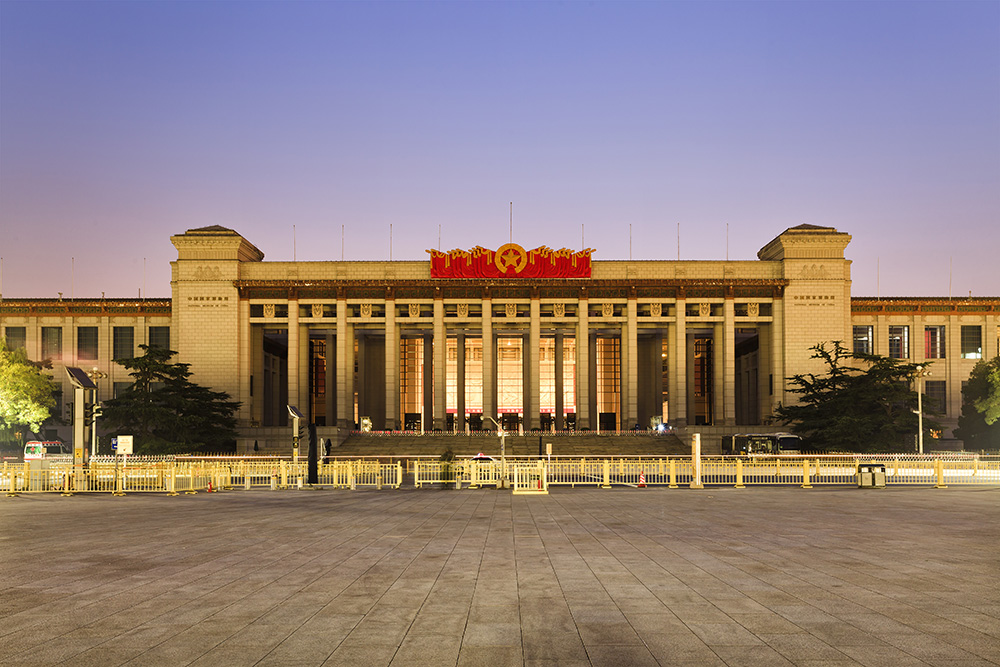 The National Museum of China is located east of Tiananmen Square in central Beijing, and perfectly fuses historical and artistic elements. As a comprehensive museum, it takes on the responsibilities of collecting and preserving  cultural relics, conducting archaeological research, and providing public education and cultural exchanges with foreign countries. It can be described as the greatest palace of Chinese history, culture, and art, and provides one of the most important windows into Chinese art and culture.

The museum has five floors. On the basement floor, there is an exhibition entitled ‘Ancient China’. On the north side of the museum, the focus is on the ancient past, while the south side, is about the late Qing Dynasty. It brings together 2,520 exhibits, including classic cultural relics as found in historical texts, such as the pottery bowl decorated with a fish and a human mask, the Hongshan culture jade dragon (sometimes described as ‘China’s first dragon’), and the Longshan black pottery cups as thin as eggshells. In addition, the public can make use of the academic lecture halls, theaters, and studios.

The fourth floor houses a further eight galleries which offer thematic and temporary exhibitions. The special exhibitions include ‘Ancient Chinese Bronze Art’, ‘Ancient Chinese Buddha Statue Art’, ‘Ancient Chinese Porcelain Art’, and ‘Exquisite African Sculpture Art’. The exhibitions allow visitors to explore the deeper meanings of the artefacts by considering their evolution over time. At the same time, various temporary exhibitions cover topics such as history and culture, fine art, and archaeological discoveries. In particular, the special exhibition, ‘The 40th Anniversary of the Reformation and Opening Up of China’ comprehensively portrays the great changes of China over the past 40 years by using historical pictures, text and video, replicas, models, and interactive media.

Visitors with certain credentials can visit the exhibitions for free. Please be aware that you must pass a security check before you can enter the museum. The number of visitors per day is limited, but an online reservation can be made. Visits within 7 days can be reserved before 4 p.m. on the day. Group reservations and on-site reservations are not accepted. 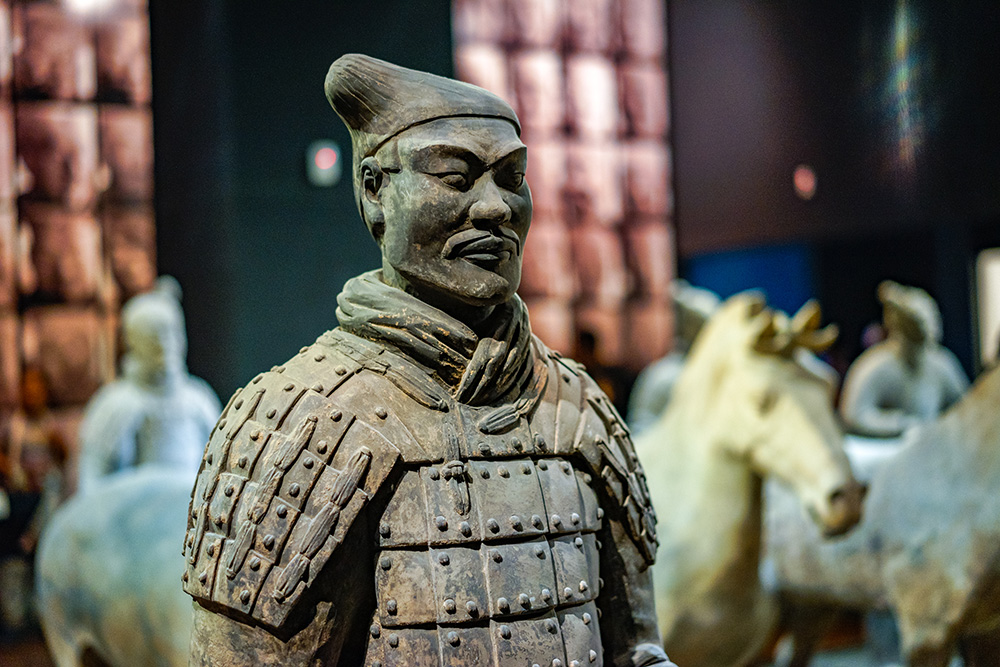 Capital Museum, also referred to as ‘Shou Bo’, is located in Xicheng District, Beijing. It has become a large, modern, and comprehensive museum in Beijing with its magnificent buildings, intriguing and diverse exhibitions, advanced technical facilities, and a full and thoughtful array of functional services.

Capital Museum has one floor below ground and six floors above ground. The basement floor contains a multifunctional conference hall with the most advanced facilities in China such as multilingual simultaneous interpretation, digital film broadcasting, a conference voting system, and a dedicated conference hall website. There are also three temporary exhibition halls that provide first-class exhibition platforms for cultural and artistic exchanges between China and foreign countries. There are doors leading to the outdoor Bamboo Courtyard as well as a pottery workshop offered to visitors.

On the fifth floor, there is the exhibition of ‘Stories of the Capital City: Old Beijing’s Folk Customs’ and ‘Selected Works of Ancient Jade Art’. The ‘Selected Works of Jade Art’ exhibition displays a lot of significant exhibits. There are, for example, jade objects unearthed from the tombs of China’s royal families and aristocrats. There are also pieces of jadeware engraved with poems written by emperors as well as other dated items in years of extraordinary significance.

The ‘Selected Works of Ancient Stationery and Other Study Utensils’ exhibition can be found on the sixth floor. It exhibits cultural relics which possess a long history and have artistic characteristics of Beijing.  Pagoda relics, in particular, reflect the long history and culture of Buddhism within the ancient capital. The items demonstrate the unique Buddhist culture of Beijing, and reflect the great level of craftsmanship in those times.

Visitors with certain credentials can visit the exhibitions for free. Please be aware that you must pass a security check before you can enter the museum. 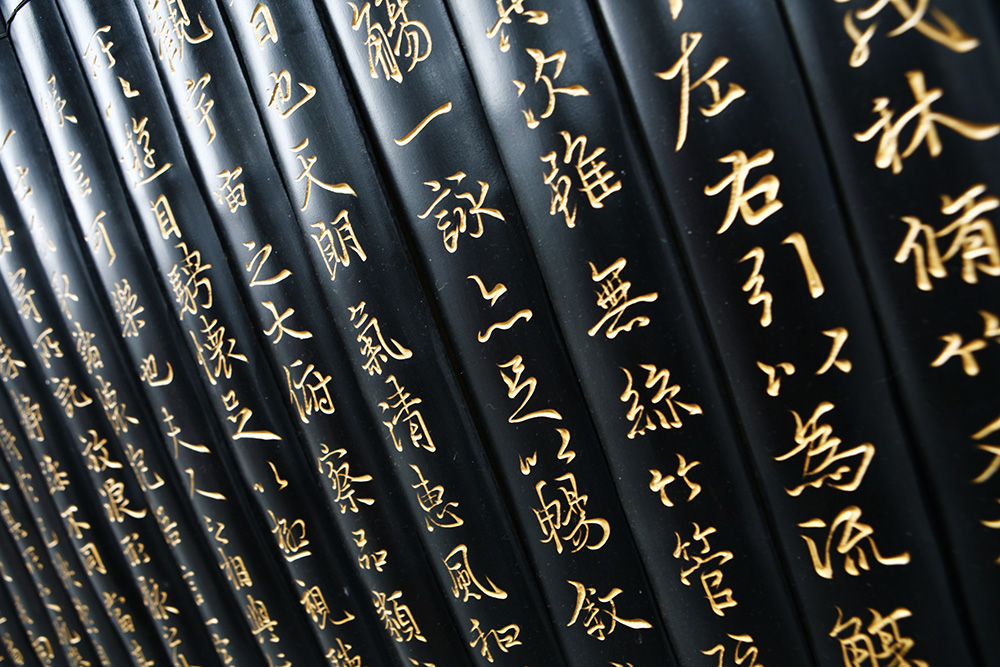 The National Museum of Classic Books has a massive collection. In terms of time span, the museum’s collection covers more than 3,000 years of history, all the way from the ancient times to the modern times. In terms of cultural relics, there is a great variety of items from the past dynasties of China as well as abroad. Oracle bones, stone rubbings, Dunhuang Posthumous Writings, ancient maps, ancient books in foreign languages, as well as rare Western books, can all be found in the Museum. Relying on the rich collection of the National Library, the museum has set up a number of exhibitions in its ten galleries. Four galleries are on the second floor, one on the third floor, and five on the fourth floor.

National Museum of Classic Books has great diversity in its displays. From multiple angles and aspects, the Museum reflects the profound classical culture of the Chinese nation as well as the amazing achievements in terms of philosophy and culture. The endless and continuous evolution of various classic books reflects China’s long history and culture, as well as the changes within the country. The National Museum of Classic Books preserves the carriers of the splendid history of China, and has made outstanding contributions to the promotion of traditional culture, the construction of social culture in the new era, and the enriching, spiritually, culturally, and emotionally, of all.

Visitors with certain credentials can visit the free exhibitions. Please be aware that you must pass a security check before you can enter the museum. 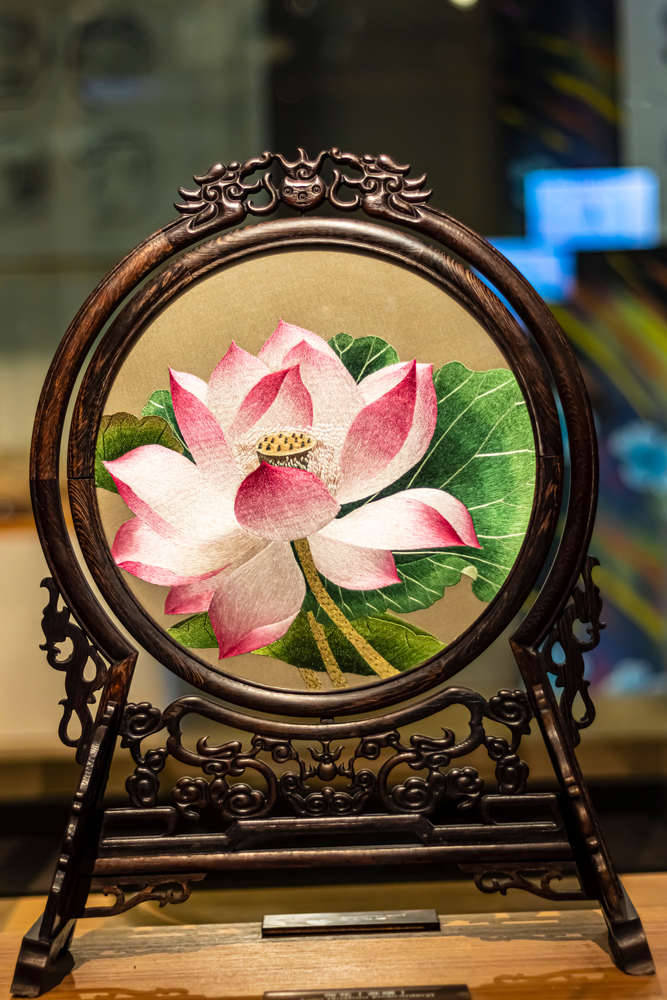 The Beijing Art Museum is located in the ancient architectural complex of the Wanshou Temple, a temple built between the Ming and Qing dynasties in Beijing. It focuses on displaying the achievements of ancient Chinese art and culture, and depicting the development of modern art. The museum has an amazing collection of cultural relics, with a total of nearly 50,000 pieces of various categories. The cultural relics span a wide range of time, from the works of primitive human beings to the works of masters from the Ming and Qing dynasties. The collection is also rich in variety, including stone, jade, painting, calligraphy, and more.

“The History of Wanshou Temple Exhibition” reveals the construction, prosperity, decline and revival of the temple in different historical periods. Visitors will feel the solemnity and quiet of the exhibition as they walk in.

“Artifact Exhibition of the Ming and Qing Dynasties” contains 102 pieces from extremely valuable collections. It is composed of four exhibitions with distinctive features. In the form of thematic exhibitions, visitors will gain a deeper understanding of the creation processes of jade carving, and metal, bamboo, wood and lacquer ware in the Ming and Qing dynasties. By gaining an understanding of the process they will be able to better appreciate the enduring artistic charm of those collections.

“Buddha Statues Exhibition of the Ming and Qing Dynasties” is a collection of more than 80 Buddhist relics from the Ming and Qing dynasties. Visitors will instinctively feel the artistic value contained in the delicate shape and lifelike expression of the Buddha. Visitors can also appreciate the harmonious beauty between Buddhist culture and Chinese culture.

Prince Gong’s Mansion is located on Liuyin Street in the West of Beijing. It consists of a large complex mansion and gardens. Originally constructed for Heshen, an official highly favored by the Qianlong Emperor, it was later renamed after Prince Gong, a Manchu prince and influential statesman of the late Qing dynasty. The mansion has witnessed the historical process from prosperity to decline of the Qing dynasty.

The scale of Prince Gong’s Mansion is grand, and basically consists of two parts which are the mansion and the garden. It is further divided by 3 roads -middle, west and east. The three roads are located equally along the central line running through the north and south, and each area also has multiple courtyards.

“Yin An Palace” and “Jia Le Hall” are the main buildings of Prince Gong’s Mansion. “Yin An Palace” serves as the central building. It only opens during festivals, grand ceremonies and other special events. The green glazed tiles on the roof show the majesty of the “middle road” reflecting the nobility of the prince.

There is a rare two-hundred-year-old vine in the front yard of the hall of the East Road. Prince Gong’s daily residence was located on the East Road building in a courtyard, named “Ledao Hall”.

The courtyard of the West Road is beautiful. In the center of the courtyard, there is the “Bao Guang room” and “Tin Jin Zhai”. The famous Nanmu partition, hidden in the “Tin Jin Zhai”, was built in imitation of “Ningshou palace” in the Forbidden City. When Heshen fell out of favor, this imitation of royalty was also listed as one of the “Twenty Great Sins” of Heshen.