The Palace Museum and the Forbidden City

The Palace Museum in Beijing, also known as the “Forbidden City,” is a royal palace with a long history of 600 years. It stood throughout the Ming and Qing dynasties. Its significance is in its centralization of imperial power. The Palace Museum is a complex of traditional wooden structures typical of classical China. The scale and integrity of preservation is rare in the world. Among the existing palatial buildings in the world today, the Palace Museum is second to none.

The Palace Museum was built in 1420 and housed a total of 24 emperors from the Ming and Qing dynasties. It was officially established as the Palace Museum in 1925. The Palace Museum is a complex and symmetrical structure with four gates. Each side of the city wall has a uniquely shaped turret, and a 52-meter-wide moat encircles it.

The Imperial Palace has a distinct structure and is generally divided into two parts. There is firstly the outer court with the “Three Great Halls”: the Hall of Supreme Harmony, the Hall of Central Harmony, and the Hall of Preserving Harmony. The Hall of Literary Glory and the Hall of Military Eminence are located on either side of the Gate of Supreme Harmony. In is in these areas that large ceremonies were held. Temple buildings such as the Xuanqiong Baodian are situated to the east of the Sixth East Palace, while the Hall of Rectitude and other temple buildings are located to the west of the Sixth West Palace. These palaces are all Buddhist halls. Pavilions that were once part of the original palace have been transformed into specialized exhibition halls. Once can find the painting and calligraphy hall, ceramics hall, sculpture hall, clockwork and watches hall, and opera hall. The vast exhibition halls also display the art of the Ming and Qing dynasties. There are also specific halls which feature comprehensive exhibitions regarding dynastic ceremonies and music, as well as the weddings of Qing emperors. On display are art treasures such as “Along the River During the Qingming Festival” and a large number of ancient handicrafts. Every visitor is sure to find valuable collections here that will open their eyes and help them feel the profound history and unique charm of classical Chinese culture. 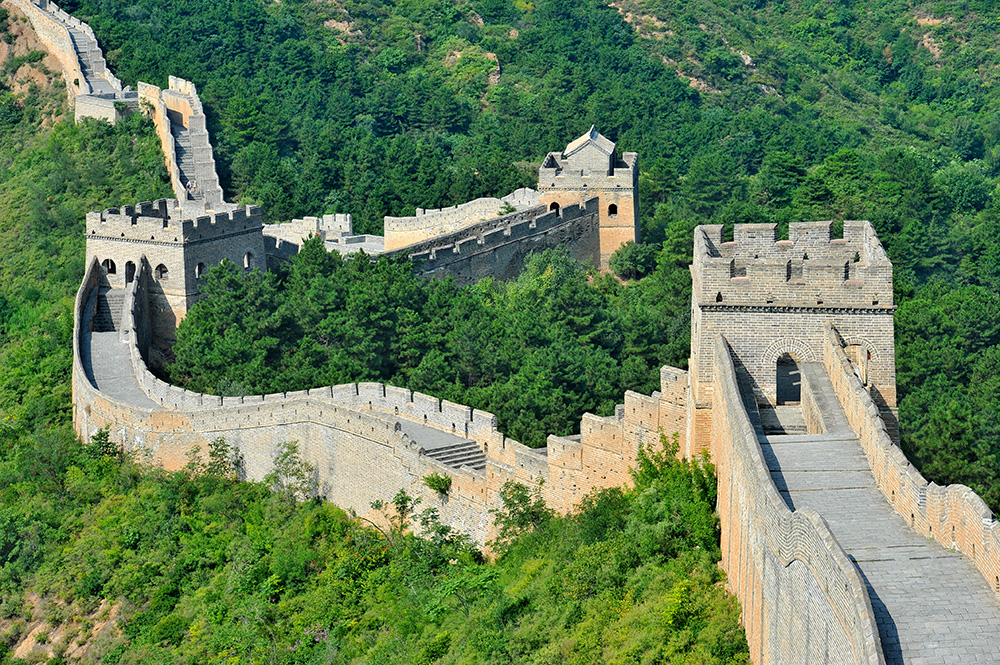 The Great Wall, stretching east to west for thousands of miles, is an outstanding example of the military defense system of ancient China. The Badaling section is a key part of the Great Wall. Located on Yundu Mountain, it is in the Yanqing district of Beijing. Badaling Great Wall is the essence of the Ming dynasty portion of the Great Wall. As one of the passes of the Juyong Pass, there is an old saying which goes, “The key defense of the Juyong Pass does not lie in the pass itself, but in Badaling Great Wall”. It is a must-see site in the Chinese capital. Hundreds of world-renowned personalities from both inside and outside China, including Richard Nixon and Margaret Thatcher, have visited the Great Wall.

Badaling’s terrain is challenging. You will find that there an inscription on the gate of “Juyong Outer Town.” Historical records show that this plaque was carved in 1539, and the east and west gates were both built of brick and stone. Badaling Great Wall is undoubtedly an essential defense of the capital with its mountain peaks and steep terrain. The Great Wall stretches north and south, jutting into the mountains beyond the eye’s reach and winding away into the distance. The Great Wall follows the undulations of the mountains and the meander of the rivers, even as it stands on the cliffs as a military fortress.

As the saying goes, “The danger of Juyong lies not in the pass, but in Badaling.” As a “National Civilized Scenic Tourist Area”, Badaling Scenic Area not only attracts countless domestic tourists, but also many foreign visitors. There is a saying that “you are not a real man unless you climb the Great Wall.” Visitors will not only enjoy the accomplishment of climbing to the top but also savor the stunning scenery along the way. Museums, a dome theater, ancient cliff dwellings, and remnants of the Great Wall are to be found here as well.

The Temple of Heaven was used by emperors as an altar in the Ming and Qing dynasties to “worship heaven”, “pray for rain”, and “pray for a good harvest”. It is located on the east side of Zhengyang Gate. Construction began in 1420, and it was expanded and renovated by various emperors. The Temple of Heaven witnessed the rise and fall of the Ming and Qing dynasties and brought together the essence of the two dynasties’ architectural techniques. It is one of the rare treasures of classical Chinese architecture.

The Temple of Heaven is also the largest existing building complex used for the worshipping of heaven in the world. The ancient Chinese worshipped the heavens and the earth. Circular mounds were built to worship the heavens and square mounds to honor the earth. Emperor Jiajing of the Ming dynasty built a circular mound to worship the heavens and later renamed it the “Temple of Heaven”. There are two altar walls in the Temple of Heaven. To reflect the ancient belief that there was “a square earth covered by a hemispherical dome”, these two altar walls are specially designed to be round in the north and square in the south. The Temple of Heaven, bounded by these two altar walls, is divided into an inner altar and an outer altar. The inner altar is divided into northern and southern parts by the wall. Some important buildings are aligned along the north-south axis, created by the central axis of the inner altar. The ancient custom of prayer and worship during winter and spring was carried out here. Located to the north of the altar wall is a “Good Harvests Altar”, in which prayers for a good harvest were carried out in spring. The worship of the winter solstice was conducted at the “Circular Mound Altar” which is located south of the altar wall. The path connecting the “Good Harvest Altar” and the “Circular Mound Altar” follows the Temple of Heaven’s central axis which has a length of 1,200 meters. The path is named Danbi Bridge, and is 360 meters from north to south and 30 meters wide. It is cleverly designed, high in the north and low in the south. Pedestrians walking along this road will feel like they are walking towards the sky.

Looking south from within the west gate, you can find the “Fasting Palace”, where former emperors fasted. Also, to the west of the outer altar, one can also visit the places where the music and dance of sacrificial offerings were taught and performed. Entering the Temple of Heaven Park, you will not only see the Hall of Prayer for Good Harvests, the Hall of the Emperor, the Circular Mound Altar, and the Imperial Vault of Heaven, but also feel the strong attachment and belief ancient Chinese people had regarding the unity of heaven and man.

The Summer Palace was destroyed and damaged several times, but also went through periods of rebuilding and repairing. The beautiful ridges of peaks in the west cast a wondrous outline upon the lake. The elements of the landscape interweave with one another, and the scenery is changing and colorful, making it a true delight to visit. The Summer Palace can be roughly divided into three parts. The first part is the administrative area. This part of the site is where the Empress Dowager Cixi and Emperor Guangxu conducted activities, including the handling of government affairs and the receiving of foreign guests. The center of this was the Hall of Benevolence and Longevity. The second section is the living area, where the Empress Dowager and the concubines lived. The main buildings are courtyards such as the Hall of Jade Billows, Yiyun Hall, and the Hall of Joy and Longevity. The many pavilions are cleverly integrated with the surrounding scenery. Finally, there is the scenic area, which was designed for sightseeing and refreshment from the summer heat. The dominating Longevity Hill and the quiet Kunming Lake cannot fail to instill a sense of peace and serenity, as you walk around. On the top of Longevity Hill, you can see the Sea of Wisdom, the Tower of Buddhist Incense, Dehui Hall, the Hall of Dispelling Clouds, the Gate of Dispelling Clouds, and the Yuyu Square of Clouds. All these areas are arranged along a central axis extending as far as the eyes can see. Back at the foot of Longevity Hill, there is a corridor which stretches some 700 meters, which is the largest, longest, and most famous corridor in classical Chinese architecture. It is called “the world’s first corridor” and contains more than 8,000 colorful, meticulous, paintings along its beams. A fascinating array of characters and scenery are on it.

The Summer Palace is a treasure of classical Chinese traditional garden art. It has the grand style of a royal court and the beauty of a natural landscape. It perfectly integrates humanity and nature, creating a perfect harmony.

The Old Summer Palace, also known as the Three Yuanming Gardens, is located in Haidian District, Beijing, near the Summer Palace. It is a large imperial garden composed of the Garden of Perfect Brightness, the Garden of Eternal Spring, and the Garden of Elegant Spring. It was built by five emperors of the Qing dynasty and had a history of more than 150 years. In 1860, British and French troops occupied the Old Summer Palace, looted millions of cultural relics, and set fire to paintings and writings. Emperor Tongzhi wanted to restore the palace, but he was forced to stop because of limited financial resources. Later, the palace was repeatedly plundered by bandits, resulting in this former glorious palace falling into ruins.

The Old Summer Palace remains an eternal sore for the Chinese nation, but also stands as “the model of all garden landscaping”. After nearly two centuries of construction and management, it become a grand and magnificent summer palace, featuring exquisite construction skills, rich cultural heritage, and full of national symbolism. It won praise from the whole world. Its destruction is not only a sorrow for Chinese people but also a pity for the whole world. Although the wounds remain obvious, the invasion and the barbaric acts of the intruders, will eventually settle with the passing of time.