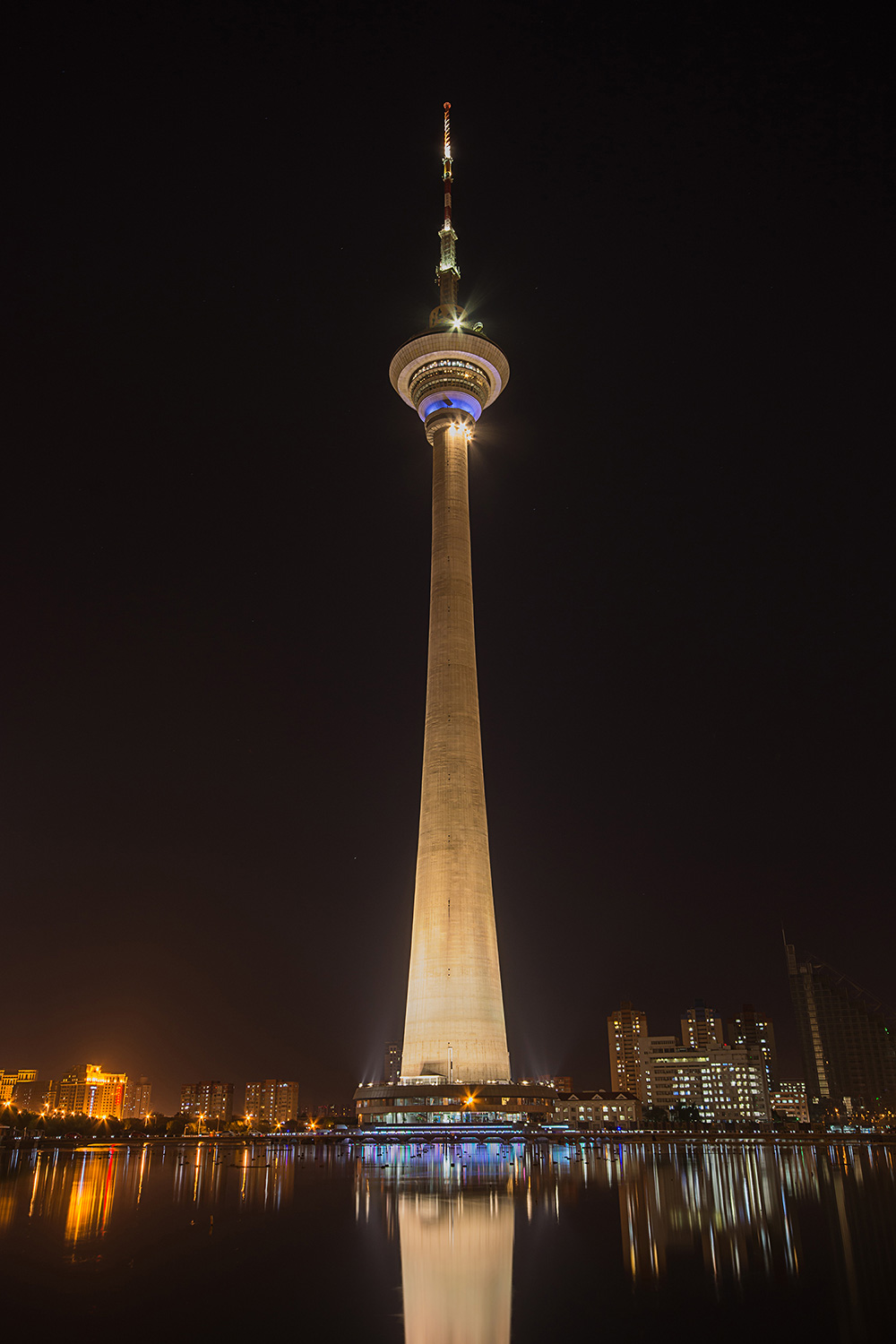 Tianjin Radio and Television Tower or Sky Tower for short, stands at the confluence of south Tianjin NieGong bridge of the Hexi district, Zijin Mountain Road and south Wei Jin Lu. The tower stands at the height of 415.2 meters, with a area is 220,000 square meters with a constructed area of 26,496 meters (the tower’s body is 12,945 square meters, and 13,551 square meters at its base). The tower weighs 100,000 tons, and integrates radio and television transmission, tourism, sightseeing, leisure, entertainment, and catering. It is a high-rise tower made of reinforced concrete.

Sky Tower is designed based on the concept of “Sky”. As such, it was made in the shape of a flying saucer symbolizing “visitors from beyond the sky”. This better harmonizes the representation of “Sky” with the modern industrial city of Tianjin. After the completion of the tower, the land around it was made into a lake with a water surface of 173,000 square meters and named the Sky Tower Lake. The tower stands in the water which reflects the tower and forms a unique scene.

Inside the tower, there are four high-speed elevators, which rise five meters per second. Tourists can arrive in the viewing hall in only 55 seconds. There are two floors open to the public: one is the viewing deck 253 meters above ground. When the weather is fine, tourists can see the Bohai Sea in the east, Panshan Mountain in the north through the high-powered telescope and the beautiful scenery of Tianjin all around. The second floor faces the West Bank and is 257 meters high. It houses nearly 10,000 books covering a wide range of 22 subjects such as astronomy, geography, history, philosophy, literature, and art etc. It is the highest study in China so far, and a comprehensive space for reading, viewing and leisure.

The Sky Tower Scenic Spot is listed as a national 4A level scenic spot, ranking first among the ten scenic spots in Tianjin, and has a reputation as the “Sky Tower with Swirling Clouds”. 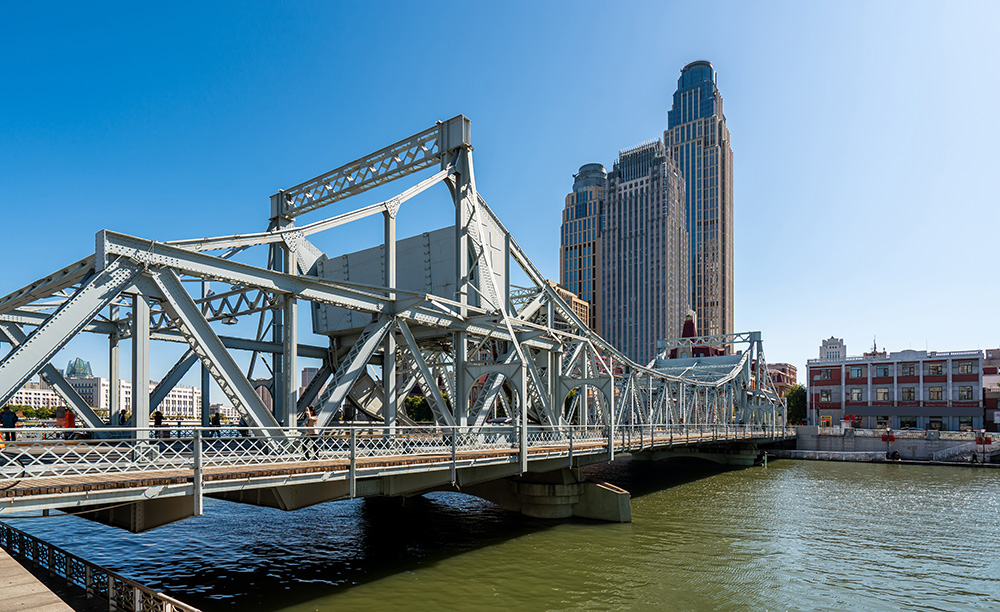 It is an all-steel movable bridge built in 1927. The bridge is 97.64 meters long and the total width of the bridge deck is 19.5 meters. It is not only one of Tianjin’s landmarks, but also a hub bridge connecting Hebei, Hedong and Heping districts and the Tianjin Station area.

The original name of Jiefang Bridge was “Wanguo Bridge”, meaning international bridge. At that time, Tianjin had nine concession areas, namely UK, France, Russia, America, Germany, Japan, Italy, Austria, and Belgium hence the name which was given in 1949. After the liberation of Tianjin, the bridge was officially renamed Jiefang Bridge, meaning “Liberation” Bridge, and is still in use today.

Jiefang Bridge is a double-leaf vertical steel structure bridge. There are 3 parts to the bridge, each with its own arch. A fixed track forms the lower part of the bridge. When the bridge is opened, the “truss” units move along the track and opens the bridge to make way for boats. It is closed for cars and opened for water traffic.
Ships passing under Wangguo Bridge are part of the daily scene here.

Today’s Jiefang Bridge, the Tianjin station and the century clock just around the corner form a welcoming scene to greet visitors. In addition to performing traffic functions, the ancient charm of the area makes it a good site for taking pictures. Nearly a century old, Jiefang Bridge is like an old man, telling passing locals and visitors about the past. 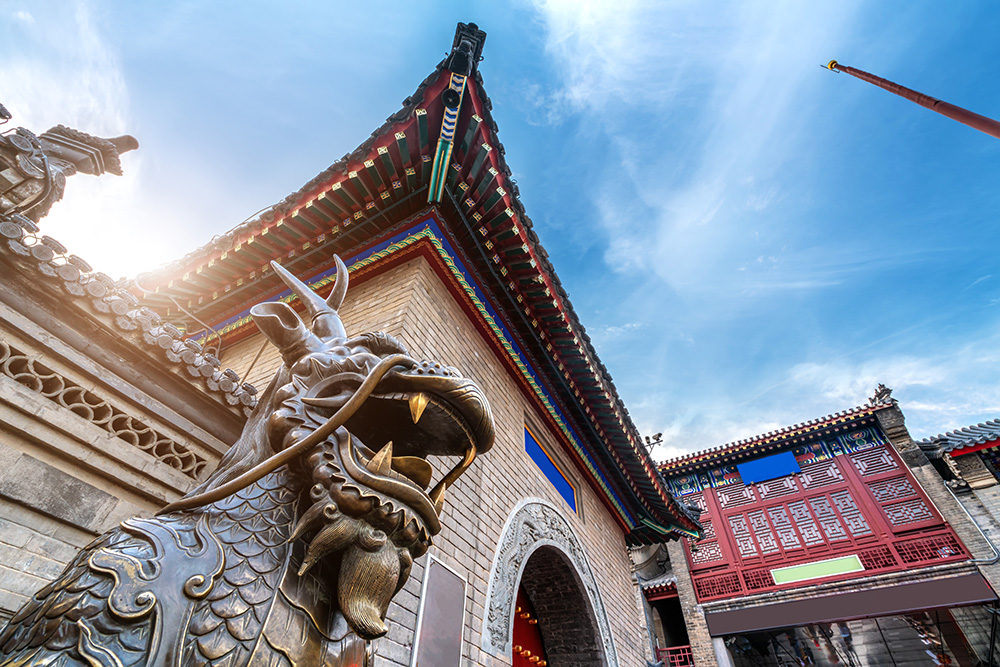 Ancient Culture Street is composed of small folk shops which imitate the style of the Qing dynasty. In the center is the Tianhou Palace, a historic site from the Yuan dynasty. It is the main highlight for visitors on the ancient cultural street. Tianhou Palace, is commonly known as the Empress Palace. There are nearly 100 shops on the Ancient Culture Street, which are based on Tianjin’s old-style shops and small folk handicrafts.

Since ancient times, the area around the Guwenhua Street has been Tianjin’s biggest market and spring festival market. Every spring, grand imperial ceremonies— such as the celebration of the empress’s birthday were held here with performances like stilt walking, dragon lantern displays, “land boat” performances, lion dances and so on. In the newly renovated Ancient Culture Street, besides the archway at both ends and the theatre in front of the palace there is also imitation Qing-style “big architecture”. The rest of the nearly 100 houses are made in the style of Qing folk small ancient buildings.

There are two memorial archways at the south gate and the north gate of the ancient culture street. “Jin Men Gu Li” or “Hometown of Jinmen” is written on the plaque at the south gate   referring to how the Tianjin city of today gradually formed with this place as the original center. “Gu Shang Yi Yuan” is written on the plaque at the archway of the north gate acknowledging how the street’s appearance, shops and goods create a very strong artistic atmosphere, especially the antiques, calligraphy, painting, “four treasures of the study” and Tianjin folk arts and crafts. This showcase can inspire people to appreciate and nurture the national culture. The two large archways stand in the street corner exquisitely, with their magnificent colors and simple inscription. People are inspired to dream of a bright future rooted in the foundation of history. 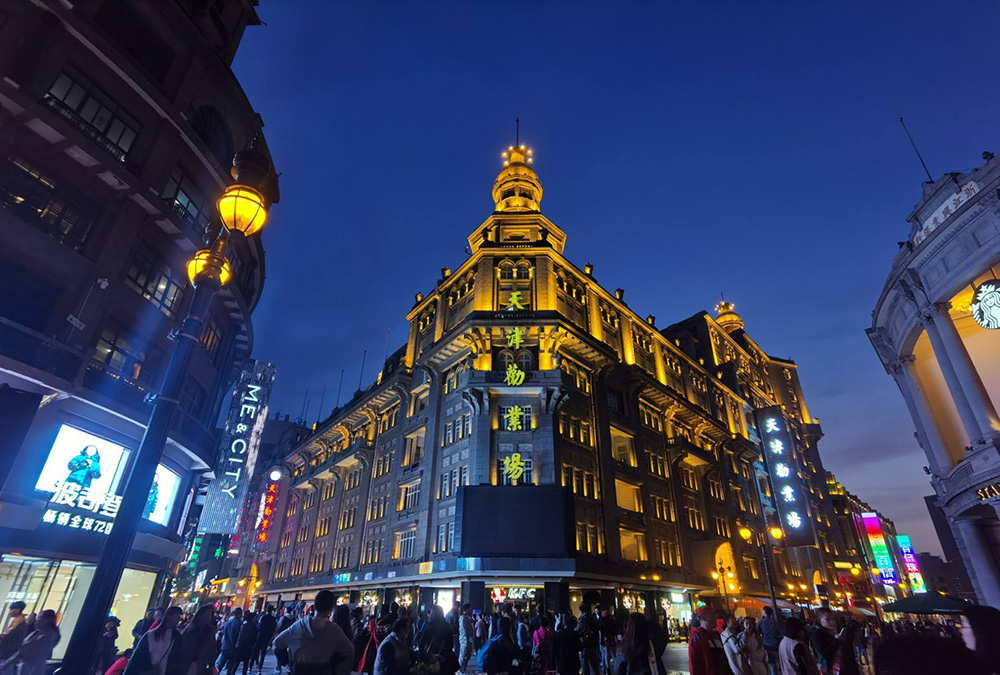 The Tianjin QuanYeChang Building used to be the largest shopping mall in China. It is a large building integrating commerce and entertainment and is a symbol of Tianjin’s commerce. It is one of the three major retail department stores and one of the top ten famous department stores in Tianjin. It has 30,000 varieties of commodities, and  the commodities sold here are sent are all over the country. It is famous for its comprehensive coverage of small commodities.

Tianjin QuanYeChang Building was founded by Gao Xingqiao and completed in December 1928. Because the site is located in the old French concession, it was originally named the French market. Then, after adopting the opinion of shareholder Zaizhen (Prince of Qing), it was renamed the QuanYe market.  At that time, a banner was hung up in the market exhorting everyone to work hard and develop their career.

When Tianjin QuanYeChang Building started construction in 1926, Gao Xingqiao hired a French engineer to handle the design. The architectural style was significantly affected by eclectic architectural forms. The main body has five floors, and the corners have seven floors. Its frame structure is made from reinforced concrete. On the seventh floor, is a tower consisting of two hexagonal tower bases, two circular bodies and a domed tower top equipped with a flagpole and lightning rod as decoration. These additions make the building look magnificent, tall, and straight.

After the liberation of Tianjin, QuanYeChang continued to be improve and expand its scope to become a large comprehensive department store in Tianjin. After China implemented policy reform and opened, QuanYeChang was unceasingly renovated. The old store fronts were rejuvenated, and it became a modern shopping mall integrating shopping, sightseeing, and leisure. 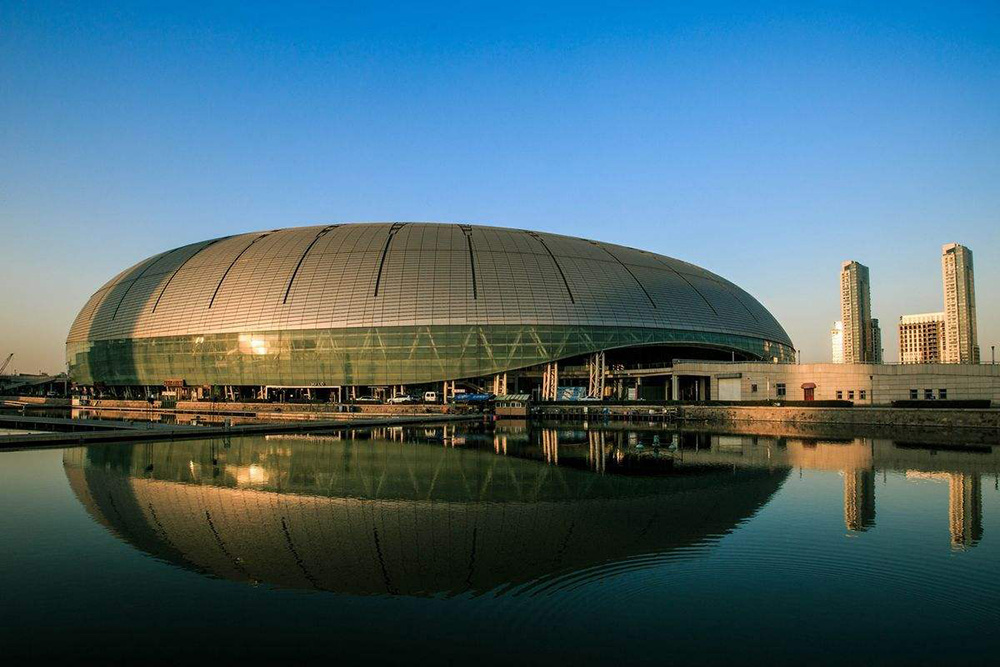 The central stadium design was done by AXS Satow and aimed to highlight the concepts of “Green Olympics”, “Hi-tech Olympics” and “Humanistic Olympics”. There are 60,000 audience seats, 500 podium seats and 300 press gallery seats. In total, it can accommodate 80,000 people. It meets the requirements of international football, track and field competitions, and also has a number of auxiliary facilities, such as stores, exhibition halls, conference rooms and fitness rooms. It is a comprehensive stadium integrating leisure, entertainment, fitness, and shopping.

The Central Stadium is an irregular elliptical building shaped like a drop of water. The bright silver exterior made of metal and glass, gives it a smooth silhouette, and imparts a sense of glittering and translucent brilliance to the venue. It is surrounded by clear water on all sides. From a distance, this stadium appears like a drop of water splashing into the water.

Outdoor Fitness Trail: free and open for 24 hours every day

Outdoor Play Areas for Kids: free and open for 24 hours every day

Circular corridor on the 2nd floor: free and open for 24 hours every day