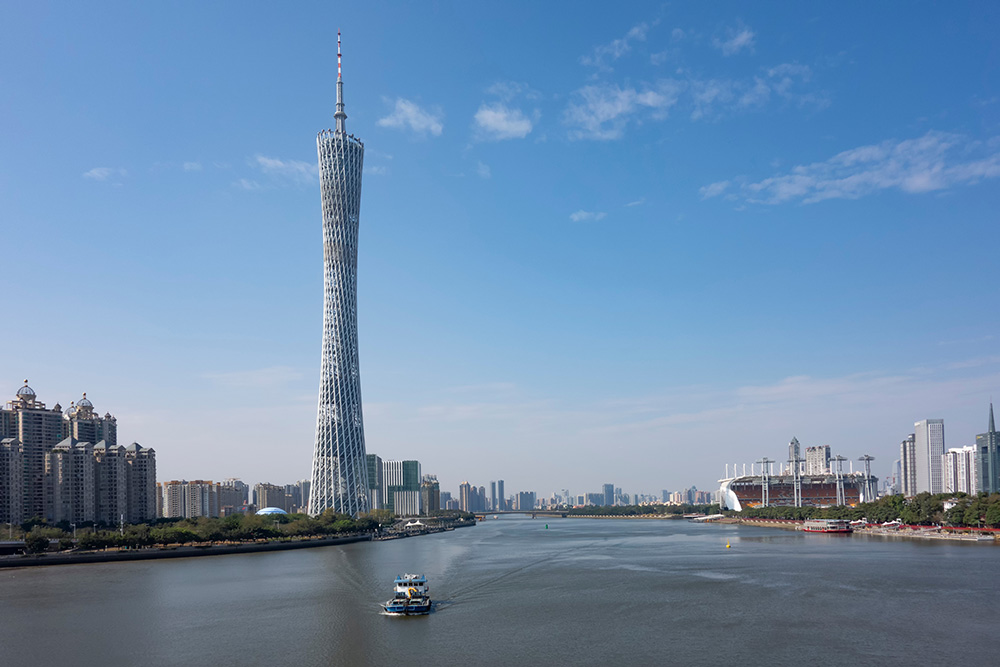 Canton Tower is located at the intersection of the new central axis of Guangzhou city and the natural axis of the Pearl River. It faces Flower City Square, Haixinsha Asian Games Park and the CBD of Pearl River New Town across the river. Canton Tower is the narrowest tower in the world and was also the hardest to construct. It is an iconic piece of architecture created by builders and architects who had to overcome many difficulties. As a result of the unique design and the narrowing at the middle part of the twist, it is often called “Slim Waist”.

The main body of the Canton Tower is 454 meters high, and the antenna adds a further 146 meters, giving a total height of 600 meters. It is the tallest tower in China and the fourth tallest in the world. Its overall layout fully considers the surrounding environment of the site. Since the tower is close to the Pearl River and Binjiang Road, various ways to mitigate the impact of the tall tower on the nearby residents had to be considered. In addition, the main tower is surrounded by a large, irregular-shaped overhead platform which offers a beautiful view of Guangzhou and the Pearl River Delta.

There is a green belt around the tower. To the south of the tower, there is a green plaza and underground space. To the north, it crosses Binjiang Road and after a series of green steps, there is a water-hugging platform, seamlessly connecting it to the Pearl River and the riverside landscape belt.

Opening times: 9 am – 11 pm (Opening hours may be extended on public holidays) 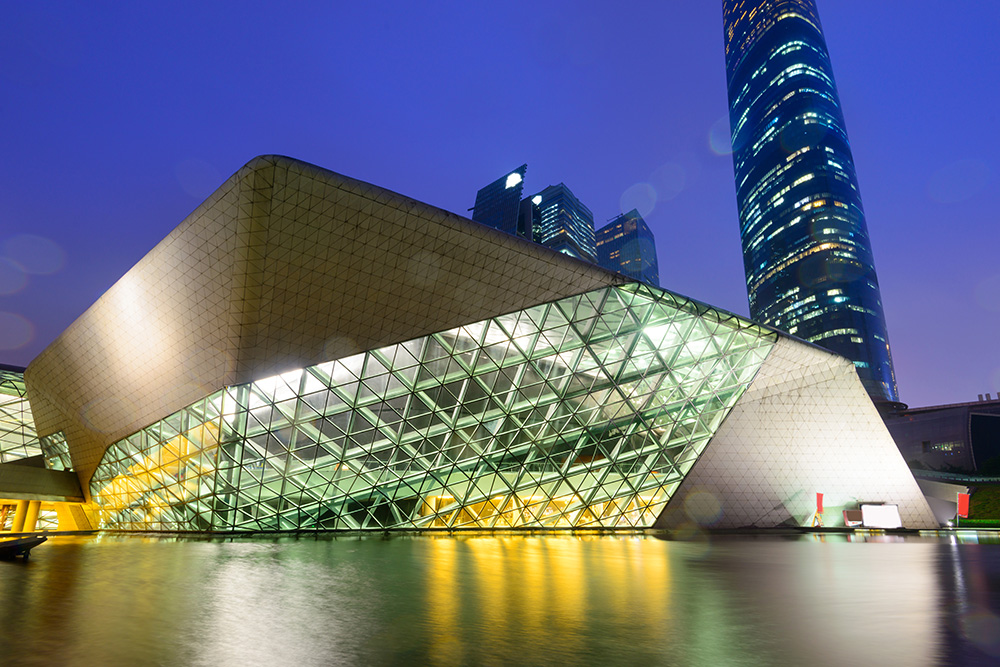 Guangzhou Opera House is one of the landmark buildings on the new central axis of Guangzhou. It is located beside Flower City Square in Pearl River New Town, and is adjacent to the city’s CBD, the new financial center of China.

The main building of Guangzhou Opera House has black, white, and gray tones. It is described as a “double pebble”, or more specifically, “round double pebble”, as it has no vertical columns or vertical walls. It is designed with many irregular geometric shapes, and looks like two pieces of spirit stones washed up by the Pearl River. Strange in shape, and complex and changeable, it gives a sense of whimsy. The internal design has a viewing stand which looks like embracing hands; that is to say, the raised part on both sides of the auditorium overlaps the platform. Everything seems in picturesque disorder. The acoustics system of Guangzhou Opera House was meticulously fine-tuned by the world’s top acoustics masters, meaning that the Guangzhou Opera House delivers nearly perfect audio-visual effects. 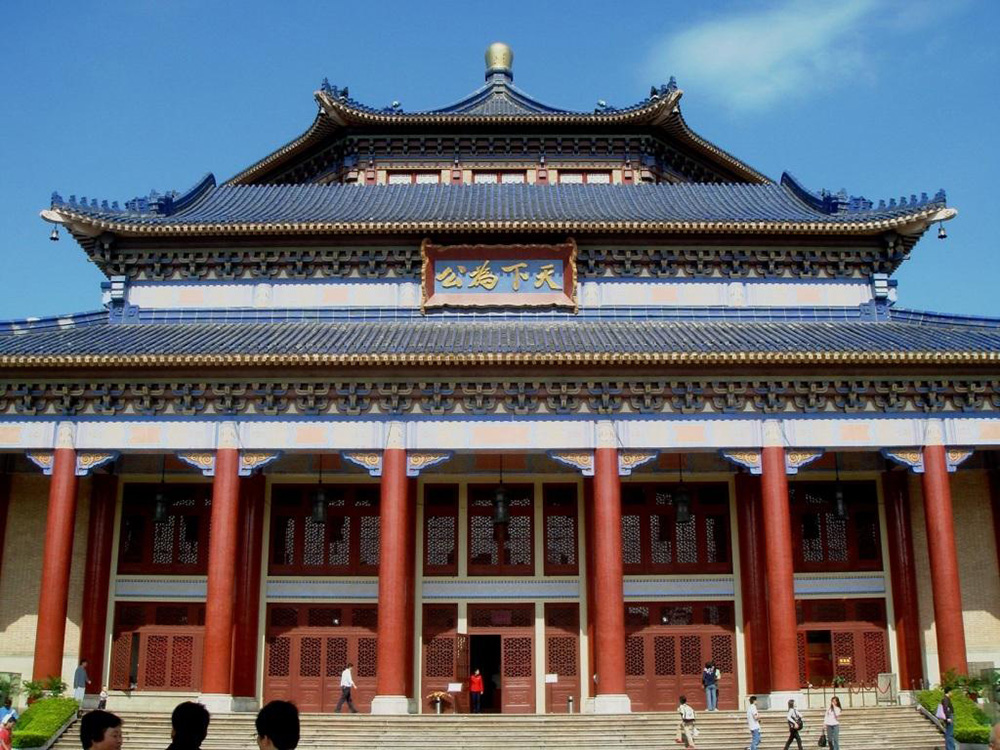 Guangzhou’s Sun Yat-sen Memorial Hall is an octagonal palatial-style building. The main building uses advanced steel structure construction technology, typical of the west, but also creatively uses ancient Chinese architectural techniques. It seamlessly combines Chinese and Western architectural forms, and is renowned around the world. It is surrounded by four gabled and hipped roofs, which support the central octagonal pointed roof. White granite is used for the base and the steps, light blue marble forms the wainscot, and creamy yellow tiles cover the walls. Below the eaves at the front of the building, a horizontal plaque showing the four words “Tian Xia Wei Gong” (the whole world as one community”, in Sun Yat-sen’s own handwriting, is firm and empowering.

Since its construction, the Guangzhou Sun Yat-sen Memorial Hall has always acted as a witness of the historical changes and events of Guangzhou. In 1936, for example, people from all walks of life in Guangzhou participated in the anti-smoking parade; in September 1945, the Japanese invading troops who had stationed themselves in Guangzhou signed their instrument of surrender here.

The present Sun Yat-sen Memorial Hall has gone through many repairs and improvements. Modern scientific and technological equipment have been employed on the basis of retaining and maintaining the original architectural features. This not only preserves the historical and cultural heritage, but also ensures the safety of the public when they visit.

The Sun Yat-sen Memorial Hall places great emphasis on the overall layout. Taking the line which goes through the Main Gate, the bronze statue of Sun Yat-sen, and the Main Building, as the central axis, other features are symmetrically distributed east and west of this axis. At the very south of the complex is the Main Gate of the Memorial Hall, which was completed in 1933. Walking north through the gate is an open lawn, and a pair of huabiao (ceremonial columns) depicting clouds and cranes are located on the east and west sides of the big lawn. Further north is the bronze statue of Sun Yat-sen, standing in the center of the Memorial Hall. Beyond the statue, there are a pair of symmetrical flagpoles and white orchids, while on the east and west sides of the main building, there are symmetrical annexes.

Temple of the Six Banyan Trees 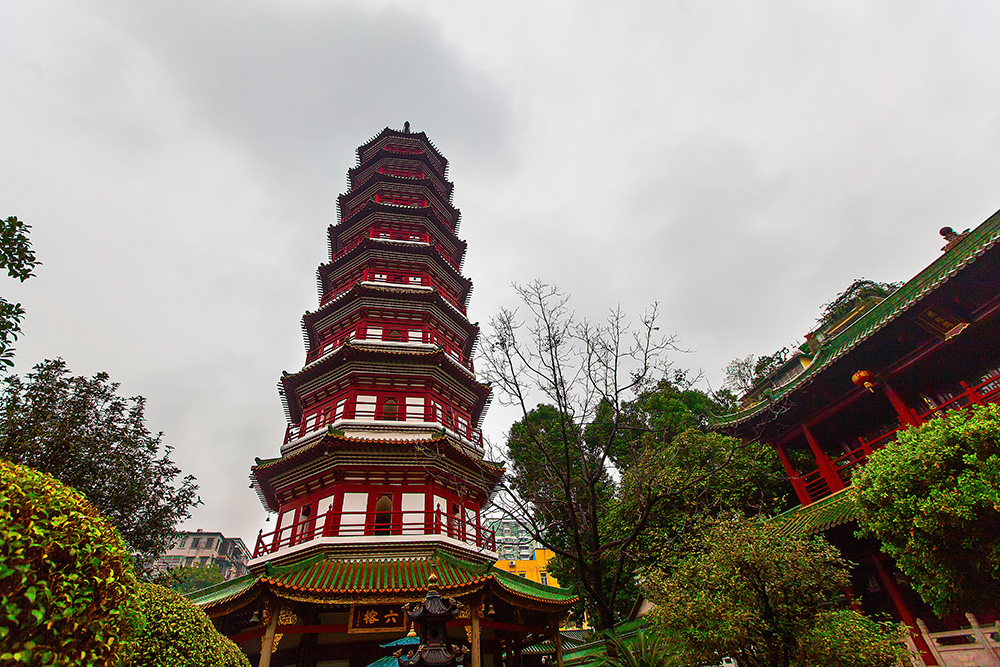 The Temple of the Six Banyan Trees is a historic temple, famous at home and abroad. It was built during Emperor Wu of Liang’s reign, during the Northern and Southern dynasties period. It was originally named Bao Zhuang Yan Temple, but after Su Dongpo, a famous Chinese poet and politician, made an inscription within the temple, it was renamed as the Temple of the Six Banyan Trees.

The pagoda of the temple towers tall, the trees grow abundantly, cultural relics are everywhere, and many famous footprints have imprinted themselves here. There is a plaque hanging on the front gate which reads “Liu Rong” (Six Banyan Trees) which was handwritten by Su Dongpo. The couplets on either side of the door which read: “Yi Ta You Bei Liu Bo Shi, Liu Rong Wu Shu Ji Dong Po” (The pagoda has a stele to memorialize the learned. The six banyans have no tree to memorialize Dongpo.), were written the poet, Chen Xue Lu, in the early years of the Republic of China. It refers to the idea of impermanence and history. The “learned” that he refers to is the Tang dynasty poet, Wang Bo, who left an inscription in the temple. The six banyan trees that Su Dongpo saw have all but disappeared.

The original Jinghui Temple was quite large, covered a wide area, and had a gate facing the south. However, in the sixth year of Emperor Hongwu’s reign in the Ming dynasty (1374), half the area of the temple was converted into Yongfeng Granary. Since then, the main gate has been shifted to the east, and the area of the courtyard has gradually shrunk. The current Temple of the Six Banyan Trees covers more than 7,000 square meters. From the west of the gate, there is the Hall of the Heavenly Kings, the Flower Pagoda, and the Grand Buddha Hall. Towards the north, there is the Jie Xing Abode. Towards the south, there is the Stele Corridor, the Guanyin Hall, the Six Ancestor Hall, and the Bu Rong Pavilion. Most of the halls and houses were rebuilt or newly built after the Qing dynasty. Only the Hall of Heavenly Kings still retains the architectural style of the Ming dynasty.

The Flower Pagoda is the stupa of the Temple of Six Banyan Trees and is the most impressive building in the temple. From outside, the layers of eaves on the corners of pagoda look like jujube-red flower petals opening to the sky. The top of the tower resembles a flower stamen. The whole pagoda is like a huge flower column growing straight towards the blue sky. The tower’s body is red and white, making it very eye-catching.

Also, within the temple, there is a Friendship Buddha Hall, where a bronze statue of Sakyamuni Buddha was presented by the Thai Ministry of Education in 1985. 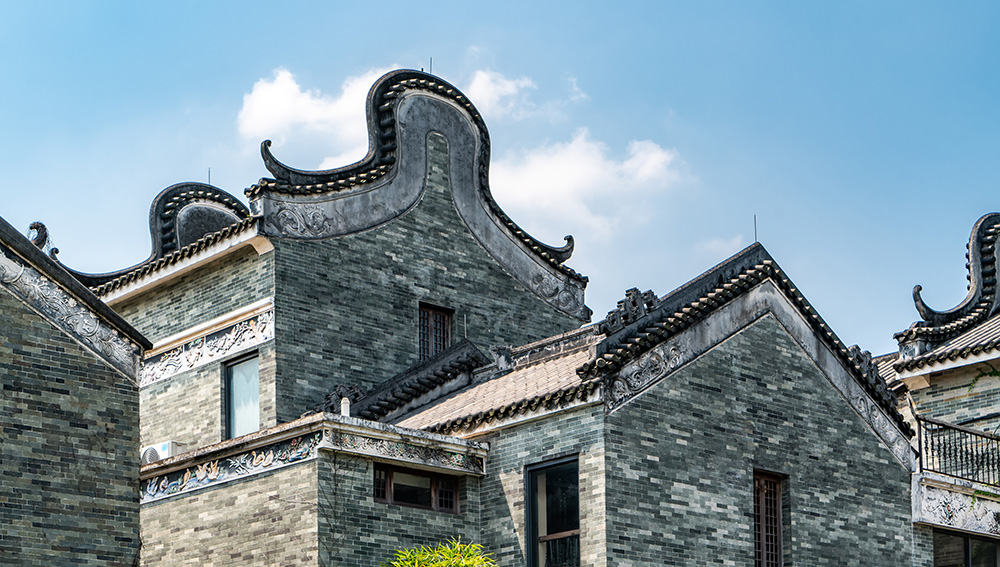 Shawan Ancient Town was founded in the Song dynasty. Over a period of 800 years, this town has contributed to and retained Lingnan culture, as can be seen by the traditional historical culture and folk culture displayed in the town. It is an outstanding representative of Cantonese culture within the Pearl River Delta area. It is rich in both tangible and intangible cultural heritage.

Walking in Shawan Ancient Town Scenic Spot, you can clearly see the historical development of the ancient town. The ancient village pattern of stone steps and stone alleys is still well preserved. Ancestral halls and ancient houses are strewn at random, and their eaves, rafters, and beams are artfully decorated.

Shawan Ancient Town is especially famous for its architectural sculpture art, Cantonese music, floating color parade, dragon and lion dance, and cuisine. Cantonese music has hundreds of songs composed by He’s three masters, such as the Dragon Race, Rain Lashing on the Plantain, the Ringing of the Hungry Horse. Shawan’s floating color parades are famous for their delicate colors and ingenuity. It is a fantastic example of traditional folk art. In terms of Shawan’s traditional dishes, you’ll find Shawan bieci goose, goose with black bean sauce, doggie porridge, Shawan soy chicken, and milk banquet. All of these are very appetizing. Shawan ginger milk is even more popular and is renowned in Hong Kong and Macao.