Window of the World 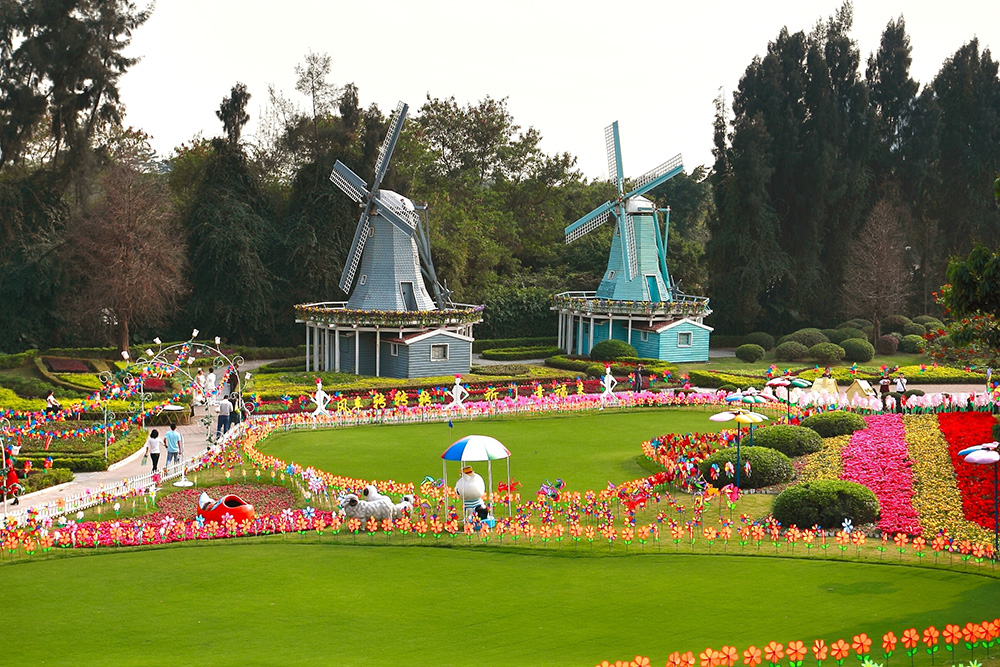 Window of the World is located on Shennan Avenue, Shenzhen Bay Community, Shenzhen City, Guangdong Province. It is a large-scale cultural and tourist attraction founded by OCT Limited and China Travel Service (Hong Kong) on June 18, 1994. It is not only a famous scenic spot for miniatures in China, but it is also a theme park which aims to promote cultures around the world by integrating wonders of the world, historical sites, ancient and modern scenic spots, folk song and dance performances.

The park is divided into eight thematic areas: World Square, Asia, America, Africa, Oceania, Europe, Sculpture Park, and International Street. Each area contains world-famous cultural landscapes and architectural wonders, including the pyramids in Egypt, the Arc de Triomphe in France, St. Peter’s Basilica in the Vatican City, the Leaning Tower of Pisa in Italy, the Taj Mahal in India, the Sydney Opera House in Australia, and the Grand Canyon in the United States. These scenic spots are modeled at ratios of either 1:1, 1:5, or 1:15. People can view the whole city of Paris from the miniature Eiffel Tower, which has been reduced to a third of its size.

Each area has a distinct style. There are ten representative statues of the world at the front of the World Plaza. Surrounding it are 108 tall pillars, and there is a relief wall showing the civilizations of the world. Along with the six gates representing the different cultures, the whole area has a sense of grandeur and solemnity. The rest of the regions also have their own cultural heritage and continental characteristics.

During major festivals both at home and abroad, Window of the World sets up special park layouts and festive activities to allow tourists to experience the charm of the world’s many civilizations. 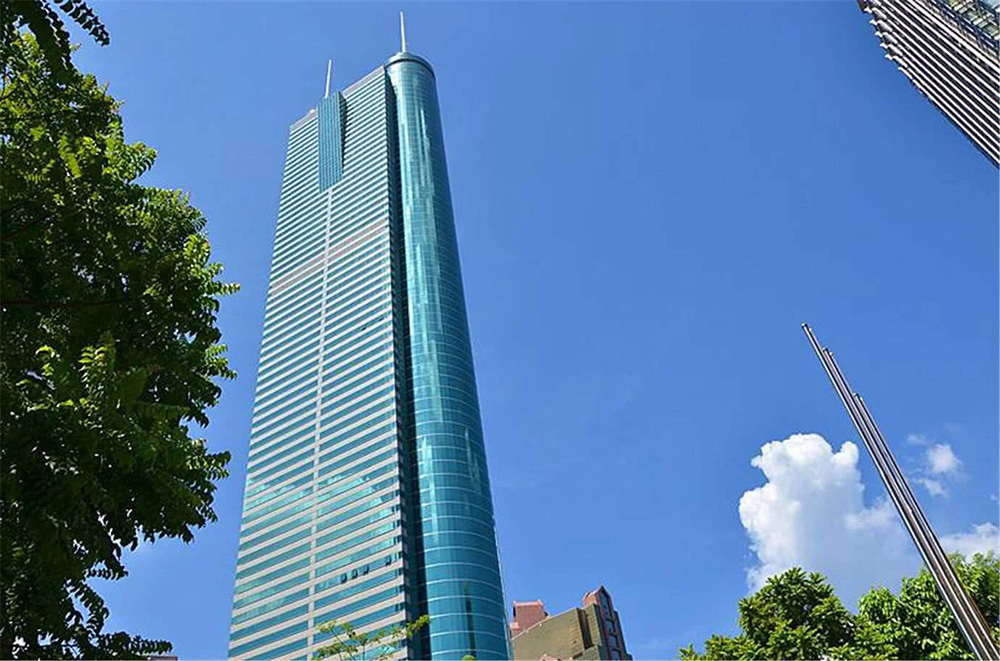 Di Wang Tower, located in Shenzhen’s Luohu district, is truly the king of the real estate industry. The entire building is designed by Chinese-born American architect Zhang Guoyan, who hoped to create high-rise building that seamlessly integrated offices with commerce. Di Wang Tower was completed in 1996 and put into use in 1997, and is the perfect symbol of reforming and opening-up of the Shenzhen Special Economic Zone. When it was completed, it was the tallest building in China at that time.

In December 1996, upon its completion, Di Wang Tower won third place in the National Science and Technology Progress Award for its comprehensive construction technology. On September 9, 2017, it was listed in the first batch of Historic Buildings in Shenzhen. In 2018, it was selected into the third batch of China’s 20th Century Architectural Heritage Project List.

The whole building is modern and multi-functional, integrating offices, commercial residences, finance, sightseeing, catering and entertainment. It is 69 floors high, with a total height of 383.95 meters and an actual height of 324.8 meters. The building is divided into three parts: the main part are the offices which cover 68 floors, and is composed of two columnar towers. The auxiliary building is a serviced business residence on 33 floors. The two columns face each other, and through a giant doorway in the middle, the building is connected north to south. These various features form a multi-faceted and unique landscape. Furthermore, a five-story shopping complex in the middle links the two towers.

By combining both Chinese and Western ideas, the building integrates the Western-style design of churches with the transparent and thin essence of classical Chinese architecture. Therefore, it is one of the world’s flattest and thinnest high-rise buildings on record. The width to height ratio is 1:9, which is truly staggering. 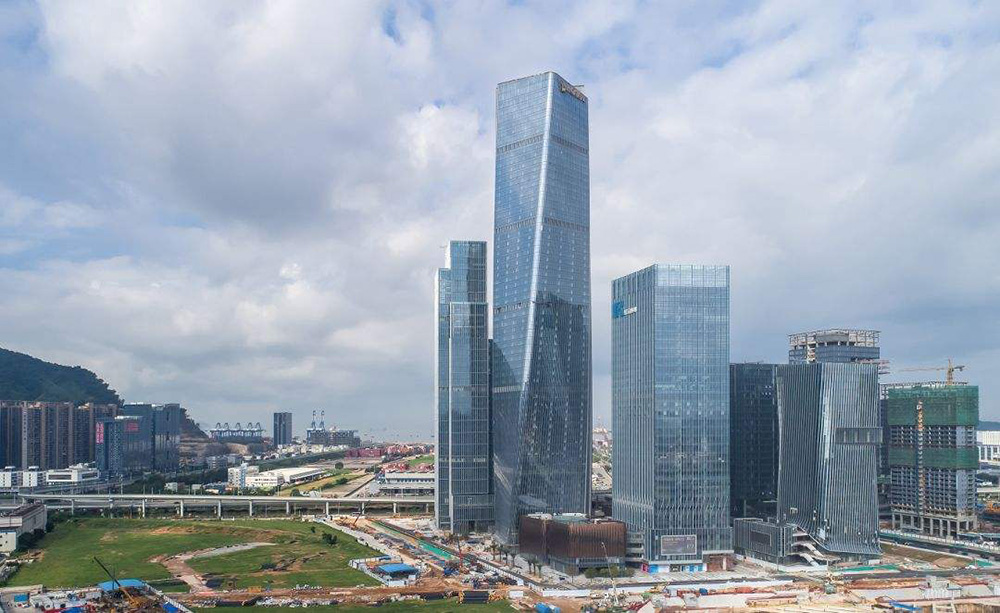 Shimao Qianhai Center is located at the intersection of Xinghai Avenue and Linhai Avenue in Qianhai Free Trade Zone, Nanshan, Shenzhen, founded by Qianhai Shimao Development (Shenzhen) Co. Ltd, and designed by the Shanghai Center design team, Gensler, who have designed the best of the Top 10 Twisting Buildings in the world.
Shimao Qianhai Center is 300 meters high, with a unique dual rotating façade covering 45%. In the background, we see the mountains and the sea. The internal and external design, the simple curtain walls, the fans which add unique colors, the double helix structure form, and the sweeping curves all add to the beauteous form of the building. It is one of very few in the city.

Shimao Qianhai Center is an important transportation hub in the city’s central area, as it has an advantageous geographical location. On the south and east sides, you can see both the tall and small mountains of Nanshan. On the west side, you can see Lingding Ocean, and looking to the north, you can admire the view of the city. The whole center is complemented by a 300 meter tall office building and 6 commercial complexes. The whole set of buildings is built upon the subway, making it unique in Qianhai. The seamless connection between the commercial area on the second floor and the railway station on the extension of Metro Line 5 is also an internationally advanced TOD model.

The overall development of the block is mature as a whole with 6 buildings including SF Express, Xiangjiang and Gionee surrounding Shimao Qianhai Center. With convenient transportation, beautiful scenery and unique design, it is not only the international benchmark project integrating financial and business enterprises in the Greater Bay Area, but also the beginning of the whole group’s international strategy.

There is a full array of facilities surrounding the area. Whether medical needs, education needs or simply the pursuit of the ultimate shopping experience, you are just one stop away.

Location: The south side of the intersection of Nanshan Linhai Avenue and Xinghai Avenue 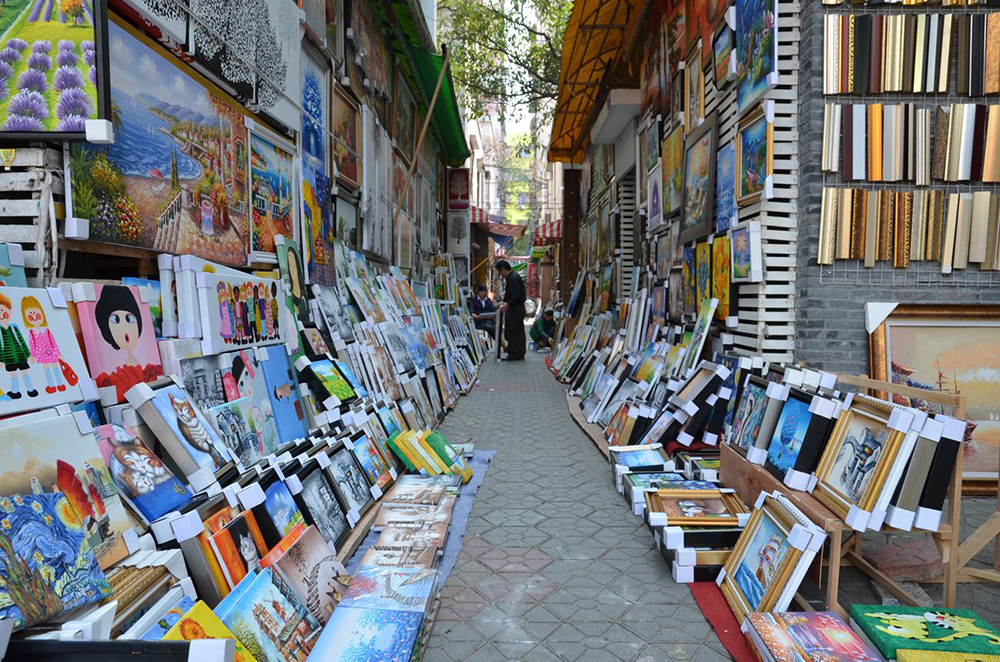 Dafen Oil Painting Village, located in Dafen Village, Buji Street, Shenzhen, was originally just one of the many local Hakka villages in Shenzhen. More than 300 residents used to live here. Later, in 1989, a Hong Kong art dealer named Huang Jiang went to Dafen Village to rent private houses and recruited students and painters who would copy, create and collect oil paintings and sell them in batches. Over the years, Huang Jiang successfully brought the special cultural industry of oil painting to Dafen Village. It is now honored as the top oil painting village in China.

The overall layout of the classical architecture in Dafen Oil Painting Village is in the form of Hakka row houses. In the village, all kinds of galleries are scattered around. The lanes between them look like long corridors of a gallery. Each oil painting shop has its own style and characteristics. In these workshops, and even on the street, you can watch the actual process of painting take place and even ask for a customized painting to suit your own needs. At present, there are more than 1200 galleries and stores in the area.

In Dafen, excellent original artists have come together. A large number of original oil painters have decided to take root here and display their talent and charm. Moreover, through the Internet, Dafen has made its presence online as well as offline, so that the world can get to know Dafen.

Dafen Village is open all day without any admission price. It is accessible from any subway station in Shenzhen, as it is along the Longgang Line. 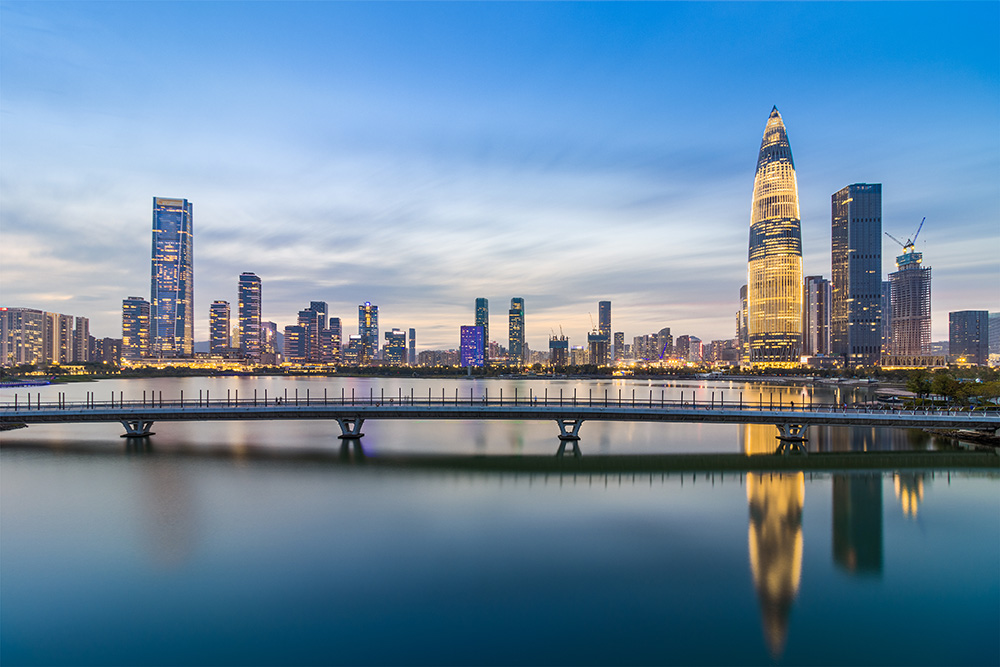 Shenzhen Bay is located between the northwestern part of the New Territories in Hong Kong and the eastern Nanshan District of Shenzhen. It was originally called Back Bay, referring to the fact it lay behind the front bay of Shenzhen.

The whole bay area integrates leisure, entertainment and commerce, with Shenzhen Bay Park, Shenzhen Hongshulin (Mangrove) Seashore Ecological Park and Shenzhen Bay Waterfront Leisure Belt (currently under construction). Visitors can take subway line 9 to Shenzhen Bay Park and arrive within walking distance. Whether it is cycling, jogging, or simply chilling out, it is always the best choice. The park is connected by a series of walkways, bicycle paths and promenades. The delightful and beautiful scenery is like a string of pearls bordering the sea.

The Shenzhen Bay Waterfront Leisure Belt will contain twelve different parks of varying themes, including Middle Bay Sea View Square, Sea Sound Park, Egret Slope, North Bay Heron Port, Little Sandy Hill, Wind-Chasing Wheel Park, Lihuashan Park, Crescent Valley, Sunrise Open Air Amphitheater, Tide Park, Wedding Square and Seabreeze Sports Park. Each park has a unique theme and visitors can appreciate the flowers and the moon, as well as take part in various sports and leisure activities. Visitors can climb to the top of the peak and enjoy a beautiful view of Shenzhen Bay. In the east, there is a roller skating park on the side of the mountain, where people can have a real adventure. Visitors can choose from a variety of themes in the west and also admire the plant culture which has been fully integrated, and forms an endless scene of beauty.

The park and other recreational areas are accessible all day, but use of the bicycle path is prohibited between 9 a.m. and 5 p.m. on weekends and holidays. At other times, you can ride all the way along Shenzhen Bay and enjoy the spectacular view.