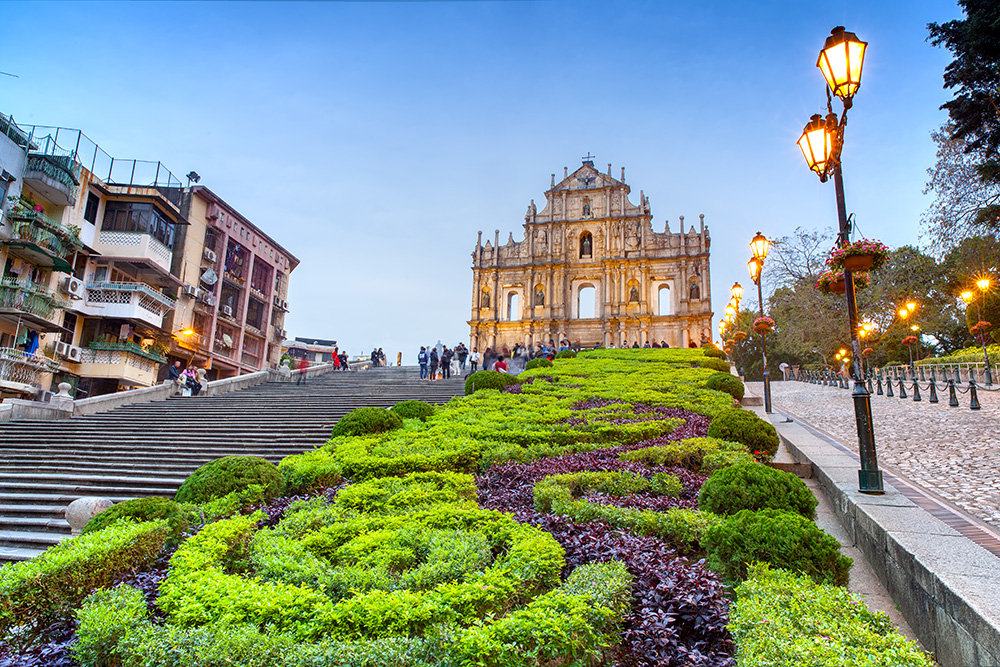 The Ruins of St. Paul’s, located near Daba Street, are known as Macao’s scenic spot. It is the front wall of the old Church of St. Paul. The church was built between 1602 to 1640 and was attached to St. Paul’s College, the first Western-style university in the Far East. A sudden fire destroyed the two buildings in 1835. Churches, colleges, and Monte Fort are all Jesuit architectures, which together constituted Macao’s military defense.

The archway was built according to the classic story of Jesus’ ascension to heaven and is about 25.5 meters high and 23 meters wide. It was divided into five floors in the Italian Renaissance “Baroque ” or “Mannerism” style. If you look closely, various elements can be found in the stone carvings, such as biblical patterns, mythological symbols, Chinese characters, chrysanthemums, Portuguese ships, various nautical patterns, Chinese lions, bronze statues of Catholic saints and more. All of which are very vivid and perfectly combine the characteristics of Chinese and Western cultures, making these ruins a unique architectural treasure.

Today, you can still climb to the top of the Ruins of St. Paul’s to enjoy the charming scenery of Macao. While you are there, don’t forget to visit the Museum of Sacred Art and Crypt, where you will find historical relics of great value. Beside the ruins, you can also visit the Macau Museum, the Monte Fort, and the Na Tcha Temple nearby, these buildings, along with St Paul’s Ruins, are all part of the Historic Centre of Macao and became a UNESCO World Heritage Site in 2005.

Senado Square is an essential hub in Macao. All festive events take place at the plaza and a lot of cultural heritage is concentrated here.

Senado Square connects Largo do São Domingos and the Avenida de Almeida Ribeiro. The square was named after the “Senado” (City Hall) of Portugal’s ruling period. At the front of the square, a fountain stands in the center, echoing the style of the surrounding Portuguese buildings. In the early 1990s, the front area was paved in the Portuguese-style, which vividly represents the sea and its waves adding a certain rhythm and elegance to this historical place. To this day, vehicular traffic is restricted in Senado Square, and it is maintained as a completely pedestrian area.

Several buildings around Senado Square date back to the end of the 19th century, most of them have high artistic and architectural value, such as the Municipal Affairs Bureau; the Santa Casa da Misericórdia (built in the 18th century), the St. Dominic’s Church, the Largo do São Domingos and the Macau General Post Office.

On the left side of the Senado Square is the Sam Kai Vui Kun or Kuan Tai Temple, located near the former site of  the Chinese Chamber of Commerce, now the Mercado de S. Domingos Municipal Complex. The temple exhibits the harmonious integration of Macao’s different cultures. Sam Kai Vui Kun is also the place where Festival of the Drunken Dragon Macau (also known as the Drunken Dragon and Lion Dance Gala), a celebration for fishmongers, held on the eighth day of the eighth lunar month. The celebrations are colorful and lively, including the distribution and tasting of “longevity rice”. The celebrations culminate in the climax of the “drunken dragon parade” with the “drunk dragon dance” and “lion dance” performances.

After many renovations and reconstructions, Senado Square has become a must-see tourist attraction for all visitors to Macao. It is also a stage for various events and performances throughout the year, attracting tourists and residents alike. There is a government tourism service office towards the front of the square, where you can find tourist information, maps, and travel brochures, as well as souvenirs. In addition, there are many restaurants, cafes, shops, and market stalls here. 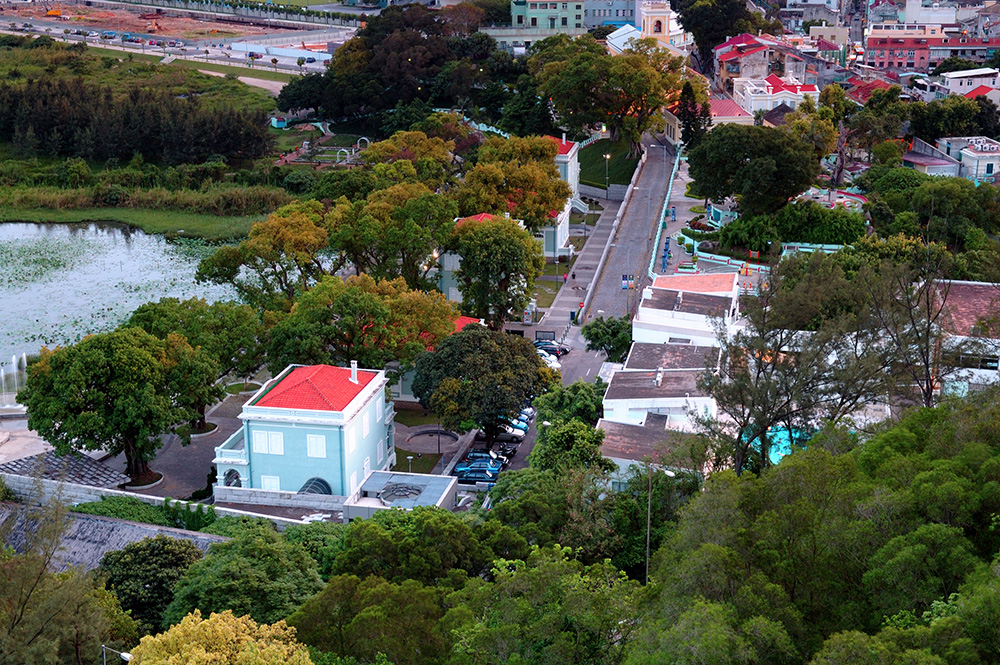 The Old Taipa Market was created in the early 19th century and became the cultural center of the entire region. Every Sunday, a market is held in front of the market structure. You will find stalls selling various handicrafts. A few steps away is Largo do Carmo, where the only Catholic church in Taipa, Our Lady of Carmel Church is located. The church is a Portuguese style building built in 1885, with a cemetery and a stunning garden. It is an ideal choice for weddings and sightseeing.

The Taipa Houses-Museum is made up of five Portuguese style houses built in 1921 and were originally used as the official residence of senior government officials (i.e., Macanese families). In 1992, they were classified as buildings of architectural interest. Later, they were renovated and converted into a museum site and opened to the public in 1999 under the name Taipa Houses–Museum. In September 2016, the Macao SAR Government transformed the five buildings into the ‘Macanese Living Museum,’ ‘Exhibitions Gallery,’ ‘Creative Casa,’ ‘Nostalgic House’ and ‘House for Receptions’ from west to east respectively. Admission to all pavilions is free and typically admissions are from 10 a.m. to 7 p.m.
Every year, many activities and events are held in Taipa Village, such as street performances, the Lusofonia Festival etc. Here, creativity, culture, and entertainment go hand in hand.

The Old Town of Coloane 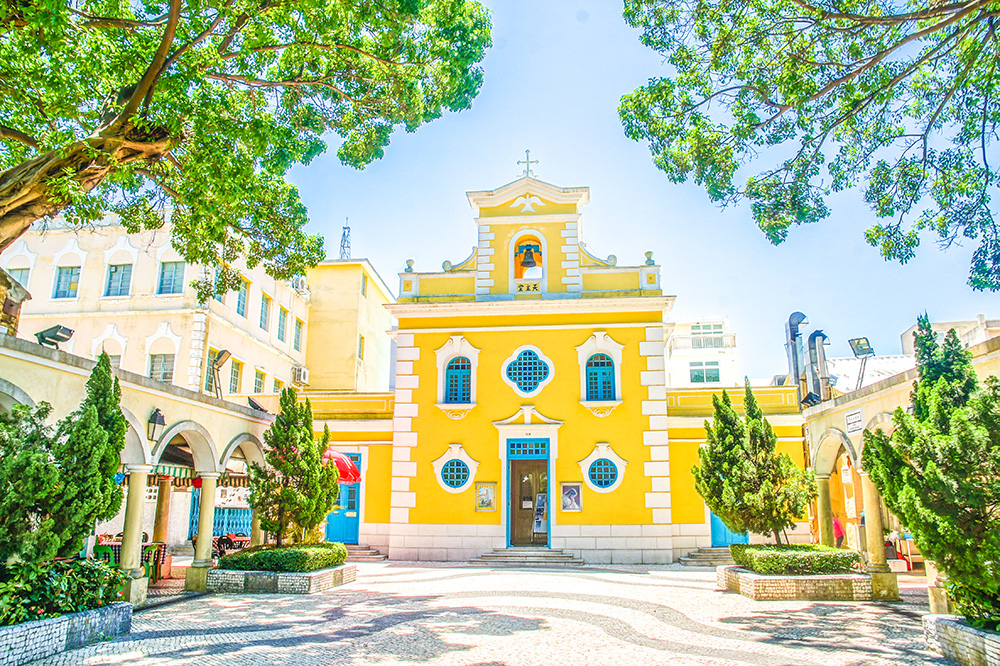 Quiet and serene, to this day, Coloane Island has retained its original natural scenery. It is an ideal leisure and holiday destination for Macao residents.

The Largo do Presidente Antonio Ramalho Eanes (a former Portuguese president) forms the center of Coloane Island and is the location of one of Macao’s hottest tourist destinations in recent years —Lord Stow’s Bakery. This bakery keeps the exclusive recipe for making Macao’s egg tarts and many visitors to Macao also visit here.

The history of the Chapel of St. Francis Xavier dates back to 1928. It is a Baroque-style building with yellow and white exterior walls, elliptical windows, and a bell tower. The church holds sacred artifacts from Asian Catholicism, such as the silver bone box containing the right humerus of St. Francis Xavier.

Coloane has a group of famous ancient temples: the Sam Seng Kong Temple (built by fishermen in 1865, dedicated to the Lady of Golden Flowers who blesses children), which reveals the island’s history. The island of Coloane was formerly known as Salt Bay and famous for its salt production. Sea merchants in the 1800s built the Kun Lam temple to commemorate Guanyin the protector of fishermen and sailors and to bring good luck and peace to Coloane. Tam Sin Sing Temple is dedicated to Tam Kong, the holy man who also blessed fishermen. The temples have exquisite tiled rooves and porcelain statues

There are two Tin Hau temples in Coloane. The larger one is located in Tin Hau Square. At its entrance is an incense burner which requires people to tend it. The other is at the entrance of the Minguo Lane with a round door and gilded sculpture.

Ponte Cais de Coloane was rebuilt in 1873 and is now a public wharf for the ships that shuttle from Coloane, Taipa, and the Macao Peninsula. Along the coast, you can see traditional stilt houses made of iron and wood as well as shops selling dried fish, seafood, and the famous salted shrimp sauce (a type of shrimp paste) widely used in Macau cuisine.

Macau is the only city in China where gambling is allowed, and Cotai is the venue for all of this. The Cotai Strip is a new reclamation area located between the islands of Taipa and Coloane. It is home to magnificent tourist and leisure complexes. The most eye-catching of which is the Venetian, one of the world’s largest casinos. The name Cotai comes from the ‘Co’ of Coloane and ‘Tai’ as in Taipa. In this area, we can see the largest casinos and most luxurious hotels, which have earned Macao the title of the Las Vegas of the East. Of course, there are also elements of entertainment, luxury, and leisure here. Cotai brings together the world’s top hotel chains to provide a unique and superior experience for residents and visitors alike. In addition to casinos and luxury hotels, it offers a wide variety of entertainment and attractions, from restaurants, cafes, and bars to the Gondola rides, cable cars, model Eiffel Tower, spectacular shows exhibitions and more.

The Broadway Food Street adjacent to Galaxy Macau is a modern tourist area with about 40 small restaurants, kiosks, and shops serving a wide range of Cantonese, Macanese, Portuguese dishes. Some bars stay open late into the night with live music shows, and there are often musical performances in the small square. This area is very lively on weekends and holidays.

The Cotai Strip is also an area for large-scale events such as the Macau International Trade and Investment Fair (MIF). In addition to serving as a place for leisure, it also provides a suitable space for meetings.
If you want to get to any of the major casinos on the Cotai Strip, you can take the shuttle bus located in each casino. These shuttle buses connect major casinos, border gates, the Outer Harbour Ferry Terminal, Macau Taipa Ferry Terminal, and Macau Airport. The Cotai Strip shuttle is free for everyone, even if you do not plan to gamble. Many public buses also stop at Cotai Strip, and taxis are easy to take as well.