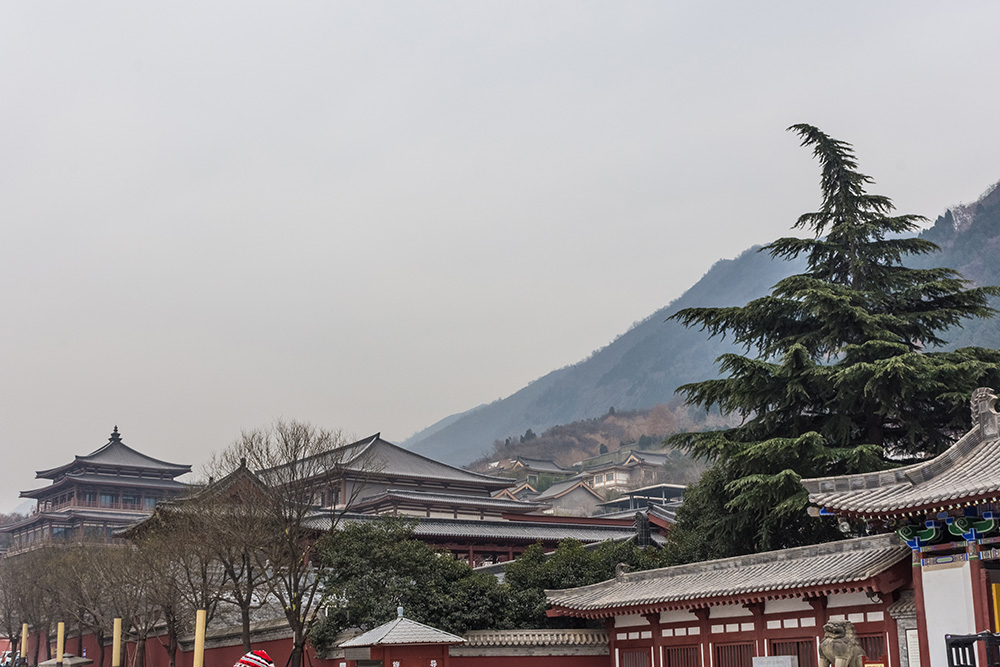 Huaqing Palace is located 30 kilometers east of Xi’an and was built in the Zhenguan era (644) of the Tang dynasty. It was originally named Tangquan Palace, but during Emperor Gaozong’s reign, it was renamed Wenquan Palace. It was finally named Huaqing Palace during the Tianbao era of Emperor Xuanzong’s reign. This name has been used ever since. Since the start of the Zhou dynasty, this has been one of the favorite palaces of the emperors and has been renovated and restored many times. In the Qin, Han, and Sui dynasties, many emperors made a visit to this palace.

Today, Huaqing Palace is renowned both in China and abroad for its rich historical and cultural heritage, and the beautiful scenery of mountains and clear rivers. Domestic and foreign visitors come to the palace in pursuit of the beautiful love story of Emperor Xuanzong and his beloved consort, Yang Guifei, which has been passed down through the ages. Or, they come to see the historical sites left over from the “Xi’an Incident”. Huaqing Palace not only has spectacular scenery, but its various vicissitudes of history have left a treasure trove of cultural heritage for us.

The famous Huaqing Pond was destroyed after the Tang dynasty and was buried under the grounds of Huaqing Palace. In 1982, after the founding of the People’s Republic of China, the site was re-excavated for archaeological research. The Jiulong Pond and the Begonia Pool ruins were rediscovered. They ascertained that Begonia Pool was constructed using green bricks, had an approximately elliptical shape, and had two layers of stone platforms. The fantastic craftmanship, when viewed from above, looks just like a blooming begonia, which is where the name “Begonia Pool” comes from. According to legend, this is the place where Yang Guifei bathed, so it became known as “Guifei Pool”.

After the founding of the People’s Republic of China, Huaqing Palace was fully repaired, protected and expanded. Both the dilapidated palace and Huaqing Pool were opened to the public. 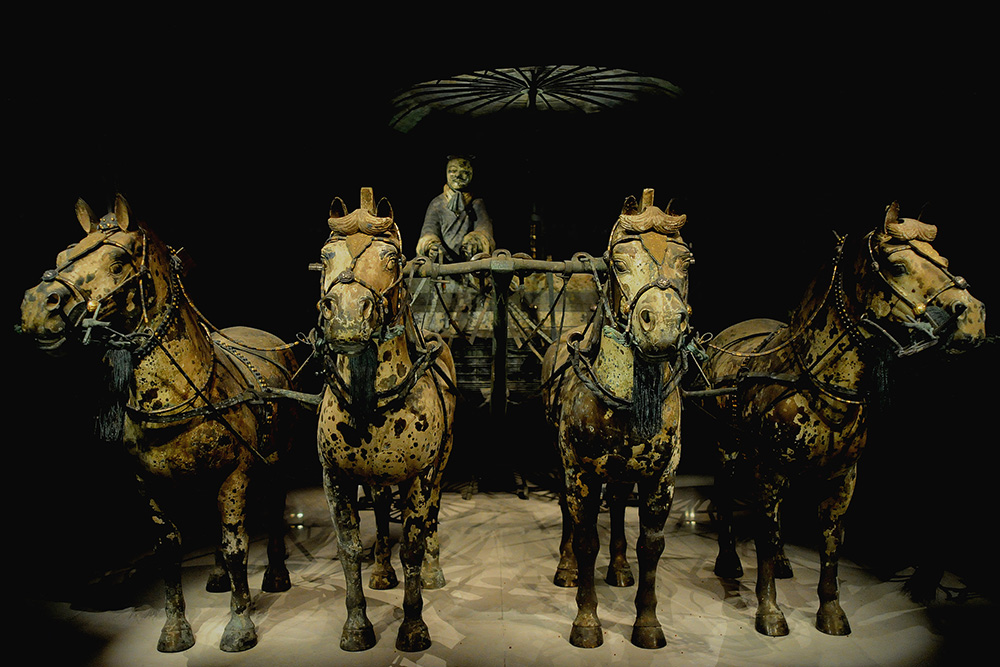 The Terracotta Army was first discovered by a local farmer in 1974 who was attempting to drill wells. After the discovery, the Shaanxi Provincial Archaeological Team began exploring and excavating them. So far, three pits have been excavated. The Chinese term “yong” in the Chinese name for the Terracotta Army “Bingma yong” refers “to the figurines buried with the dead”. The statues of soldiers, chariots and horses are all funerary objects buried for the First Qin Emperor, Qin Shi Huang. In addition to horses and soldiers, the pits also unearthed a lot of weapons and military equipment. It can quite rightly be called the world’s largest underground military museum. 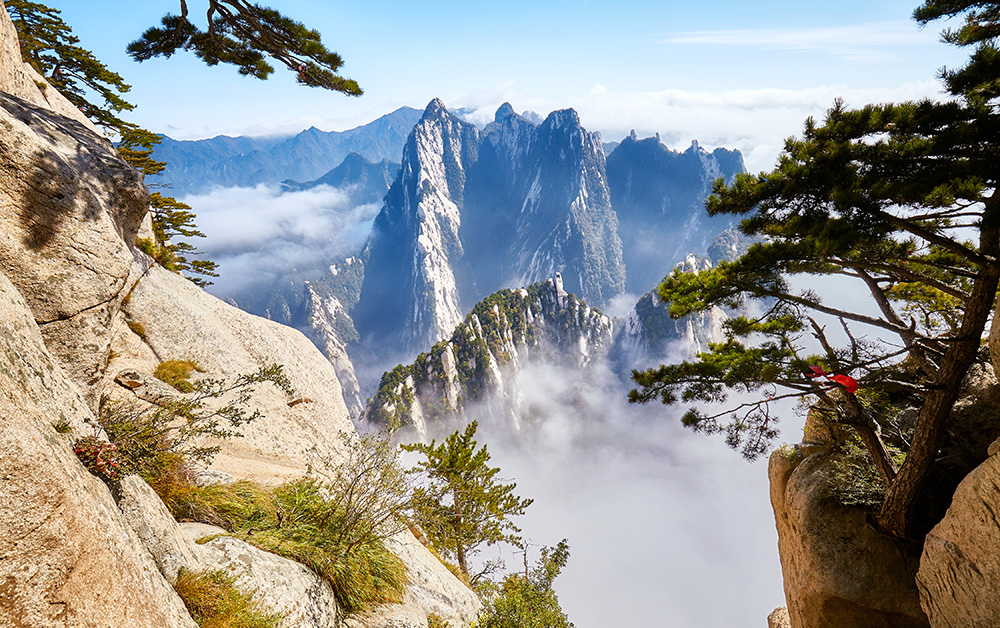 Mount Hua is located in Huayin City, Weinan, Shaanxi Province. It is one of the Five Great Mountains of China. In ancient times, it was called the “Western Mountain” and its more elegant title was “Taihua Mountain” (Great Flower Mountain). After the founding of the People’s Republic of China, Mount Hua was selected as one of the top National Parks of China in 1982, one of the “Top Ten Mountains of China” in 2004, and was rated as a national 5A scenic spot in 2011.

Mount Hua is to the north of the Qinling Mountains and is to the south of the Wei river, the largest tributary of the Yellow River. Mount Hua is steep and precipitous. People of old called it “the most dangerous mountain in the world”. The climbing paths are like ladders ascending to the heavens, and some of the paths are on sides of cliffs, such as Baichi Gorge, “Qianchi Zhuang” and “Laojunli Ditch”. The scenery becomes increasingly stunning as you ascend. There are as many as 200 famous scenic spots on Mount Hua, including the “Sky Path”. Walking along it, visitors will feel like they are stepping onto the air as the mountain breeze whizzes past their ears. It is both pleasant and breathtaking, spectacular, and thrilling. It is also possible to see the so-called immortal handprints on the side of Mount Hua and feel the incredible power of nature.

Mount Hua stands tall and majestic. Many writers and poets have traveled thousands of miles to experience the charm and incomparable beauty of Mount Hua. Since the Sui and Tang dynasties, the number of poems, travel notes, and tablet inscriptions made about Mount Hua has exceeded one thousand, and there are more than one thousand cliff inscriptions left on the walls of Mount Hua. Poets Li Bai and Du Fu both praised the grandeur and precipitousness of Mount Hua. During the Ming and Qing dynasties, Gu Yanwu and other scholars used to live on Mount Hua, studying and teaching in this retreat favored by the literati. The Quanzhen School of Taoism praises Mount Hua as a holy land and calls it the “fourth cave of heaven”. Mount Hua is sprinkled with Taoist temples of all shapes and sizes, such as the East Taoist Temple, the Yuquan Temple, and the key national Taoist temple – Zhenyue Palace.

Mount Hua is not only famed for its spectacular scenery, but it also holds an important place in Chinese traditional culture and is one of the spiritual symbols of the Chinese nation. 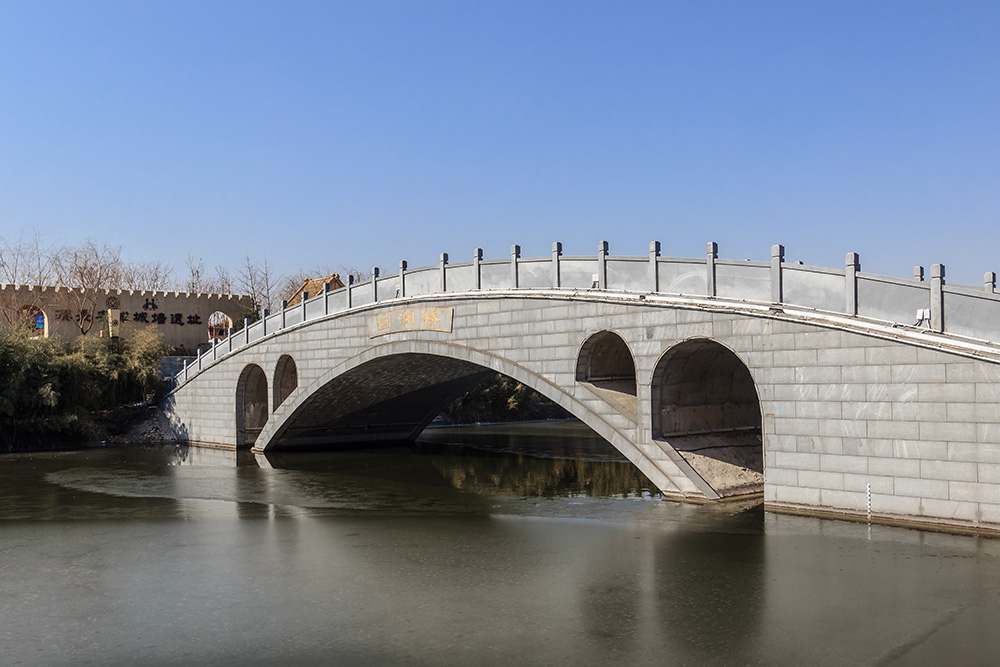 The Han dynasty Chang’an City Relic Site is located in Weiyang District of Xi’an City, Shaanxi Province, with an area of 36 square kilometers enclosed by the city wall. Along with the Jianzhang Palace in Shanglin Yuan, outside of the city wall, the total protected area of the Han dynasty Chang’an City Relic Site reaches 65 square kilometers. It accounts for 60% of the total area of the four major protected sites in Xi’an, making it the largest capital city site in China. Of particular note is that its relics have largely remained intact.

The city wall is 8 meters high. Its base is 16 meters wide, and the total length is nearly 26 kilometers. The walls were all made by stamping earth between board frames, and had a total of 12 gates. The most famous palaces in the city are Changle Palace, Weiyang Palace and Jianzhang Palace. Changle Palace is located in the southeast of Chang’an City, and includes the ruins of Luozhai Site, Fanzhai Site and Jiangwudian Site. Weiyang Palace is in the southwest, including the ruins of Jiaofangdian Site, Qiandian Site, Shaofu Site, Tianlu Pavilion Site, Wucu Site, Shiqu Pavilion Site, and the Weiyang Rammed Earth Site. The Jianzhang Palace, built in the Shanglin Garden outside the city, is still being excavated. Experts speculate that when it is fully excavated, it will be even larger than Weiyang Palace.

In the history of China, Chang’an City was the capital of the greatest number of dynasties and has the longest history. It can be called the center of the formation of Han culture. Chang’an City during the Han dynasty was the most prosperous capital in the world at that time, and it was also the first international city in China. The layout was elegant and functional, reflecting the ingenuity of ancient Chinese people. Ideas and theories were put into practice, while also providing very high artistic and scientific research value in the history of world architecture. A large number of important cultural relics such as building materials, clay figures, currency, and bone labels have been unearthed from the ruins. These precious, historical materials enable us the study the politics, economy, art, and society of the Han Dynasty. 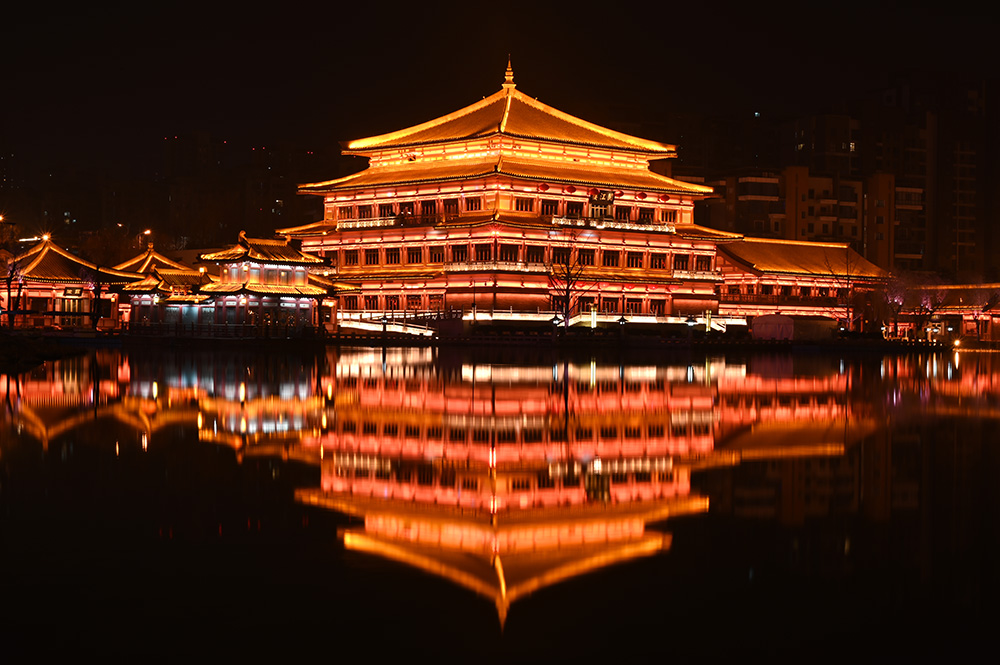 Tang Paradise is located in the south of Xi’an City, Shaanxi Province. Close to the Giant Wild Goose Pagoda, Tang Paradise is the first large-scale royal garden-style cultural scenic spot in China, covering an area of over 1,000 acres. At the start of 2011, it was rated as a national 5A scenic spot. In 2018, Tang Paradise and the Terracotta Army in Shaanxi, the Dunhuang Mogao Caves in Gansu, and the Chaka Salt Lake in Qinghai, among other scenic spots, were selected as one of the “100 Most Magical Scenic Spots in Northwest China”.

The Tang Paradise of the Tang dynasty was destroyed as the dynasties changed, leaving virtually no remains of the original. According to documentary records, to prevent the site from being turned into a commercial area, the government began recreating the Tang dynasty royal garden in its original style in 2002. It was completed in 2004 and officially opened in 2005. It demonstrates the glory of the Tang dynasty to domestic and foreign tourists.

The overall planning and design of Tang Paradise was done by the Zhang Jinqiu from the Chinese Academy of Engineering. It is divided into 14 distinct areas, including the imperial culture area, diplomatic culture area, women’s culture area, folk culture area, and the Buddhist culture area, all of which hold specific performances. In addition, there are also many ancient buildings, such as the Ladies’ Hall, the Royal Banqueting Hall, and the Apricot Garden. This imitation of Tang dynasty imperial complexes is the largest in China and resurrects the culture and prosperity of the heyday of the Tang dynasty .