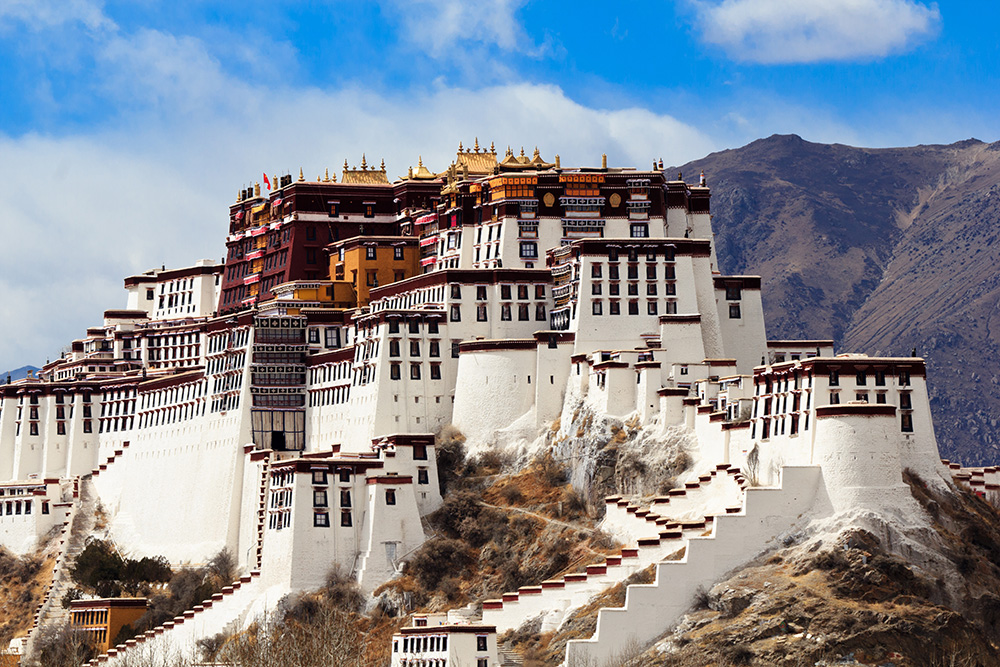 The Potala Palace, is located on the Red Mountain at an altitude of 3,700 meters. It is in the center of Lhasa in the Tibet Autonomous Region. It has become a world-famous landmark known for its Tibetan aesthetics, reflected in the building’s appearance, and its value for the study of Tibetan history, culture, and religion.

According to historical records, in the 1630s, the 33rd generation of the Tubo dynasty, Songtsen Gampo moved to Lhasa, and the Potala Palace was built as the royal palace. The scale of the palace at that time was grandiose, with three walls separating it from the outside and a thousand chambers inside. Here, Songtsen Gampo divided the administrative regions, assigned officers, launched legislative laws, gave orders to the officials and governed the entirety of Tibet. He also built relationships with neighboring countries by arranging marriages and signing various agreements. As a result, the Potala Palace has been considered the political center of the Tubo dynasty as all actions taken by Songtsen Gampo to strengthen the economy and cultural exchange of Tibet with neighboring ethnic groups were carried out here. Its status was very prominent.

After more than 1300 years of history, the Potala Palace has become a grand palace with an area of 400,000 square meters and a constructed area of 130,000 square meters. The main building of the Red Palace is 115.703 meters high. It is multi-functional, with facilities such as palace halls, pagodas, main halls, Buddhist halls, scripture halls, offices of important official departments, former official schools, dormitories, courtyards, corridors and more. Inside the palace, eight special golden pagodas of the Dalai Lama, five exquisite three-dimensional mandalas, items made from gold, silver and bronze, other pagodas, thangka (Tibetan Buddhist paintings), clothing and more amounting to over 70,000 cultural relics. Moreover, books and more than 60,000 written documents are also kept there. These historical treasures have attracted the attention of people all over the world. The Potala Palace is also known as the Pearl of the Plateau.

Ticket sales and admission start at 9:30 am 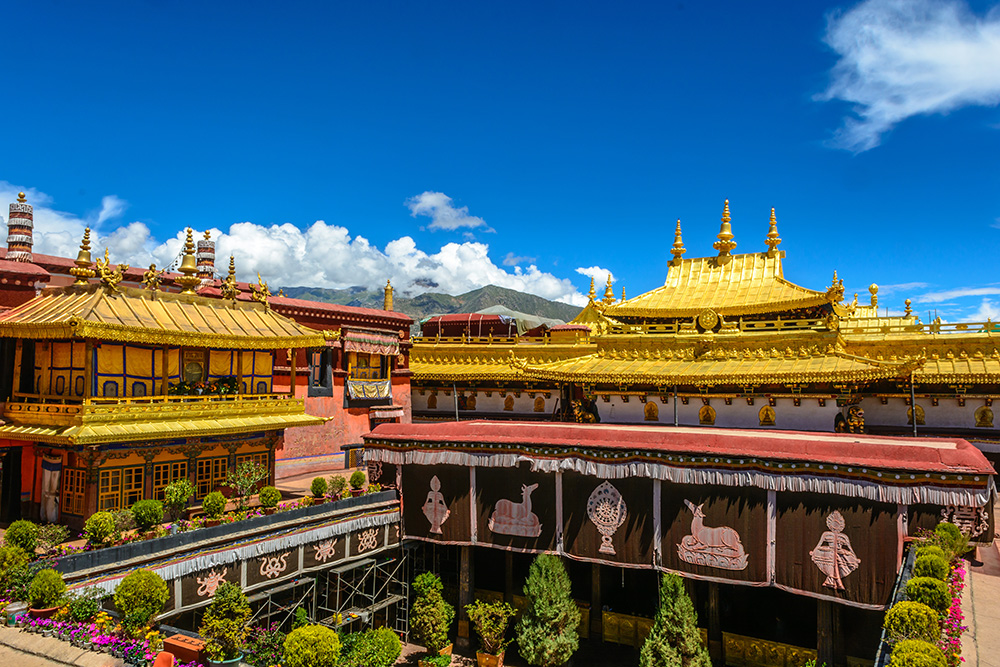 The Jokhang Temple has more than 1,300 years of history and it holds the highest position in the hierarchy of Tibetan Buddhism. The Jokhang Temple is the most splendid surviving building from the Tubo period in Tibet. It is also the earliest civil structure building in Tibet. It was created in the Tibetan Pingchuan style of temple city planning.

The Jokhang Temple combines Tibetan, Tang, Nepalese, and Indian architectural styles, making it an ancient model of Tibetan religious architecture. The smell of incense lit by faithful devotees lingers around the temple from day to night. Devout worshippers visiting over time have left deep imprints along the floor by the bluestone door.

The Jokhang Temple is 4 stories high, and the golden roofs and brackets are in the typical Han style. The Diaolou (watchtowers), have carved beams in the Tibetan style. In the main hall, 103 wooden carvings of mythical animals and lions with human faces are arranged on the second and the third eaves, showing characteristics from Nepal and India. There are Tibetan frescoes that nearly 1,000 meters long depicting “Princess Wencheng’s Journey to Tibet” and “The Construction of Jokhang Temple”. There are also two Ming dynasty embroidered Thangka (Tibetan Buddhist paintings), which are incredibly rare treasures. 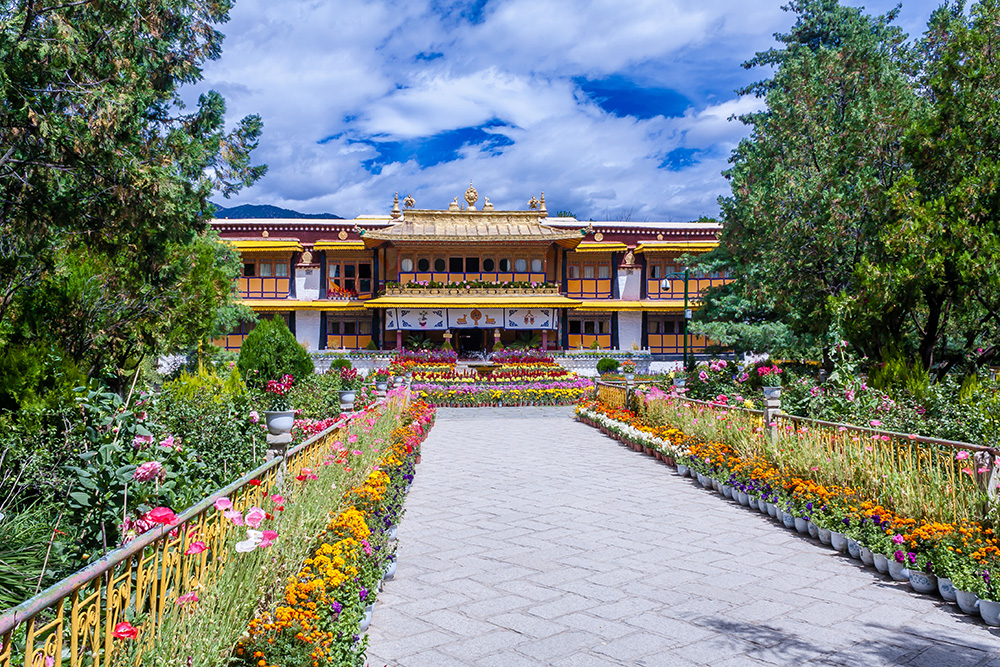 Norbulingka is a key national cultural relic, located in the western suburbs of Lhasa, Tibet. First built in the 1840s, it was the place where successive Dalai Lamas spent their summers and governed the country. It has a typical Tibetan style garden. After 200 years of expansion, the garden now covers an area of 360,000 square meters. There are more than 100 species of plants in the garden, including not only the common flowers and trees of Lhasa, but also exotic flowers and plants from the Northern and Southern foothills of the Himalayas, and rare and precious flowers imported from the mainland and abroad. The garden is known as the botanical garden on the plateau.

Kelsang Phodrong, Golden Phodrong and Tsokyil Phodrong are considered the main structures of Norbulingka. With 374 rooms, it is the largest, most scenic, and most historically valuable man-made gardens in Tibet. Norbulingka means treasure garden.

Norbulinka has doors on all four sides, with the main gate situated on the East. A conspicuous wooden structure is located at the front. It was originally a small wooden pavilion in the Han style, but it was later converted into a theater building. To the East, is an open space for performances conveniently placed for the Dalai Lama to watch plays. Next to it, it is the “Xia Pu Dian La Can”, a place for religious rites.

Before liberation, Norbulingka was just a “Summer Palace” for the Dalai Lama and a few high-ranking officials to enjoy and rest. After liberation, Norbulingka has been restored and renovated. Inside, there are 49 species of pine and cypress trees, 62 species of famous flowers and herbs such as mountain peonies and Chinese peonies, as well as 15 species of birds and animals. In the garden, there are well-manicured garden lawns, exquisite and unique pavilions, waterside pavilions, and also a stage for performances, wooden tables, and stools.

Tibetan opera performance at 11 am 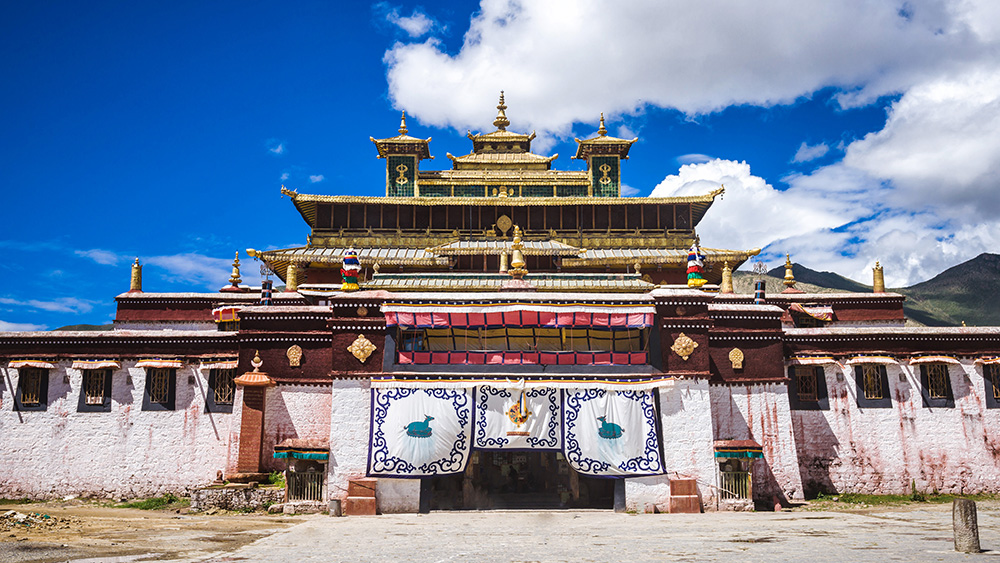 Samye Monastery, also known as the Temple of Existence or the Boundless Temple, in Samye Town, Zhanang County, Shannan Prefecture, Tibet Autonomous Region. It is situated at the foot of Mount Habu on the North bank of the Yarlung Zangbo River.

Samye Monastery was built during the Tubo Dynasty in the 8th century and it was the first monastery in Tibet to allow lay people to become monks. Temple buildings were designed according to Buddhist cosmology. The central Buddhist temple shows Tibetan, Han, and Indian style architecture, so Samye Monastery is also known as the Three-Style Monastery. The whole of Samye Monastery faces the Southern side. The plane of the temple is elliptical, arranged according to the world structure in the Buddhist Sutra. It is like a long courtyard, covering an area of about 25,000 square meters. The design of Samye Monastery is inspired by the Odantapuri Temple, built by the ancient Gopala civilization in Magadha. Although it has been rebuilt many times due to fires in later generations, the architectural pattern has been kept in the original style. The layout of the temple is designed in accordance to Buddhist scriptures of the “Great Thousand Worlds” and the tantric mandala. Wuzi Hall represents the center of the universe – Sumeru Mountain. There are four halls surrounding the main Wuzi hall which represent the four oceans. There is also a Sun and Moon hall symbolizing the sun and the moon of the universe. The temple walls symbolize the Tiewei Mountains which surround the universe. Around the main hall, four pagodas were built with the colors red, white, green, and black to subdue evil spirits and prevent natural and man-made disasters. There are gates on each side of the fence, with the east gate as the main gate.

Location: at the foot of Mount Habu on the North bank of the Yarlung Zangbo River

The Yarlung Zangbo Grand Canyon is the deepest canyon on Earth with a total length of 504.6 kilometers, a maximum depth of 6,009 meters and an average depth of 2,268 meters. It is undisputedly the largest Grand Canyon in the world. It is far larger than the world’s second largest Canyon.the Palon Zangbo Canyon, the Grand Canyon of Colorado in the United States (2,133 meters deep and 370 kilometers long) and Peru’s Colca Canyon (3,203 meters deep and 90 kilometers long). Some of the main waterfalls are located between 30 and 50 meters. Their basic characteristics can be summed up in ten words: high, strong, deep, smooth, secluded, long, dangerous, low, strange, beautiful.

The canyon has nine vertical natural environments, from high mountains to snow belts and tropical rainforests in the low valleys. The area holds incredible biodiversity, including two-thirds of the known plant species that grow on the higher parts of the Qinghai-Tibet Plateau, half of the known mammals, four-fifths of the known insects, and three-fifths of the known large fungi in China.

As the mountain barrier between the Qinghai-Tibet Plateau and the Indian Ocean, it intercepts and transports water vapor to the interior of the plateau turning some places in Tibet lush and green. An American president once said that a person who has not been to the Grand Canyon has not been to the United States. We can proudly say that without seeing the Yarlung Zangbo Grand Canyon, one cannot claim to have seen the most magnificent mountain and river in the world!