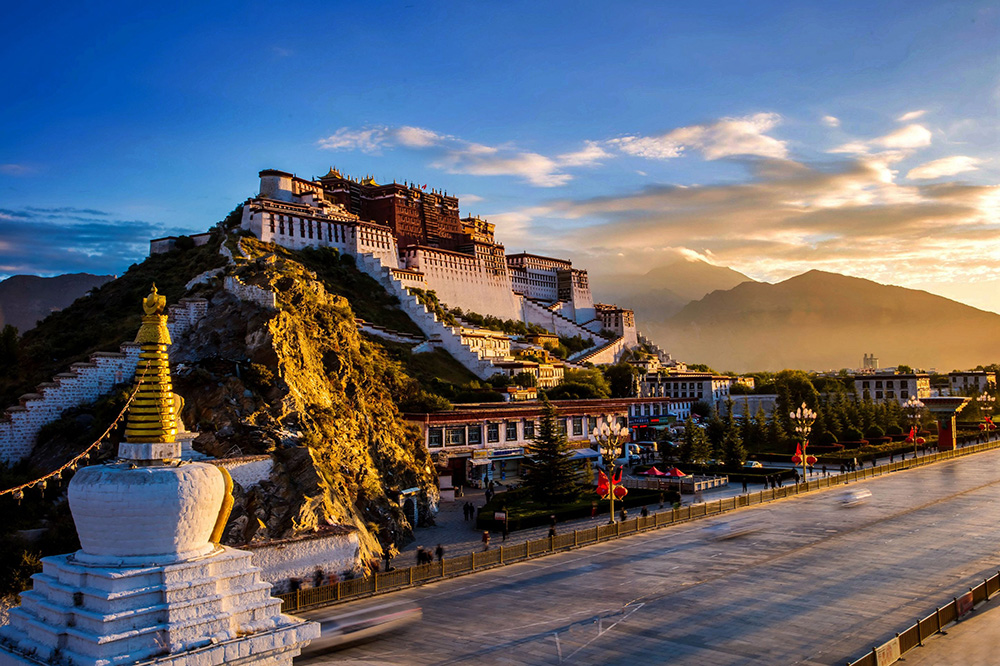 Lhasa is located to the north of the Himalayas, in the central region of the Tibetan Plateau. It is the capital of the Tibet Autonomous Region, with a population of about 560,000. As many as 31 ethnic groups, including Tibetans, Han, and Hui, live here, with the majority being Tibetan (as much as 87 percent). Lhasa is 3650 meters above sea level, and receives plenty of sunshine. It is sunny almost all year round, meaning it gets more than 3000 hours of sunshine each year. Consequently, it has the been given the name “Sunlight City”.

Lhasa has many places of interest; Potala Palace, Jokhang Temple, and Norbulingka, all on the World Heritage List, are famous both in China and abroad. There are also many other temples with unique characteristics. Moreover, the Valley of the Kings (Chongye Valley) and the Qoigung Ruins are similarly worth visiting. In various districts and counties near Lhasa, unique geothermal hot springs can be found. The famous ones are the Qusang Hot Springs in Doilungdêqên District, the Yangbajing Hot Springs in Damxung County, and the Dezhong Hot Springs in Maizhokunggar County, known as “the world’s best hot springs”. Bathing in bubbling hot springs with a backdrop of the snow-capped mountains of the Tibetan Plateau will without a doubt be a pleasant experience. Furthermore, the water of the hot springs contain many minerals which have healing effects upon the human body. The Yangbajing Hot Springs are rich in hydrogen sulfide and can provide a therapeutic role for many chronic diseases. These hot springs also have an economic value; Yangbajing Geothermal Power Station is powered by the Yangbajing Hot Springs, and has the highest elevation among the world’s geothermal power stations.

In terms of the cultural environment, Lhasa has beautiful scenery, a long history, unique and straightforward customs, and a strong religious atmosphere. Lhasa was one of the cities listed in the first batch of “National Famous Historical and Cultural Cities” in China and has a huge international. It has been commended as one of the world’s top 200 beautiful cities, and is  the most popular city for European tourists. 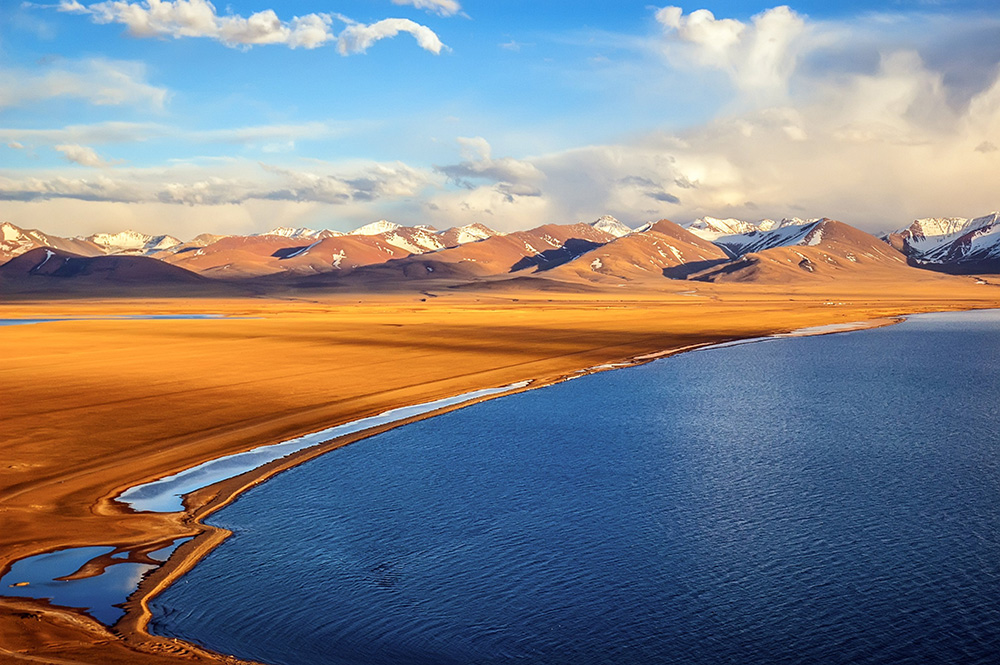 Namtso (Lake Nam) is located on the Qinghai-Tibet Plateau. It is the third largest saltwater lake in China in terms of area and is 4,718 meters above sea level, making it the world’s highest lake. The lake is roughly in the shape of a rectangle, wide in the west and narrow in the east. Its length is roughly 70 km and its width 30 km, and covers about 1,920 square kilometers. According to the latest scientific measurements, data regarding Namtso’s maximum depth increased from 33 meters to more than 120 meters, meaning the lake accommodates some 768 billion cubic meters of water. Namtso, along with Lake Manasarovar and Yamdrok, are listed as Tibet’s three holy lakes. Namtso is the lake’s Tibetan name, whereas in Mongolian, it is known as Tengri Nor. Both names mean “Heavenly Lake”.

Looking north from Namtso, one sees the rolling hills of the plateau. Looking south, one sees the snow-covered Nyenchen Tanglha Mountains which rise from the south towards the north stretching from east to west. The whole mountain range is about 5500 meters to 6000 meters above sea level, and the main peak is as high as 7000 meters above sea level, pointing straight towards the heavens with majesty. Namtso, like a vast mirror inlaid upon the fertile grassland of the plateau, reflects the boundless sky.

Namtso’s summers are vibrant, but because of its high altitude, freezing weather sets in as early as October. As the winter deepens, the ice across the lake grows thicker and thicker until May the following year. When the thick ice finally cracks, the loud noise can be heard from miles away, echoing around this serene land. 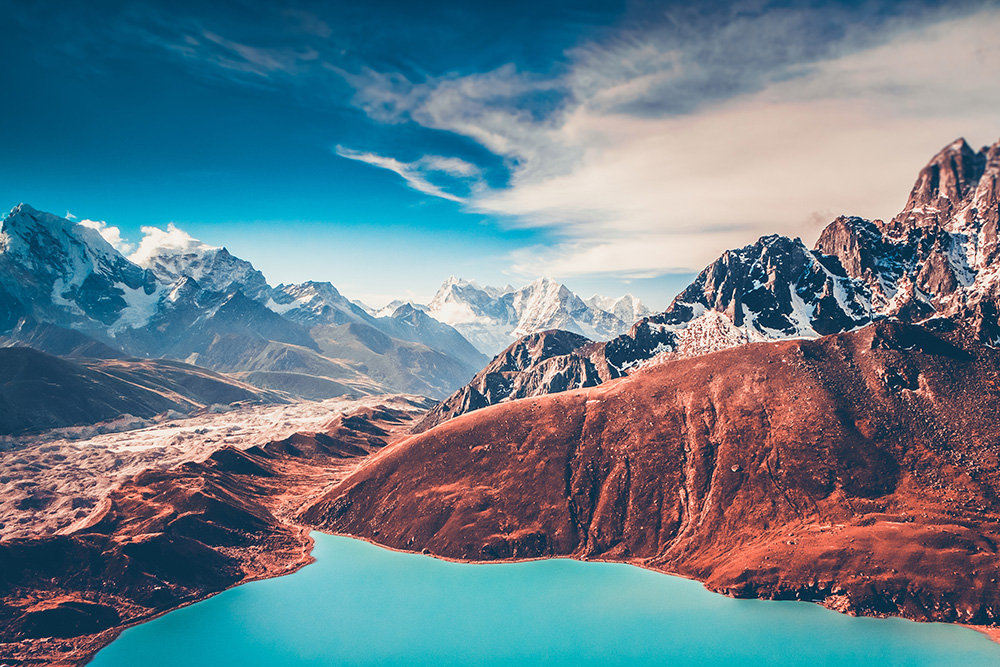 The highest mountain range on earth, and with the tallest peaks in the world, the Himalayas stands loftily on the “roof of the world”. They are to the south of the Qinghai-Tibet Plateau. Namcha Barwa is its easternmost anchor. Nanga Parbat is its westernmost anchor. The entire mountain range is about 2450 km long and between 200 km and 350 km wide. This behemoth lies between the East Asian continent and the South Asian subcontinent, and separates China, India, Pakistan, and Nepal. The numerous peaks reach high up into the sky. The most famous peak is Mount Everest, with an altitude of 8,844.43 meters, the world’s highest.

Qomolangma, the Tibetan name for Mount Everest, means “Snow Mountain Goddess”. The whole appearance of the goddess is white, and she stands at the very top of the world, looking over and blessing those who do good. At other times, she appears in the blue sky, or among the white clouds. The charm of Mount Everest is like the mysterious, beautiful, and sacred image of the goddess, attracting an endless stream of climbers to navigate the most magnificent mountain on earth.

Geological scientific research shows that some 2 billion years ago, the area where the Himalayas are now situated was a vast sea. From then on until 30 million years ago, the region saw a downward movement of the earth’s crust, and the ocean basin accumulated 3000 meters of marine sedimentary rock. There was then a geologic event called the “Himalayan Movement” where the crust gradually moved upwards. During the Quaternary glaciation period, the crust of this area rose to a height of between 1300 meters and 1500 meters. These movements created the world’s tallest mountains, and geological studies show that the earth’s crust in this area continues to rise even to this day.

A lush virgin forest is flanked by two stately ice waterfalls that meet and collide to form the beautiful Midui Glacier. Glittering and translucent ice crystal cliffs stand before you when you look upstream of the Midui Glacier. One glance can make you quake. The landscape suddenly shifts from the cold, silvery ice of the glacier to the sprawling, tender, green leaves of a subtropical, evergreen forest when you look downstream. You feel as if you’ve stepped into a magical wonderland. Looking around, there are the flowering plants, the snow-capped mountains, the undulating forest canopy, the winding dragon of ice. In one glance, all four seasons can be seen: summer and winter, a green oasis and a white blanket. Man and nature are merged in this scenery which is so spectacular that it is beyond human imagination.

Geographically, the Midui Glacier, with its almost 800-meter-high ice waterfall, is one of the rarest glacial wonders in the world. The Midui Glacier is one of only two glaciers in China that show the rare phenomenon of “glacial pulsing”. Midui Glacier starts on a snow-capped mountain about 6,000 meters above sea level. The mountain has two huge depressions, creating a formation that looks like two sunken walls. Since three sides rise up and one is fallen, the two depressions look like two chairs from a distance. All three walls are thickly covered with snow and ice. Excess snow often triggers frequent avalanches, and the ice and snow that fall on the glacier furthers its growth. If too much snow and ice accumulate in the snow-capped mountains’ depressions, they will form a spectacular ice waterfall reaching up to 800 meters high. The ice waterfall crashes into the opening of the depression and plunge into the ice basin of the Midui River. Such a spectacular scene is a rare spectacle, and people who have seen it never fail to be impressed by nature’s marvelous work. 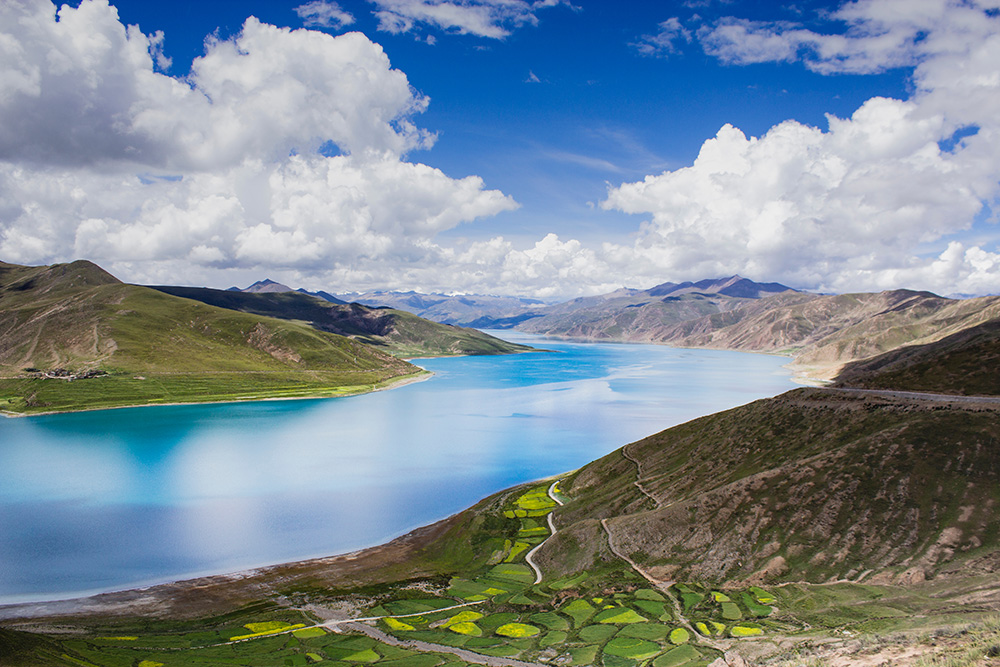 Yamdrok Lake is located in Nagarzê County, Shannan City, Tibet Autonomous Region, south of the Yarlung Tsangpo River and north of the Himalayas. It is about 70 kilometers southwest of Lhasa, with an elevation of 4441 meters and has an area of 675 square kilometers, making it the largest lake in the northern foothills of the Himalayas. In Tibetan, “Yamdrok Yumtso” means “Jasper Lake”, which is a very fitting name. The scenery surrounding it is exceptional, and the lake is like a mirror with water a most amazing shade of blue. The intensity of the blue changes with the amount and intensity of sunlight as well as the angle of illumination. The distant snow-capped mountains of the plateau and Yamdrok Lake gaze at one another. Mountains are seen in the lake, and lakes in the mountains, as is typical of the spectacular scenery in southern Tibet. Yamdrok Lake is listed as one of the “three holy lakes” in Tibet, along with Namtso and Lake Manasarovar. It is a holy place in the hearts and minds of the Tibetan people.

About 100 million years ago, glacial mudslides blocked the river course, forming an irregular, multi-forked barrier lake on the plateau. This was the origin of Yamdrok Lake. At first, the water of the lake merged with the Yarlung Tsangpo River, but when the water level fell, Yamdrok Lake was formed, along with several other small lakes. The most famous three are Zhen Co, Bajiu Co, and Kongmu Co. The heights of each lake are all very similar; the maximum difference is not more than 6.5 meters. The Tibetan people praise Yamdrok Lake as the most beautiful lake in the world. On the banks of the lake, no matter from what angle, it is difficult to see the whole view of Yamdrok Lake, but from a height, one suddenly discovers that it looks like a magnificent and beautiful ear pendant that quietly hangs upon the ears of the mountains. One cannot help but sigh to see the magnificence and magic of nature. Kongmu Co, Zhen Co, Bajiu Tso, and Yamdrok Lake, like four sisters, depend on one another and are inseparable. Together they form a vast and boundless holy lake.