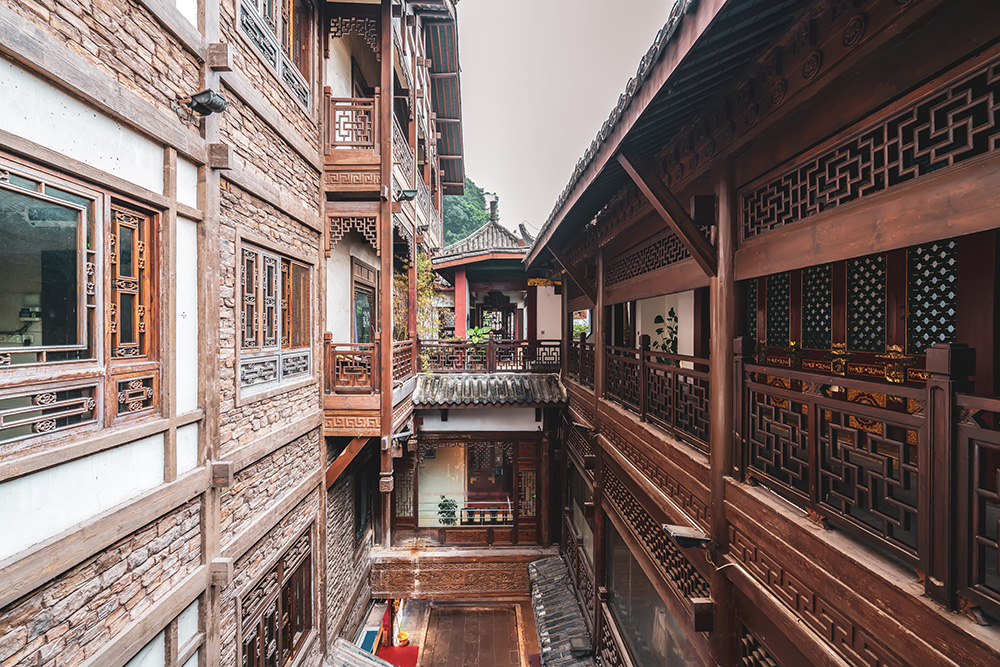 Hongyadong Folk Custom Scenic Area is located along the Jialing River in Yuzhong District of Chongqing. It was once one of the city-gates of ancient Chongqing. After the government invested hundreds of millions of dollars in its design and renovation, Hongyadong Folk Custom Scenic Area developed into a national tourist site, rated at the second highest level of 4A, according to the Tourist Attraction Rating categories of China. It features traditional Bayu architecture with stilted buildings and commercial streets in a folk style.

Hongyadong is divided into 11 floors and consists of four streets, including the Dynamic Bar Street, Bayu Style Street, Feast Food Street and Exotic Street. The Bayu Style Street, located on the ground floor of Tiancheng Lane, is designed to recreate the classic blue brick red tile houses that were prevalent 2300 years ago. The Feast Food street on the 4th floor integrates traditional and modern Sichuan and Chongqing cuisine that visitors are sure to appreciate. The Dynamic Bar street on the fifth floor is home to bars from more than 30 countries and regions around the world, providing a social place for young people to make friends and entertain. The Exotic Street, located on the 9th and 10th floors has restaurants and cafes for visitors to try delicious food while enjoying the riverside view

The “Sky Pedestrian Street” is famous for being like a real-life scene from “Spirited Away” with its “Stilted Buildings on Cliffs”. Hongyadong has become Chongqing’s calling card. Numerous travelers have traveled thousands of miles to this mountain city just to see its beauty and mysterious customs. Its unique folk architecture and night lighting charm all those who visit.

Ciqikou Ancient Town, located in Shapingba District, Chongqing, appeared in the Song dynasty and was originally named Longyin Town. With its superior geographical position on the Jialing River, and its natural harbor, Ciqikou has become a well-known land and water terminal on the Jialing River. It is the most important docking area for water traffic and freight. In the daytime, the area is full of pedestrians and cargo, with endless comings and goings on the dock. After nightfall, the river surface is illuminated by thousands of lights. This ancient town is vibrant and full of life.

In the Ciqikou, a stone road runs through witnessing the endless flow of pedestrians and horses. In addition to the busy traffic, Ciqikou Ancient Town is a place where the snacks of Sichuan and Chongqing could be found. On either side of the street, people sell produce such as sweets, traditional figurines made from glutinous rice powder and other folk handicrafts. From time to time, Sichuan opera and other traditional performing arts can be seen here too.

Each year, Ciqikou Ancient Town focuses on traditional festivals and strives to explore the rich local culture to discover more about folk culture and history; Spring Festival couplet writing sessions are held during the Lunar New Year, cultural exchange activities are held during the Ching Ming Tomb-Sweeping Festival, visitors are invited to enjoy Sichuan’s “face-changing” Bian lian Opera and taste tea, and The Dragon Boat Festival is celebrated by making rice dumplings and drinking rice wine with members of the public. In addition, there are various colorful activities for the Mid-Autumn Festival, National Day, Chong Yang Double Ninth Festival and so on.

Ciqikou Ancient Town is also working to develop and honor its own unique culture and history, such as the Bayu culture, the history of fighting against Japanese invaders, the culture of Ciqikou and Shapingba, and its revolutionary history. The local area uses these aspects to inform their work to promote the heritage of Ciqikou and present Ciqikou as a miniature version of Chongqing, to both domestic and international visitors.

Chongqing Wulong Karst National Geopark, is located along the Wujiang River, a tributary of the Yangtze River. Following it as it runs along the river’s lower reaches, you can find a wonderland created by nature. In 2004, the Ministry of Land and Resources approved the establishment of the third group of national geoparks, among which was the Wulong Karst National Geopark.

Wulong Karst Geopark is famous for the karst landforms which give it its name. There are two major parks within it: Tiansheng Sanqiao Geopark Park and Furong Cave and River Geopark. Within the park, there are scenic spots wherever you look, covering a wide range of landforms. Among its scenic spots, the most famous are the four geological wonders: the Furong Cave, is a huge karst cave, which is a rare treasure among the cave landscapes in the world today, it is covered with stalactites with different shapes; The Three Natural Bridges of World Wonder, visitors standing under the bridge can look up to the huge stone bridge across the sky and feel how truly magnificent nature is; the Wulong Zhongshi Courtyard surrounded by mountains and cliffs; and the Wulong Star Cave Group which is very steep, visitors can feel like they are sitting in a well looking up at the sky.

In addition, the beautiful and magnificent Bayu landscape is also a treasure to linger on. The park sits on the Furong River and is comparable with the Jiuzhaigou Valley and Longshui Gorge with its steep cliffs and waterfalls. Fairy Mountain possesses an incredible amount of biodiversity and is valuable as a biological gene bank.

The park is full of beautiful and magical scenery, which can be overwhelming. Visitors often praise the magnificence of this geopark, it is definitely worth a visit for those who love nature. 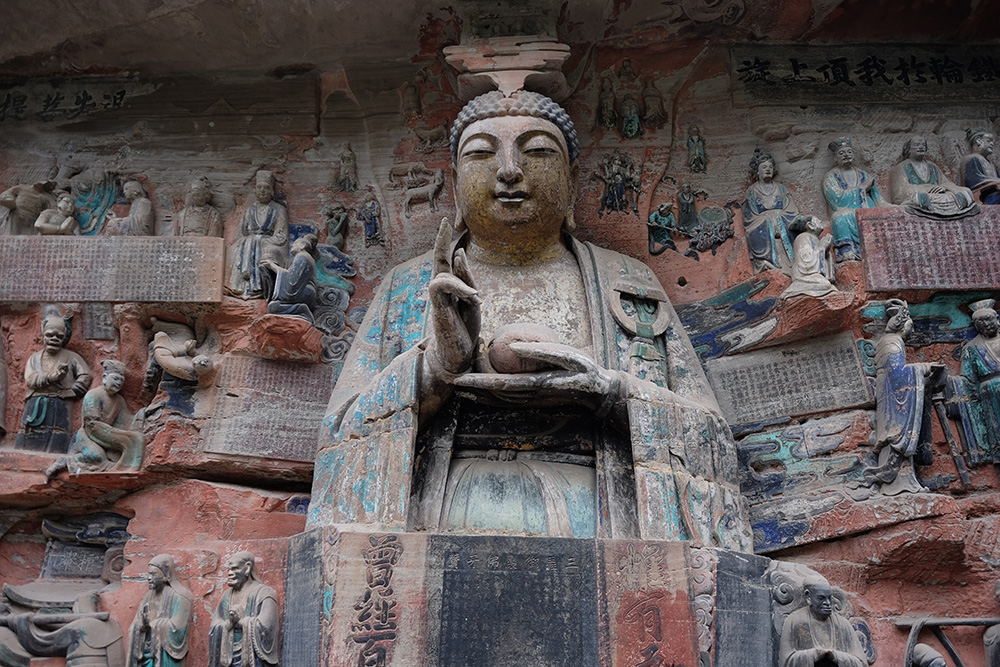 The Dazu Rock Carvings are located in Dazu District, west of Chongqing, near the Sichuan-Chongqing border. It is one of eight major Buddhist Rock Carvings in the world, and is on par with the Mogao Caves and Longmen Grottoes. The Dazu rock carvings were added to UNESCO’s World Heritage List in 1999 and were highly praised by the committee.

The Dazu Rock Carvings were carved in the early period of the Tang dynasty but work on the carvings continued throughout the Song dynasty, and even the Ming and Qing dynasties. It is home to more than 100,000 statues related to Confucianism, Buddhism, and Taoism, and shows the development and change in the art style of Chinese grottoes from the Tang to the Song dynasty. Its style is most representative of the late period of Chinese grottoes and it has unique artistic, historical, and scientific research value.

The Dazu Rock Carvings are exquisitely carved. Its three-dimensional figures use both realism and exaggeration to express vivid emotions. The content and themes of the rock carvings are rich and relevant to life. Through the strong contrast between good and evil, beauty and ugliness, the rock carvings played a role in social education and has strong artistic appeal at the same time.

The Dazu Rock Carvings have now been awarded 5A, the highest possible rating according to the Tourist Attraction Rating categories of China. It is also a designated national key cultural relic protection site. In 2016, it was selected as one of the top ten cultural symbols of Chongqing together with the Three Gorges of the Yangtze River, the People’s Auditorium, and Chongqing Hotpot. In 2020, it was recognized as a new landmark in the Bashu Cultural Tourism Corridor together with Dujiangyan Irrigation System, Qingcheng Mountain, Jinsha Ruins, Wulong Mountain and other scenic spots. 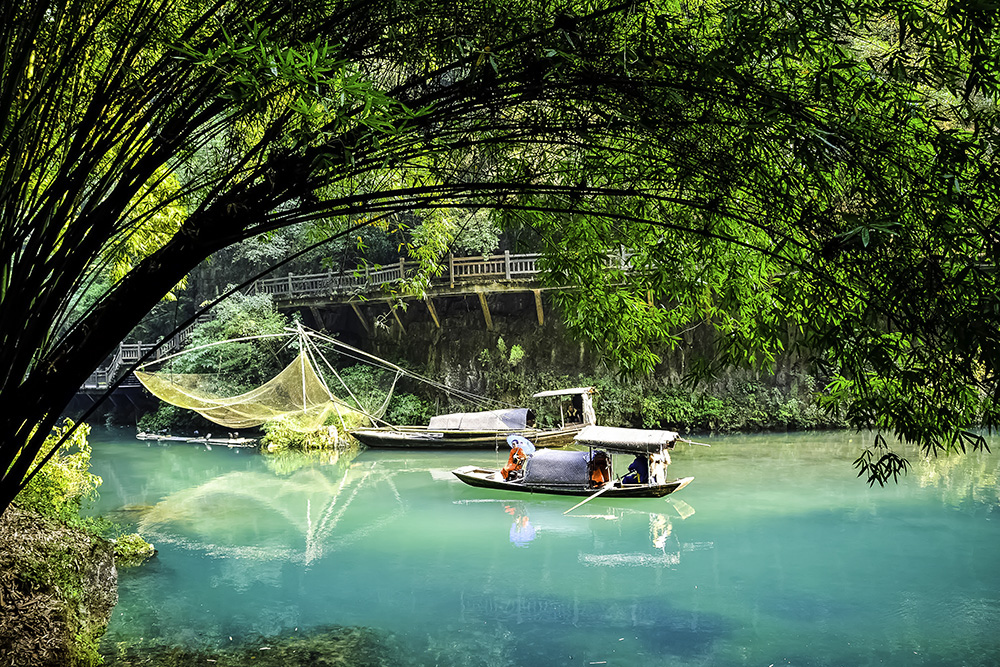 Wushan’s Small Three Gorges is a national key scenic area, not far from the Yangtze River Three Gorges Scenic Area. The Small Three Gorges refers to the Bawu Gorge, Dicui Gorge and Longmen Gorge. The entire Small Three Gorges is only about 50 kilometers long. It has a subtropical climate, with a mild winter, hot summers, and concentrated and abundant rainfall. Each season has a distinct climate. However, due to the deep twists and turns of the canyon, the days can be very short because of limited direct sunlight. The gorges are quiet with the mountains rising high above and a fast river under it. Clouds and mists often rise, coiling in the mountains and forests and adding a sense of tranquility. The Small Three Gorges are often praised for their majestic mountains, beautiful rivers, steep beaches and wonderfully strange rocks.

The Wushan Small Three Gorges is quiet but also full of life with its clear waterfalls, springs and lush forests in the mountains, just like an exquisite plant. Fish are abundant in the turquoise water, monkeys swing and play on the trees in the quiet forest, birds fly down into the forest from the sky. The Small Three Gorges of Wushan Mountain can be seen as nature’s own zoo.

In addition to these beautiful natural landscapes, there is also the mysterious and intriguing culture of the Ba people, with their hanging coffins and boat coffins and even the ruins of ancient villages in the gorge. These landscapes are not only mysterious and spectacular but are precious because of the historical relics left by our ancestors. Some people praise the Small Three Gorges as “not the Three Gorges, but better “. The Small Three Gorges are quiet and beautiful without losing any of its magnificence. Visitors are welcome to come visit and enjoy its scenery.