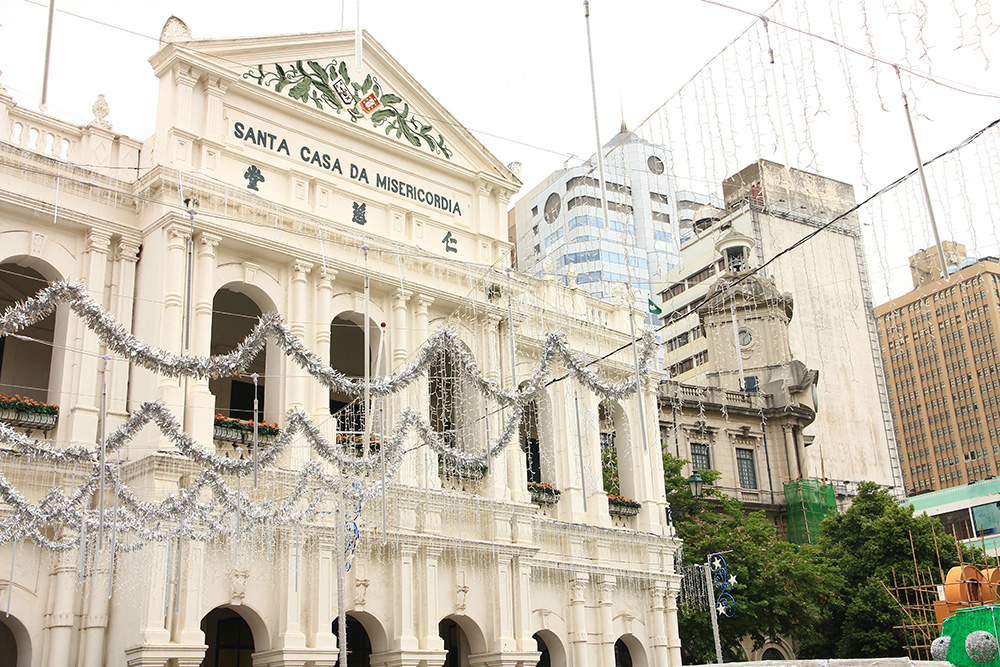 The Leal Senado Building is located on Avenida Almeida Ribeiro, Macau. It was built in 1784 as the first city hall in Macau. It is now the Civil and Municipal Affairs Bureau. Due to Macau’s refusal to pledge allegiance to the King of Spain during the Iberian Union in 1654, King João IV of Portugal bestowed Macau the title of “unparalleled loyalty” (Leal) and the Macau City Hall was named after it.

The building has been through many reconstructions, nevertheless, it still maintains its original layout in a neoclassical style. The white exterior walls, dark green doors and windows, and the facades are divided by granite moldings. They are simple yet solemn. The interior walls are decorated in the traditional Portuguese-style with blue and white tiles, which is a prominent Portuguese feature.

There is an arch in the middle of the hall, leading to a staircase to the second floor, and there is another arch leading to the garden behind the building. The garden is lush and delicate with the statue of a famous Portuguese poet – Camoes. The design of the garden is of typical Macau style, that is, a merge of traditional Chinese and Portuguese style.

The stone staircase leads to the second floor where there is a lobby, a library, and a chapel. The library was opened in 1929 and its design is based on the Portuguese Mafra Monastery’s library. The wooden carvings are exquisitely made in a classical style. It now stores ancient foreign language books from the 17th century, which are very valuable. The chapel, which was established in 1940, houses the statue of the Immaculate Conception and the icon of Saint John the Baptist, the patron saint of Macau. Mass and prayers can also be held here.

The Leal Senado Building is usually filled with beautiful festive decorations to celebrate important festivals, especially during Christmas and Chinese New Year. They usually attract many residents and tourists alike to visit.

Gallery: 9 am – 9 pm (open on public holidays and closed on Monday) 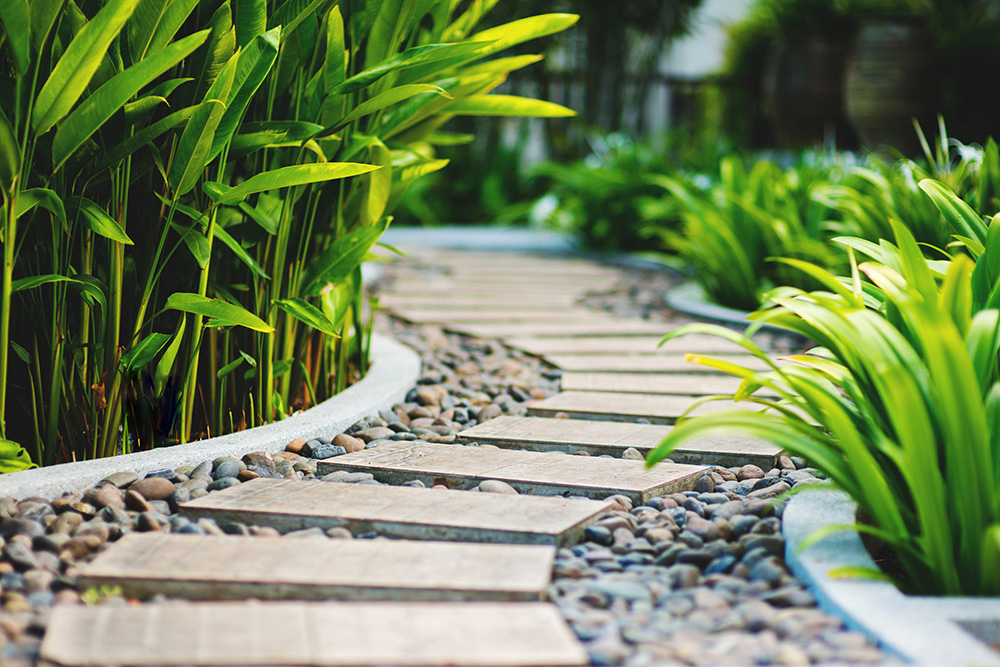 Lou Lim Ioc Garden is located in the centre of Macau, on the Estr. de Adolfo Loureiro. The garden, which was built by a Chinese businessman, shares some resemblance with the Suzhou-Hangzhou gardens. Lou Lim Ioc Garden is a unique corner and a world full of imagination. It is intoxicating to stroll in this garden which is just like an escape that leaves all the noises and problems of the real world behind. It is the most traditional Chinese garden in Macau. The winding paths in the park are quiet and peaceful, and you will see hanging spring waterfalls and rocks with unique shapes and pavilions, which are elegant and unique.

The beautiful zig-zag bridge with its jagged shape is inspired by a traditional Chinese belief that evil spirits can only move in a straight line. Therefore, people who cross this bridge are protected from any evil spirits. Behind this bridge is a pseudo-Victorian pavilion from the Qing dynasty with a terrace, where you can enjoy the beautiful view of the lake.

The garden was originally the estate of a wealthy businessman, Lou Lim Iok. The family lost the property, and the garden was to be abandoned. It was later acquired by the Macau government and was reopened in 1974.

Now, Lou Lim Iok Garden is used to hold art exhibitions and music performances. The outdoor area is sometimes used for holding events, such as The Lotus Exhibitions.

There is also a tea house in the garden, which was opened in 2005. The building’s design is in the Portuguese style with a Chinese tiled roof. It is Macau’s first tea-themed museum, and it exhibits cultural relics related to Macau’s transmission of Chinese tea culture in the Western world. Admission to the garden is free and the opening hours are from 9:00 to 19:00 (closed on Mondays). They also provide a tour for the public from 15:00 to 16:00, on the Saturdays of the first, third and fifth week. 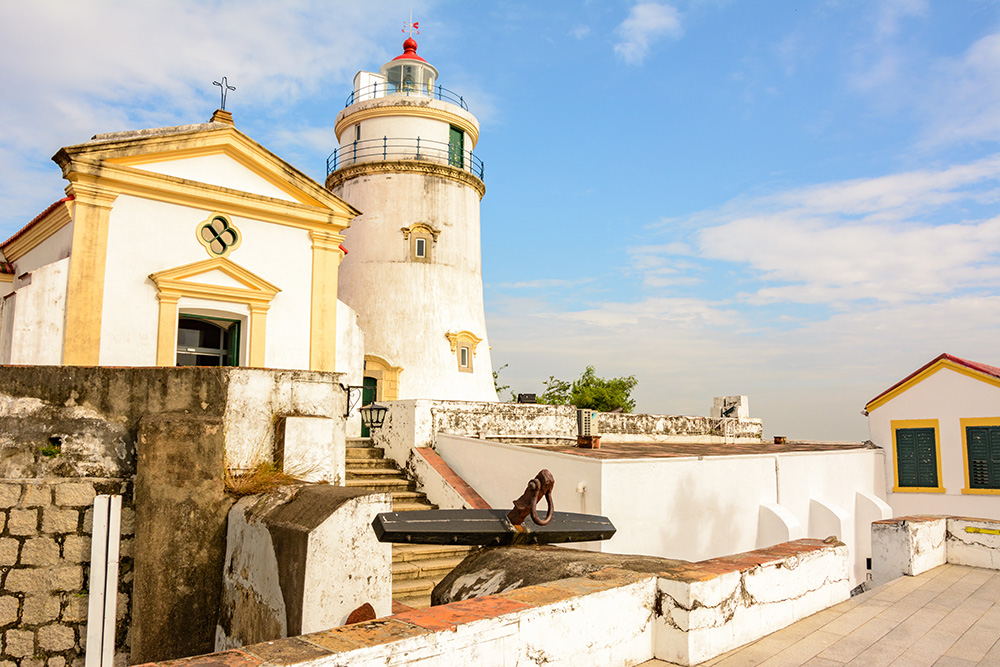 The Guia Chapel, the Guia Fortress and the Guia Lighthouse are listed as the three historical heritage sites of Colina da Guia, and they are all listed in the World Cultural Heritage List as part of the historical city of Macau.

The Guia Fortress is located on the top of Guia Mountain. It is the highest point of the Macau Peninsula, and was built between 1622 and 1638. In the past, it was mainly used for defensive purposes. The land the fort stands on is an irregular polygon, which covers approximately 800 square meters. Guia Chapel and the Guia Lighthouse are inside. Complicated tunnels, storage rooms and air-raid shelter systems were built there around the 1930s. These underground tunnels are between 47 to 456 meters long, and they are part of the military defense network and not connected with one another. Nowadays, visitors can only enter the 52m tunnel from the north entrance due to security reasons. At the same time, the Guia Fortress can also be used as an observation point for the arrival of ships or typhoons, and the typhoon signal symbol on the fort is one of the attractions for tourists too!

The Guia Chapel was built in 1622. The facade is simple and white. The nave and dome are supported by thick walls and buttresses. The roof of the church is covered with traditional Chinese red tiles. The church has a small sanctuary on the left. There is a small choir platform above the entrance of the church. There is a small bell tower on the left side outside the church which was once used to tell the time and to remind people that there were ships approaching.

When the church was restored in 1998, one of the embodiments of Macau’s multicultural spirit was found in the church- a fresco which fused Western and Eastern religions and myths.

Location: on the top of Guia Mountain

Chapel: 10 am – 5 pm (no photographs allowed)
Lighthouse: not open to the public 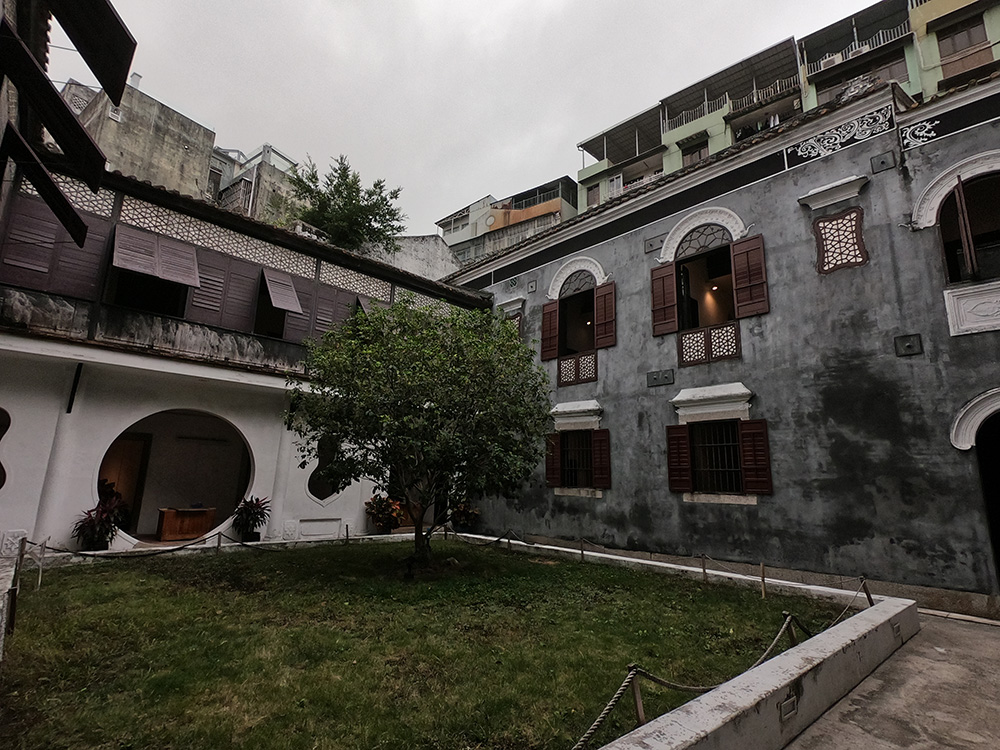 We can see there are some of the characteristics of Guangdong traditional houses in Mandarin’s House. There is an arched entrance which leads us to the courtyard, which separates the servant rooms, the master room, and the garden. However, unlike most traditional Chinese houses, the gate entrances of each foyer and the mansion entrances are facing northwest. The room area is composed of two traditional Siheyuan style courtyard houses, making the whole building rather exquisite.

The architecture style and the open space of Mandarin’s House have their own features, reflecting the advanced Chinese construction technology, which is mainly manifested in the superstructure of the residential area, building materials, gorgeous decoration, and the details of the doors and windows. At the same time, Mandarin’s House does not only include the traditional Chinese Lingnan style, but also subtly integrates western architectural elements. Through the treatment of the ceiling, the decoration of the doors and windows, and the use of gray bricks and mica windows from India, we can see the fusion of Chinese and Western features.

In the early 1950s, the Zheng family left and rented the big houses out. There was a great fire that destroyed the house. In 2001, the main house was seriously damaged, and the original structure could hardly be recovered when the property rights were acquired. Later, the government conducted an in-depth research on the style and features of the original Mandarin’s house in order to restore it. After eight years of hard work, the old Mandarin’s House was finally restored.

Open on public holidays and closed on Wednesday 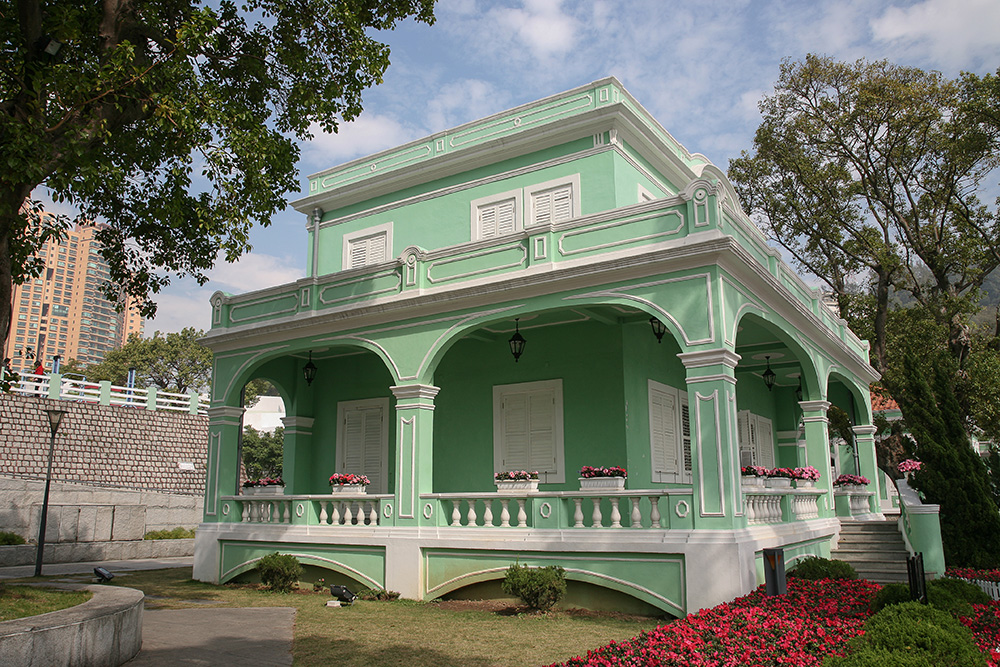 The Taipa Houses Museum is located on the Estr. de Cacilhas, Taipa, Macau. It is composed of five gorgeous emerald-green Portuguese buildings which were built in 1921. They are definitely good places to relax and to learn about the history of Macau.

The five buildings were the former residences of senior officials. They were recognized as a valuable building complex in 1992. Subsequently, the SAR government carried out restoration work on it and converted it into a museum called the “Taipa Houses Museum”, which was opened to the public in 1999. In 2016, the SAR government re-integrated these five buildings, giving each building a different theme and function, they are:

Macanese Living Museum. It exhibits the scenes of Macau people’s daily life in the past, especially the Macanese. The Macanese refers to the ethnic group formed by the intermarriage of Portuguese people with Chinese and Malays in Southeast Asia or Filipinos and Indians in South Asia.

Creative Casa. It mainly functions as a cultural information and sales platform in Macau. The first floor is an exhibition space, which is used to sell products and books of Portugal and Taipa. The second floor is used for temporary exhibitions.

Nostalgic House. It shows various aspects of the Macanese lifestyle in Macau and the development of Cotai through temporary exhibitions. The themes of the exhibition involve people’s livelihood, religion, architecture, classic cuisine, and the changes of Cotai.

House for Receptions. This is not open to the public and is mainly used for receiving distinguished guests and hosting other official activities.
For more information, click here

‘House for Receptions’ is not open to public.