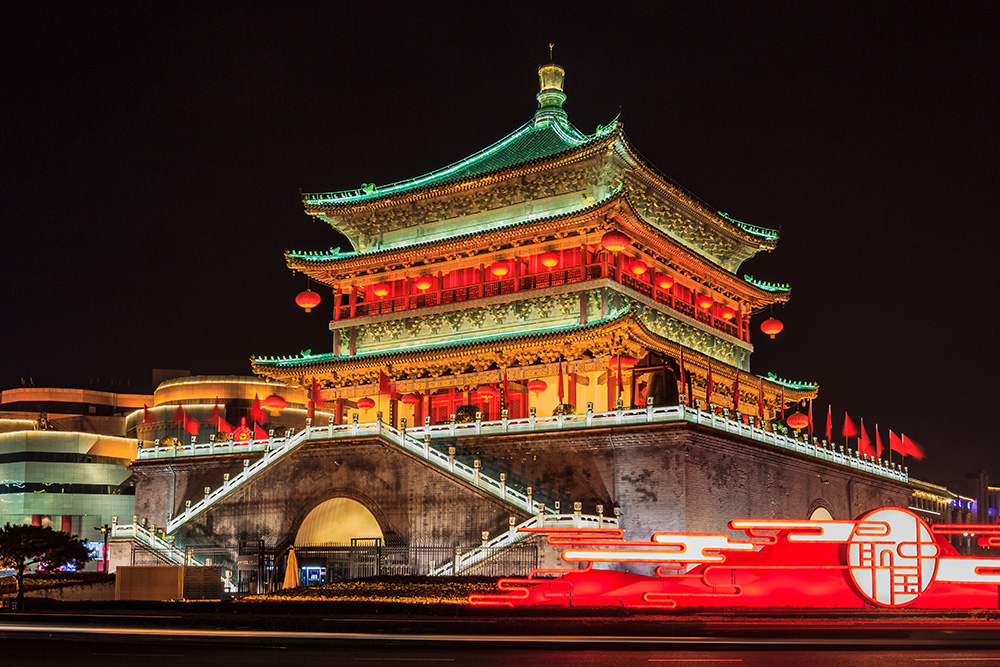 The Bell Tower of Xi’an was built in 1384, the 17th year of Hongwu in the Ming dynasty. It was originally located at the corner of Guangji Street, today’s Xi’an Street, facing the Drum Tower. In the past, a large bell was hung on the upper floor, which was used to mark the time, hence the name Bell Tower. The Bell Tower in Xi’an is the largest and most intact of all the bell towers in China.

The lower part of the Bell Tower of Xi’an is a square base made of traditional blue bricks. Above the base is a two-story wooden building. The roof is 36 meters above the ground, while the base is 8.6 meters from the ground. Each side is 35.5 meters long and the constructed area is about 1377.4 square meters. There is a staircase that allows people to ascend. The building is built in the typical architectural style of the Ming dynasty. The roof is a sloped pyramid supported by brackets, and the spire is a golden dome with real gold and platinum wrapped around a wooden core. The slightly tilted eaves are covered with dark green glazed tiles and the building is decorated with gold paint and carved beams. At the center of the four sides of the base, at approximately 6 meters high is an intersecting arched tunnel. In the past it was the main intersection where the four streets met, and people and vehicles would pass through the arches. However, with urban developments, the arch can no longer meet the needs of the traffic flow. Around the bell tower a highway turntable has been built, and there is a circular passage underground for pedestrians.

The Bell Tower of Xi’an is the largest, oldest, and best-preserved bell tower of its kind in China. In terms of scale, historical value, and artistic value, it ranks first among similar buildings in China. In 2006 April, it also won a silver award in a poll of the 50 most desirable tourist spots in China for visitors from abroad. 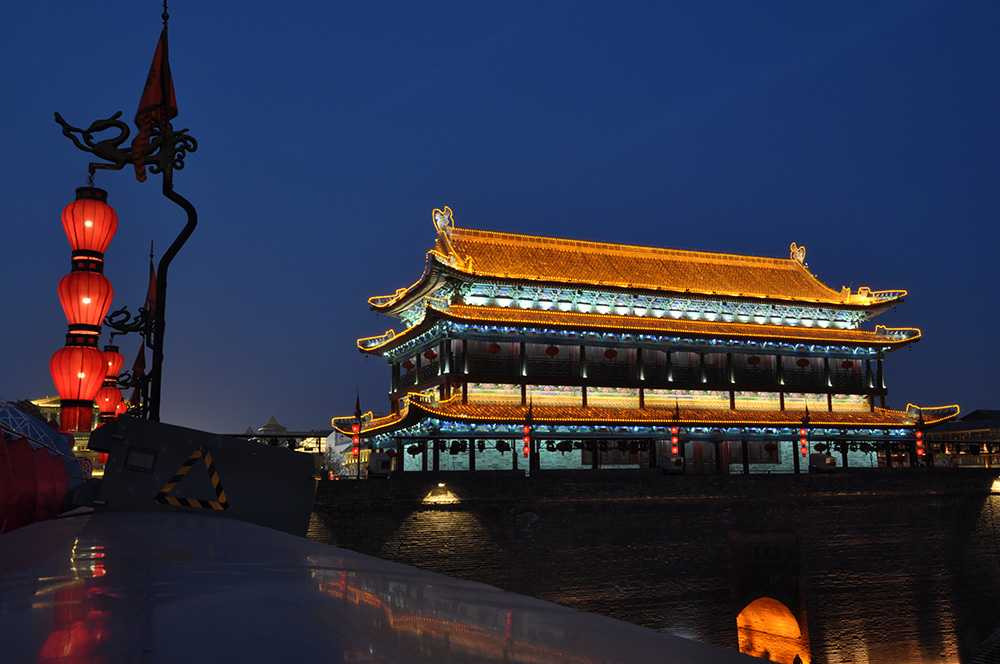 The Xi’an Ming City Wall is located in the center of Xi’an, Shaanxi Province. The wall is 12 meters high, 12-14 meters wide at the top and 15-18 meters wide at the bottom. It is a closed rectangle with a circumference of 13.74 kilometers. In ancient times, the city wall demarcated the city area; at that time the city covered an area of 11.32 square kilometers with the famous Bell Tower and Drum Tower located at its center.

Location: It is located in the central area of Xi’an, spanning Beilin District, Xincheng District and Lianhu District

The demonstrating the Opening Gate Ceremony of Tang Dynasty, every day at 9:30 am, at suspension bridge square outside of the South Gate. 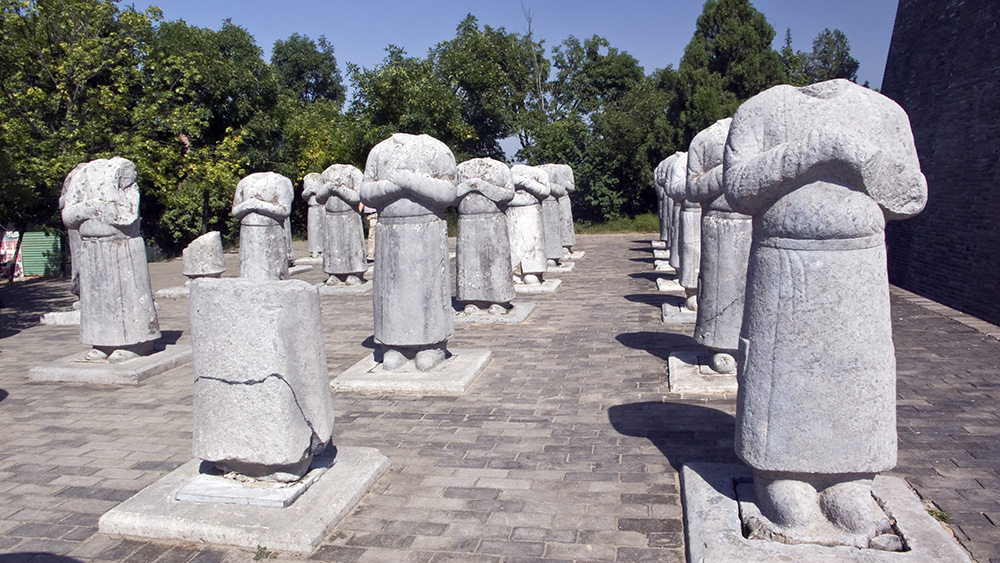 Qianling Mausoleum is located in Liangshan Mountain, 6 kilometers north of Qianxian County, Xianyang City, Shaanxi Province. It is one of the 18 Tang Mausoleums in the Guanzhong Region of Shaanxi Province. Qianling Mausoleum is the joint burial tomb of Tang Emperor Gaozong Li Zhi and Empress Wu Zetian. It is the only joint burial tomb of an emperor couple who were both emperors, in China and even the world. It was listed as part of the first batch of national key cultural relic sites.

The Qianling Mausoleum was built in 684 AD. It took 23 years for the project to be mostly completed. The mausoleum area imitates the construction methods used in the capital city of Chang ‘an. The mausoleum has two walls: the north and south. The inner city walls are 1450 meters long, the east wall is 1583 meters long, and the west wall is 1438 meters long. The total area of the inner city is 2.4 million square meters. On the four sides of the city walls, there is the Phoenix Gate to the south, the Black Tortoise Gate to the north, the Green Dragon Gate to the east and the White Tiger Gate to the west. Outside the south gate, there are two steles extolling the praises of Emperor Gaozong and Wu Zetian, as well as sixty-one stone statues of leaders of Chinese ethnic minorities and envoys from friendly countries who attended the funeral of Emperor Gaozong.

The Qianling Mausoleum is the only tomb with a double wall found in the tomb of a Tang Dynasty emperor. The inner city symbolizes the imperial city of Chang ‘an, and the outer city is the Guocheng where officials and local people lived. This reflects the layout of the ancient capital city of China at that time. Qianling mausoleum is also the only one in Tang dynasty tombs that has not been excavated and pillaged from for thousands of years. The masonry of the underground tunnels of the Qianling mausoleum have been discovered. There are thin-waisted iron bolts and tin and iron ingots, etc., which general tombs do not have and is therefore of unique value. 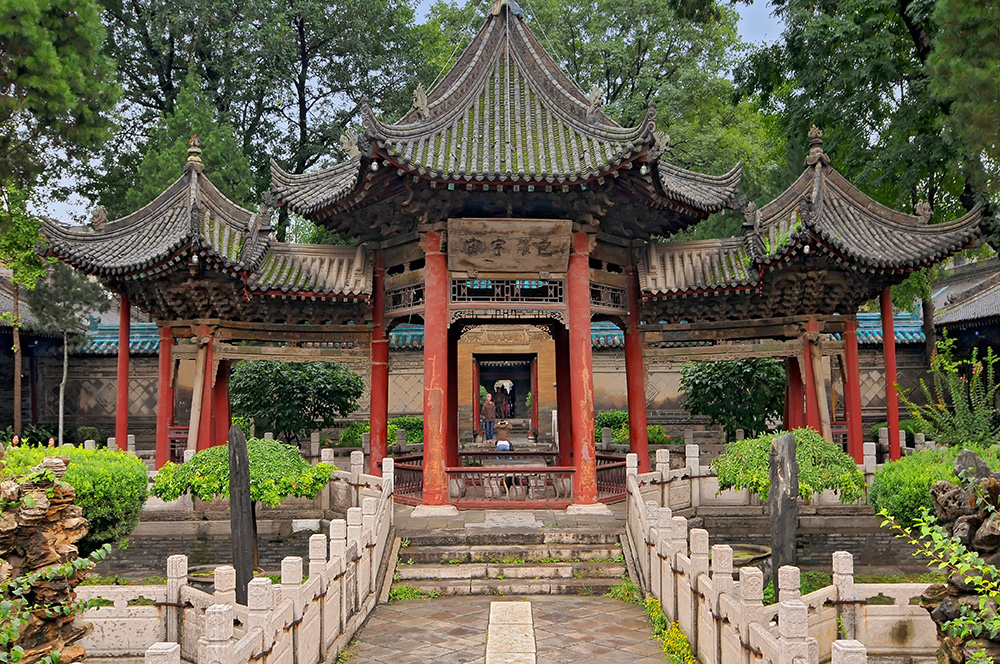 Xi’an Huajue Lane “Halal Alley”, is known for the Xi’an Great Mosque. It was recorded to have been built in the first year of the Tang dynasty’s Tianbao era (742 AD) and preserved by subsequent dynasties. Unlike many modern mosques, this mosque still maintains the architectural style of China’s ancient mosques. The building is a traditional Chinese wooden structure, but the overall architectural style is Islamic. This kind of architectural style is rarely seen nowadays. It is also very rare to see mosques with a long history that have not been reconstructed or modernized such as the Niujie Mosque in Beijing and Tongxin Mosque in Ningxai.

The temple covers a total area of 13,000 square meters. There is a wooden archway 9 meters high built in the early 17th century. The archway has a glazed tile roof with statues of mythical creatures and other refined carvings. The whole mosque from east to west forms a square shape and is divided into 4 courtyards. There are seven stone tablets in the hall, with inscriptions in Arabic, Persian and Chinese. In the second courtyard, there are authentic calligraphy works by the great calligrapher Mi Fu of the Song dynasty and Dong Qichang of the Ming dynasty. The fourth courtyard, there is a hall with an area of about 1300 square meters which can accommodate more than 1,000 people for worship. The mosque has more than 400 murals of Arabic patterns with unique compositions.

The architectural form of the Great Mosque is based on the Chinese national style. However, the layout of the mosque is arranged in strict accordance with Islamic guidelines. The carvings and pattern decorations of the mosque are in an Arabic style. However, it is amazing to see the combination of Chinese traditional architecture with Islamic style.

Leaving the mosque, you will find a street with delicious Muslim snacks, cakes, and other small dishes because this is the Muslim quarter of Xi’an. 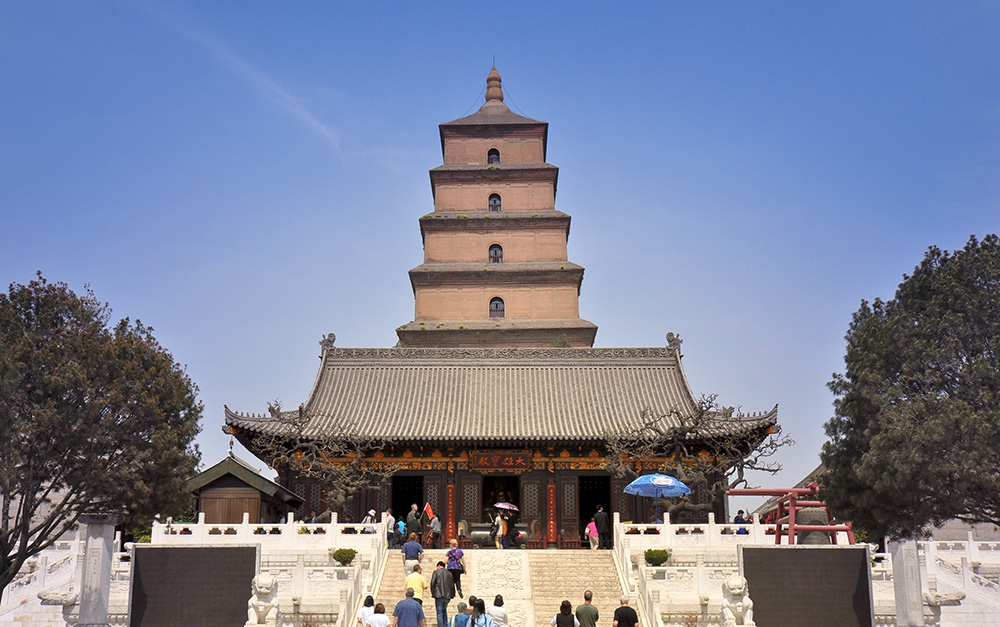 The Giant Wild Goose Pagoda is located in the Da Ci’en Temple south of Xi’an City, Shaanxi Province, and is also known as the Ci’en Temple Tower. In 652 AD, Xuanzang built the Giant Wild Goose Pagoda to preserve the Buddhist scriptures brought back to Chang’an by Tianzhu along the Silk Road. At first it had five stories, then it was built up to nine stories. The number and height of the stories continued to be changed several times, until it was finally fixed at seven-stories as it can be seen today, with a height of 64.517 meters and sides of 25.5 meters.

Giant Wild Goose Pagoda was announced as a national key cultural site by the State Council in 1961. The pagoda consists of three parts: the base, body, and spire, with a total of seven floors. The appearance of the tower is like a square pagoda, it is stable, majestic, and simple. It was an important symbol of the city in the Tang Dynasty and has become one of the most important landmark buildings in Xi’an now.

Giant Wild Goose Pagoda, as the earliest and largest existing brick pagoda of the Tang Dynasty, is material evidence that the pagoda, an architectural form of ancient Indian Buddhist temples, was introduced into the Central Plains along with Buddhism and integrated into Chinese culture. It is a landmark building that embodies the wisdom of the ancient Chinese masses.

The Giant Wild Goose Pagoda was previously modeled from the western region’s stupa, with a brick surface and a soil center that could not be climbed. Each layer built by Master Xuanzang himself contains various relics. After reconstruction and renovation, it gradually evolved into a brick and wood-like structure with architectural characteristics of the Central Plains and an accessible tower that can be climbed. This process vividly reflects the introduction of Buddhist architectural art into China and its gradual Sinicization. The steles “the Sacred Sages of the Tang Dynasty” and “the Preface to the Sacred Sages of the Tang Dynasty” further prove the transmission of Buddhism and its influence on the Giant Wild Goose Pagoda and spread along the Silk Road. The “Palm-leaf manuscript” held in the giant Wild Goose Pagoda is also a precious Buddhist relic.